I have always had a fascination with journalists. As a kid, I wanted to be Roger Ebert. That's not weird, is it? He is why I have this blog. I loved movies. I read his stuff. I fell in love with writing about movies, with being knowledgeable about them. I have to write about movies. It makes me happy. It is my great hobby in life.

There are some great movies about journalists and journalism. I really had to cut down my initial brainstorm for this post...quite a bit.


Of course, the first movie that came to mind was one that touched me (and so many others) so greatly. That movie is Cameron Crowe's semi-autobiographical love letter to journalism and early-70s rock, Almost Famous. I won't have it as a pick this week. It is too special. It tops too many of my movie lists to be considered here.

This week on Wandering through the Shelves' Thursday Movie Picks, the theme is Journalists, and I want to focus on movies about the ballsiest of them. Journalists who dare to publish stories that may very well get them in trouble, who told stories, true stories, that people didn't want told. Stories that make us angry or scared or both.

Based on a Vanity Fair article called "The Man Who Knew Too Much", Michael Mann's The Insider stars Al Pacino as Lowell Bergman, a producer for 60 Minutes at CBS, who takes on the story of Big Tobacco whistleblower, Dr. Jeffrey Wigand (Russell Crowe). I love Mann's style, simultaneously matter-of-fact and aggressive in digging at the truth and creating anger and fear. We feel Wigand's fear. We hate Brown & Williamson for their lies. We admire Bergman for having the stones to tell this story.

I'm quite certain that there has never been a more classic badass newsman as Edward R. Murrow. As played by David Strathairn in George Clooney's brilliant Good Night, and Good Luck, he is fully that and more. It is one of my favorite performances ever. This film tells the story of Murrow's team of fellow journalists at CBS, a group of pros bent on taking down Sen. Joseph McCarthy, a manipulative liar who made it his personal mission to bully and intimidate people into admitting ties to Communism. This is easily Clooney's best work as director, shot beautifully in black-and-white. 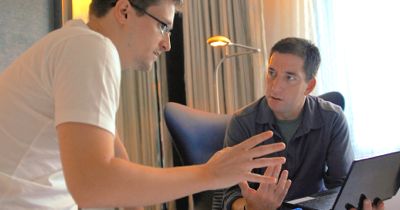 I'll admit. I didn't love this movie. I found it a bit dense and confusing at times. But it scared the shit out of me. It's director, Laura Poitras, is a journalist in the truest sense of the term. She documents the releast of the real. And makes it very well known how much she is hated by the U.S. Government. Since 2006, she has been on "watch-lists" for her hard-hitting investigations into governmental affairs. Fitting that she would be one of the three journalists, along with investigative journalist Glenn Greenwald and intelligence reporter Ewan MacAskill of The Guardian, chosen to help former-NSA contractor Edward Snowden tell his story, one of disgusting levels of government surveillance right here in our own backyard. The details of this story are enough to make you literally fearful about who's watching you. Big Brother is real, and Snowden wanted us all to know that. Poitras did her job well, and she has an Oscar to prove it.