Being that I am a teacher, I find it hard to pinpoint strong teachers in movies. There just aren't many movies that get it exactly right, as far as the day-to-day grind goes. TV has done quite a bit better than the movies, if you ask me (more on that later).

Now, I'm sure there are some out there. I just don't think I've ever seen them. It's almost as if I avoid movies about teachers. I think it hits too close to home.

There are some movie teachers out there, though, that inspire in lofty ways that provide plenty of entertainment and emotional impact for the audience. It's those that I've gone with week.

So, this week on Wandering through the Shelves' Thursday Movie Picks, it's Teachers. 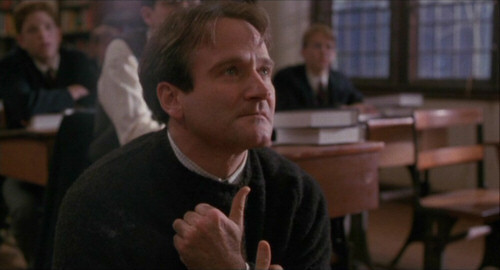 I'd say it's possible to be as good an English poetry teacher as John Keating, if you're a teacher at an all-boys prep academy in 1950s New England. Then again, look where that got him. Quite simply, this is one of the most beautiful films of my lifetime. It means so so much to me. I saw it for the first time in the class of my favorite English teacher, the Keating-esque Mr. Oliver, during my sophomore year in high school. It changed me. Robin Williams is perfectly cast here and finds the right blend of humor and sincerity in a film that leans towards the lofty and idealistic a bit (I see that now that I've gotten older). Nevertheless, it is a film I cherish, featuring a performance that made Robin Williams a true dramatic actor. And, as a lover of English literature, it really doesn't get any better. 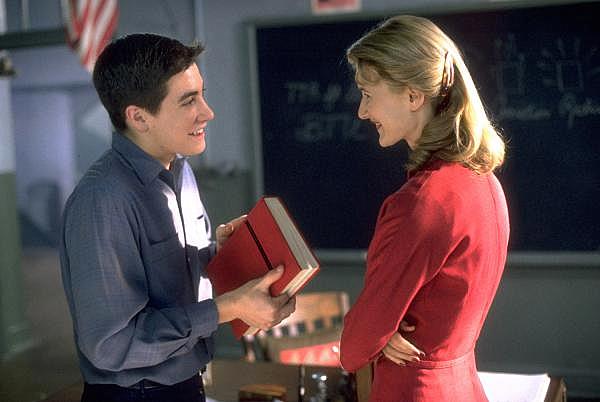 "False hopes? Do you want me to sit quiet, let 'em breathe in coal dust the rest of their life? How 'bout I believe in the unlucky ones? Hmm? I have to, Mister Turner, I'd go out of my mind."

Like Homer Hickam (Jake Gyllenhaal), I grew up in coal mine country. The town right next to mine to the north, in fact, was once called Coal Creek, Tennessee, home of a bloody labor dispute known as the Coal Creek War. To the west of my hometown is the City of Oliver Springs, an old coal mining town, so quaintly intact as such that the producers of October Sky chose it as the main filming location. Yes. Jake Gyllenhaal was right next door at one point. And I didn't even know him at the time. The true inspiration to Hickam, though, as this film suggests was his science teacher, Miss Riley, a true educator in that she believed in her students. She believed and trusted that these young men with dreams of rockets and satellites and "the final frontier" had it in them. They didn't have to be coal miners. And she was right.

Dewey Finn a.k.a. Mr. Schneebly in
The School of Rock
Dir. Richard Linklater, 2003 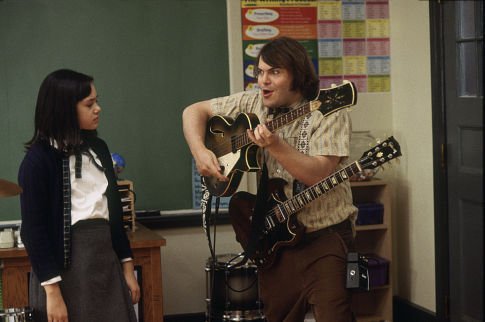 "Yes! But, you can't just say it, man. You've gotta feel it in your blood and guts! If you wanna rock, you gotta break the rules. You gotta get mad at the man! And right now, I'm the man. That's right, I'm the man, and who's got the guts to tell me off? Huh? Who's gonna tell me off?"

I thought this movie looked so stupid when it first came out. I totally blew it off. Then, I happened upon it randomly one day and was just blown away with how simply pleasing and funny it is. I also gained a bit of a higher appreciation for it when, as a first year teacher, my 8th graders likened me to Jack Black in his role as deadbeat rocker Dewey Finn posing as a substitute teacher at a private elementary school. My energy and looks (God Help Me!) prompted my students to create a Facebook page back then called "Mr. Powers look like Jack Black from School of Rock". So, anyway, I think this movie is funny and who doesn't love a sub who throws out the books and brings in the amps.

Steven Gilborn as Mr. Collins in
The Wonder Years - Season 3 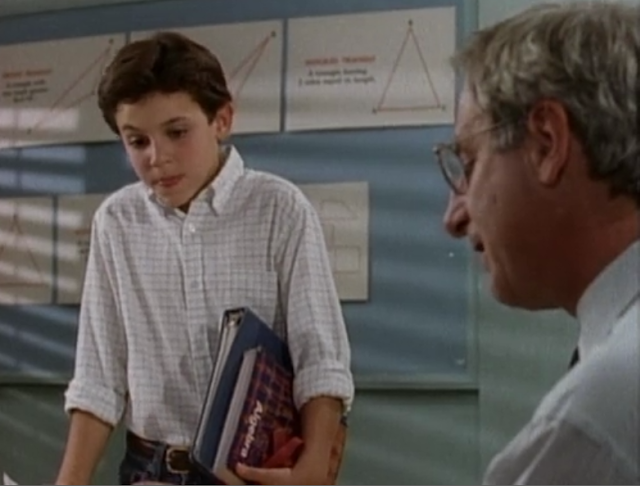 In a three-episode arc as Kevin Arnold's Algebra teacher, Steven Gilborn breathed life into a teacher character that we all know well. The hard, stern math whiz, who, at the end of the day, truly wants his students to learn. He takes a liking to Kevin, who struggles in 8th grade math. He takes him under his wing, tutors him, inspires him, and then, like that, is gone. Such a touching run of episodes of one of my all-time favorite shows. 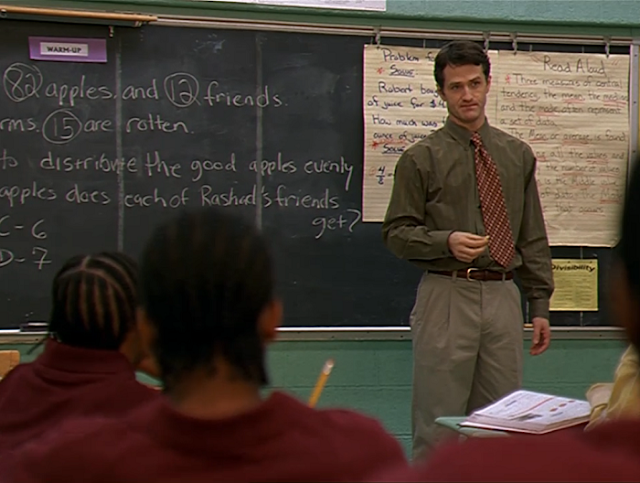 If you want to know the truth about the world we live in, I hope you watch creator David Simon's The Wire. It is without a doubt the most brutally true piece of cinema we have on inner-city crime, the drug trade, political corruption, failing schools, and cutthroat reporting. It took on each of these topics in its five season run. No season is more powerful than season 4, in which the writers took a deeper look into the children who become drug dealers and the teachers who TRY to teach them. After failing as a detective, Prez (a prominent character through the show's entire run) becomes a middle school teacher, forced to look straight in the face of the budding problems that will emerge as violence and drugs on the streets of Baltimore. To watch him fail and struggle and deal with the bureaucracy and ultimately succeed is just one of the many things this show gets perfectly right. I want to re-watch it now.