An Essay in Words and Images by Kevin Powers

Harmony Korine is not as weird as I once thought.

About 8 years ago now, I watched his debut feature film, 1997's Gummo, a semi-poetic journey into the extreme oddities of a small town. It is also semi-gross, intentionally. It made me feel dirty, but, by the end, I was smiling, mostly due to two soundtrack cuts, "Like a Prayer" by Madonna and "Crying" by Roy Orbison. Despite this, I never felt compelled to watch another of his films. I never decided whether I actually enjoyed it. How could I? I don't think it wants to be liked.

And I'm not sure whether or not his latest feature film, Spring Breakers, is meant to be liked either. But I am sure that this is a movie I liked. In fact, I think I love it. 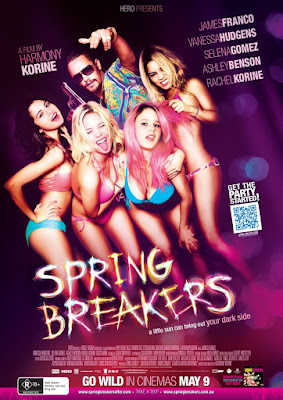 Written and Directed by Harmony Korine

Let's first talk about the casting, which, as someone with just a vague idea of the previous work of Selena Gomez and Vanessa Hudgens, is decidedly perfect. For one thing, it works with the idea this film so distinctly plays on, that being the unavoidable nature of American pop culture, in particular the notion of eye candy above all. And Korine fully respects the eye candy. Smart of him to use his wife as one of the four protagonists. It takes the creeper edge off a bit, since his camera is fully in love with these young women's bodies.

The whole idea of this film, as discussed by Korine in a recent interview with Marc Maron, stems from an image: young women in bright bikinis with guns and ski masks. Korine speaks at length of his viewing of images and videos of Girls Gone Wild-esque porn and how that led to the aforementioned image and the story that unfolded from its conception. And, indeed, Korine has made a film where these images bombard us in highly-stylized, seemingly frenetic way, the end result of which seems anything but. The visual style is everything, and made even more powerful by the cyclical editing that adds layers to the coolness of the whole thing.

And this movie is incredibly cool to look at, shocking but not disgusting, completely fictional but somehow real. I can't describe how effective this is in creating a satire, whether it is intentional on Korine's part or not. He is a filmmaker that is adamant that some sort of message is not really ever a goal of his, yet there is one here. It is an excessively hyperbolic work about the obsession with youthful freedom and the allure of sex, drugs, money, and violence, the result of a generation raised on MTV, Spring Break, and Grand Theft Auto: Vice City and all the colors and sounds and behaviors that come along with them. Things that I was sucked into myself but never fully attached to.

The soundtrack cut of this film belongs to Britney Spears. I remember pompously disregarding Britney Spears' music. By the time she hit her stride, I was blasting into the past with my collection of old records (a gift from my mother), being overtaken by the 1960s and 70s, finding my own cool in Bob Dylan, The Beatles, Led Zeppelin, Steely Dan, etc. But the current culture was still there. At the same time, I was a regular viewer of MTV's The Real World and TRL. I wanted to go to Spring Break but never did. My own body image and music taste not matching the hotties in fluorescent bikinis. But how even I crave those images, attainable in real life to some but certainly not myself.

With Gummo as my only reference to Korine's directorial work, I found the actual presence of plot (if small) in Spring Breakers an eye-opener to just how talented he is visually. The plot is simple: Four college-age hotties want more than anything to head to a Florida beach for Spring Break. They have no money. They are the virginal good girl, Faith (Selena Gomez) and her three wild child friends, Candy (Vanessa Hudgens), Brit (Ashley Benson), and Cotty (Rachel Korine). How will they get the money to make their pop culture pilgrimage? They will rob a diner. Once in Florida, they find themselves in jail after hosting a motel party. A cornrow-wearing, gold-capped career criminal called Alien (James Franco) bails them out and a crime drama unfolds. Watching it unfold is more fun than anything I've watched all year. And James Franco's maniacal work here is the key element. He goes there, all the way, and it is amazing to watch.

Consider a sequence that flashes forward and back to an Alien-led crime spree around a cover performance of Britney Spears' "Everytime," the film's heroines adorned in short shorts, bikini tops, and Pussy Riot-style ski masks, as the Britney version takes over and plays in its entirety. This recalls us to an earlier scene in which the four stars roll around in a convenience store parking lot singing her seminal hit, "...Baby One More Time." Every bit of the filmmaking here is of the highest artistic order. Violently poetically ironic and weird.

But didn't you already say "Harmony Korine is not as weird as you once thought"? I did. But the thing here is that it is a weirdness connected to reality already formed in our minds. We hear tale of the sex and drugs of Florida beaches on Spring Break, and we conjure images of liquor bottles and stacks of Natural Light cans and white sands and bright bikinis and dudes with washboard abs and beautiful young women.

Some have probably condemned this film as a work that glorifies something condemnable. But this film makes no judgments. It simply exists as a colorful dreamscape of sex, drugs, money, and violence. It is Pop Art, and it is impeccably realized. When I think of the films I've seen associated with Harmony Korine (Kids, which he only wrote, and Gummo), it's easy to draw out a major theme among them. He wants to expose the dark side of youth, the desire for those things listed above because they look and seem cool. They are glorified already. Korine doesn't desire to tell the truth, or even show the truth, and there are an immense amount of surreal imagery and totally unfathomable events in this film, but there is a truth there. Spring Breakers paints a truth in its weirdness about a society of young women seeking power...and sex and drugs and money and violence, just like the boys.

It's only weird because we've never seen it in such vivid color, even if we think we have. Some may have seen it, but not me. I never went to Spring Break proper. That's where this movie comes in.