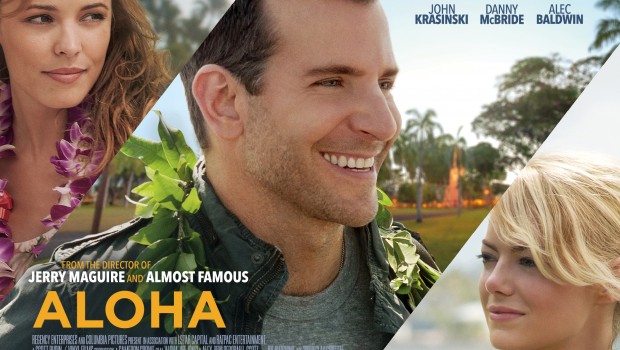 I wasn't too far into my screening of Cameron Crowe's Aloha before I finally turned to my wife and said, "Do you have any idea what the hell is going on? I mean what is this even about?" She replied, "I know, right?!"

Here is a movie with so many things going on, there wouldn't be a way to develop them, no matter how good you are. I read one of the many bad reviews of the film shortly after it ended, which basically said that this is a movie that could afford to be a bit longer. I couldn't agree more. It could also afford to go back to the fundamentals. There is no uniform tone, even in the performances. It bounces from here to there with no aim whatsoever.

I'll admit. I get stoked for new Cameron Crowe movies. Like so many, I have a deep love of his finest movies. John Cusack holding a boom box over his head in Say Anything. Tom Cruise finding what completes him in Jerry Maguire. Patrick Fugit, the young rock critic, pouring over his ever-lengthening profile of a band on the rise in Almost Famous. These are classic films. Classic. Since Almost Famous, Crowe has had trouble getting one to stick. Vanilla Sky is great, but it isn't really his movie. He adapted it from a Spanish film.

I was absolutely in awe of the promotional material for Elizabethtown, a sort of retelling of Jerry Maguire, but, when I went to see it, I found myself deeply underwhelmed. 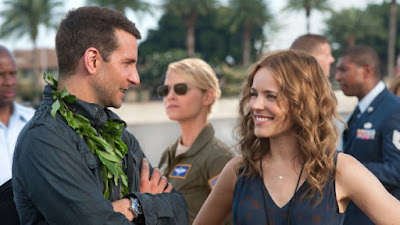 Here comes Aloha, a retelling of Elizabethtown, but this time in Hawaii instead of Kentucky. It is maddening how bad this movie is, especially when there is so much good about it.

The cast is filled with undeniable talent. Bradley Cooper stars as Brian Gilcrest, a former...well... honestly I have nary a clue. The film so quickly throws around his backstory, we can't possibly keep up or comprehend, but he used to have something to do with the Navy in Hawaii and now works for a billionaire contractor named Carson Wells (Bill Murray). His watch dog while in Hawaii is Navy Captain Ng (Emma Stone), a part-Hawaiian, part-Chinese, white girl. Then, there is Gilcrest's former girlfriend, Tracy (Rachel McAdams), her husband, Woody (John Krasinski), and their two children. His former best friend (Danny McBride) is around but totally underdeveloped. And then there's Alec Baldwin, who just yells a lot, sort of like he did in Elizabethtown.

I can't really summarize the story, since I don't understand anything about Gilcrest's job or goal or anything, but I can say there are some threads that would've worked if given some time. 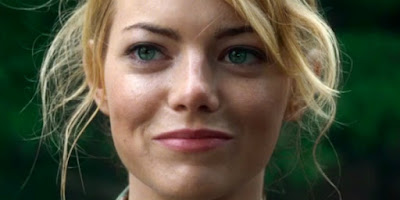 I happen to like Emma Stone here more than anybody else. I mean the whole "this movie is racist" bit doesn't really play. She's also half-Swedish. She is playing the Manic Pixie Dream Girl, a term coined for Kirsten Dunst's character in Crowe's Elizabethtown. She's the crazy, dreamy chick meant to bring Gilcrest out of his funk, make him the man he's supposed to be. She is good at this, smily and charming and it sort of works.

What really works is the whole Hawaiian mythology/mysticism that runs briefly through the movie. I loved the passion for Hawaii and its people, brought forward by the Stone character. There is a scene where she and Gilcrest visit a small village of Hawaiian natives to make some sort of deal with cell towers or satellites or something and the way Captain Ng connects to them and their home and speaks to them is just lovely. THIS is a lovely scene, cinematically gorgeous, meaningful, leaving a lasting mark. THIS is what the movie was originally intended to be. I'm certain of it. It's not the girl meant to save him. It's the place. It doesn't pan out, mostly due to the overstuffed cast that just doesn't develop into anything. 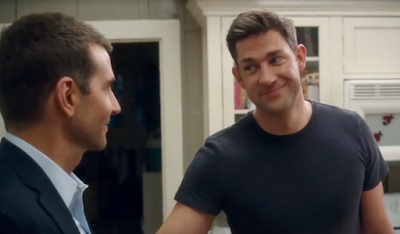 Similarly, the revelations that come through Gilcrest's reconnection with the Tracy character, her husband and family, work fairly well. John Krasinski, playing a Navy pilot with little to say, is really well-cast and has some great scenes with Cooper that provide some unexpected, quite original humor. Her son, Mitchell (Jaeden Lieberher), is obsessed with the lore of the islands as well. And her daughter, Grace (Danielle Rose Russell), is learning Hula and factors into the story in surprising ways. Again, THIS is what this movie was supposed to be.

But Bill Murray and Danny McBride and Alec Baldwin and all this other incomprehensible work life stuff just doesn't play. It's too much. And it's unfair to put such fine actors into a story that doesn't have room for them.

Aloha ends on such a beautifully touching note that I can only wish that what came before made enough sense for me to feel it. The only feeling I got was that Cameron Crowe set out to make a movie about Hawaii, the cast bought into it, and then, in post-production, what came out was just as lost as the main character.