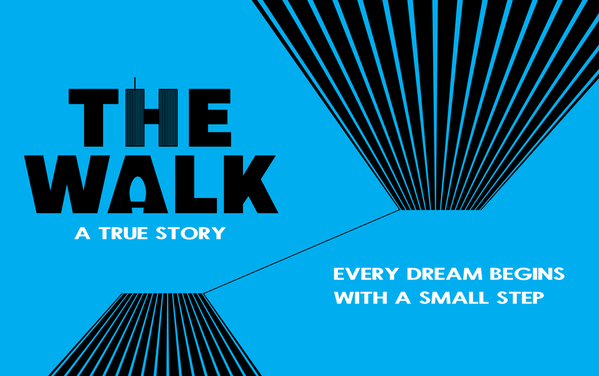 Or Man on Wire?

The Walk is more of an experience than a movie. The only option at our local multiplex was IMAX 3D. There is, I'm sure, no other way.

Now, I rarely watch a movie in 3D if given a choice. I just don't like wearing the glasses. The Walk is only the second one I've seen, after 2012's Life of Pi, that actually looked good. And this one does look good. At times, it even looks great. And, at one point, it is absolutely awe-inducing. 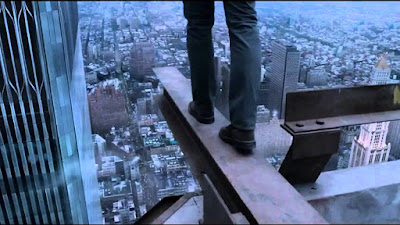 I won't keep it a secret. This is not a spoiler. The best part of this movie is exactly what the title suggests. It's the bit where, in August of 1974, French performance artist Phillipe Petit (Joseph Gordon-Levitt) walks unsecured between the "twin towers" of New York City's World Trade Center on a tightrope. The feat of visual effects pulled off here by director Robert Zemeckis and his team is nothing short of amazing. It demands to be seen on that huge screen with flimsy glasses on. It does full justice to just how effin' crazy Petit really was, and how much of him went into this amazing feat of human possibility.

The rest of the movie is a story better told in James Marsh's 2008 Oscar-winning documentary, Man on Wire. It is more detailed, more revealing, and it features the real Philippe Petit, a man who says things like, "Life should be lived on the edge of life," and we don't dare roll our eyes. He is one of the few people who can truly get away with saying things like this. He Carpe Diems and YOLOs like nobody else in this world.

Joseph Gordon-Levitt is surprisingly effective as Petit. I say "surprisingly" because I was unsure of how well he would pull it off. He does Petit quite well, most likely due to the work he did with the real life showman in preparation for this role. He has the build, the mannerisms, the intensity, even the accent. And his origin story here is fun to watch but lacks any sort of real depth. 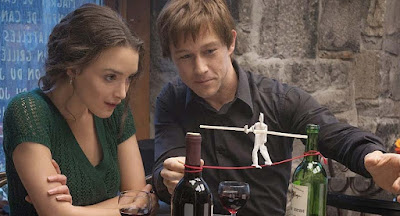 The weakness of this film is the lack of development in the supporting characters, including, most importantly, his girlfriend Annie (Charlotte Le Bon) and best friend Jean-Lois (Clément Sibony). The relationships are glossed over, played up for humor, the story being told, rather than shown, in a voiceover narration by Gordon-Levitt as Petit that is totally unnecessary save the very final moment, which is quite touching.

The Walk does well in maintaining a light, comedic tone, and plays up the caper aspect of the story in fun ways, but the documentary offers a much clearer depiction of the cast of characters that would become Petit's accomplices in what amounts to one of the most daring heists ever actually pulled off. Petit's dream, his mission, to hang his wire up there and walk on it was extremely illegal and required a small Ocean's Eleven-esque crew to pull it off. No matter which film does the storytelling better, they are both highly entertaining. This story itself is cool enough to compel pretty much anyone, no matter the approach. 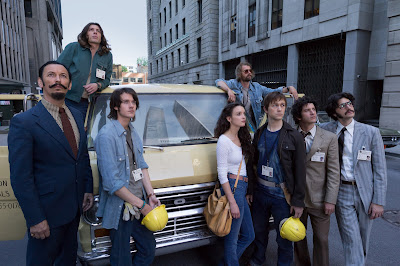 Robert Zemeckis has made a career of pioneering the newest technologies in visual effects. He made his bones in the 1980s with the Back to the Future trilogy, then went on to Oscar glory with Forrest Gump, which seamlessly integrated real life television footage with the actors. In between and after, he has made a long list of films that push visual boundaries: think the makeup work in Death Becomes Her or the integration of cartoons with a period detective story in Who Framed Roger Rabbit? Remember also his work with motion-capture animation in his adaptations of Beowulf, The Polar Express, and A Christmas Carol, or even the opening sequence of his previous film, the multi-layered story of an alcoholic pilot, Flight.

With The Walk, he has focused all of his visual energy, as he did with Flight, in one flawless sequence. And that one sequence is one of the most powerful experiences I've ever had in a movie. I was literally sweating. My heart pounded. I teared up. I Oooh-ed and Aaah-ed. I muttered things like, "How the hell did they do that?" under my breath.

However, Flight was a film so rich in character development and crushing drama that the one scene of visual effects perfection was only an added bonus. Here the one scene is preceded by a movie that is entertaining throughout but really just okay. It looks great, even in 3D, all the way through, but it doesn't add anything we don't already know to Petit's story.