I hate to say it, but I just had to put down the Thursday Movie Picks for a few weeks. The Halloween themes just didn't happen for me. It's just not my holiday, not my conversation.

So, it's Thursday, the leaves have fallen here in East Tennessee, and I'm back again (and from here on out) for a bit more of Wandering through the Shelves' Thursday Movie Picks. This week, it's Movies about Making Music.


I could've gone with a number of great movies, but I fear (and know) I've used some of my favorites in other categories. So, I'm going with nostalgia on this one--three movies that touched my heart with stories about lovable people, who make music.

Sprawling in scope but tight in focus, Mr. Holland's Opus is one of my happiest movie memories. My Mom took my little sister and I to see it in the theater. I think we went back the next night and saw it again. This is a movie about a man who LOVES music. The man is Glenn Holland (Best Actor nominees Richard Dreyfuss), a classical composer, who, as a newlywed in the early 1960s, finds employment as a high school orchestra and band instructor. Over the course of 30 years, through ups-and-downs, both personally and professionally, he comes to find, not regret in letting go of his dreams, but warmth in knowing that his life itself was a perfect piece of music. The movie is a bit obvious, a bit sappy, but it is a work of love that pays tributes to education and teachers, music and musicians, and, most of all, how all of those things inspire everyday. And the soundtrack is unreal. And the cast is amazing! Look it up. 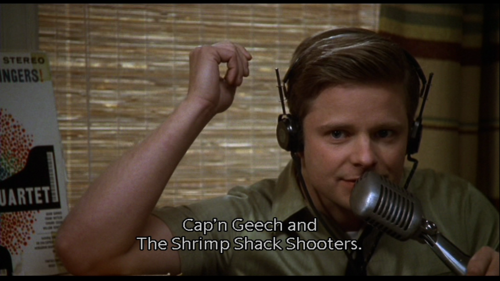 This gem is what happened when Tom Hanks decided, in the mid-1990s, to try his hand and writing, producing, and directing a movie for the first time. It's the 1960s in Erie, PA, and a local band called the One-ders finds some luck when they lose their drummer (Giovanni Ribisi) to injury and happen upon a local jazz nut named Guy Patterson (Tom Everett Scott). When he decides to up the tempo on one of Jimmy's (Jonathan Schaech) brooding ballads, everything changes quickly. The One-ders (pronounced Oneders) make a demo and find they have a huge hit (which may be the worst, or best, thing possible, depending on how you look at it). This movie is plain fun! It's worth watching simply for Steve Zahn. He may be the funniest guy alive. Where is he?

Oh, sweet beauty! What a simple, lovely experience John Carney's Once is. Struggling Dublin musician Guy (Glen Hansard) meets Girl (Market Irglova) and, over a short period of time, finds himself inspired, in love, and in full swing of making the best music of his life We get to see it all unfold and hear it as well. This is one of those crowd-pleasers that pretty much worked for everybody that year. I even got to see the duo (who fell in love in real life and became the band, The Swell Season) live at Bonnaroo the following summer. A great show! 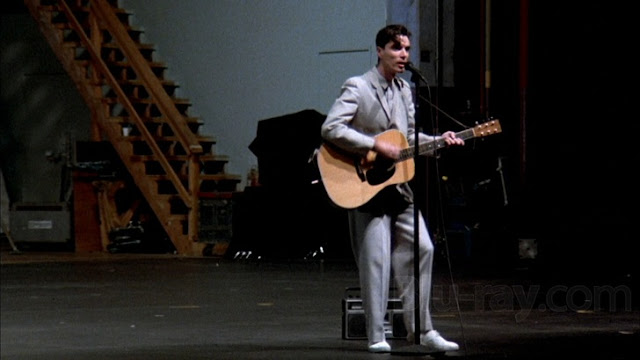 To see Jonathan Demme's 1984 concert film for Talking Heads is to see the process of making music come alive in real time. It is simply the best concert film ever made, capturing a performance that unfolds slowly, perfectly. The way this show starts stripped down, adding layer after layer with song after song until a musician in David Byrne and his band Talking Heads emerge to the height of their power is just awe-inducing. It made me a true believer in this band and, quite simply, the power of live music once and for all. I never looked back.

Email ThisBlogThis!Share to TwitterShare to FacebookShare to Pinterest
Labels: Movies About Making Music, Mr. Holland's Opus, On a Thursday, Once, Stop Making Sense, That Thing You Do!, Thursday Movie Picks