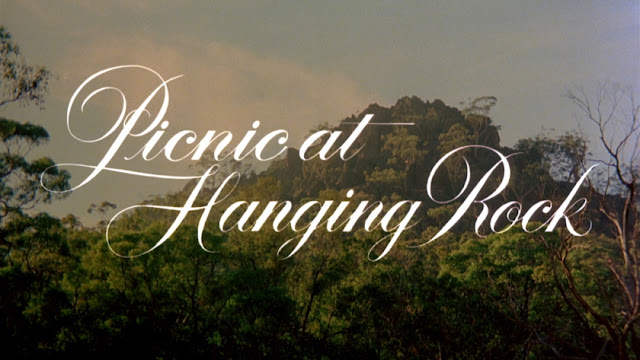 "Everything begins...and ends...at exactly the right time and place." - Miranda

The minute Picnic at Hanging Rock ended I immediately wanted to watch it again. Its shining quality, its dreamy and mysterious aura, clung to me in ways only certain films and television dramas have. I decided to keep my rented-from-Netflix Criterion Blu-Ray for another day or two. I did watch this movie again. I had to. It was even better the second time.

So, what brought me to this movie, my December Blind Spot pick? Well, first and foremost, Roger Ebert's Great Movies series was my inspiration for my Blind Spots this year. It's in there. He called it "a film of haunting mystery and buried sexual hysteria." Then, of course, the Criterion Collection Blu-Ray release about a year ago this time put it on my radar big time. The Criterion obsessives I follow on Instagram were all juiced up on this one. That's all I needed, but here's the real kicker: Right before I watched it, I did a little Wikipedia research and found that Peter Weir's first work to find an American audience informed the look of one of my favorite films of all-time (Sophia Coppola's The Virgin Suicides) and this inspired a theme in this year's best TV drama, The Leftovers (show-runner and genius, Damon Lindelof cites Weir's unabashed hold on the mystery as his inspiration for season 2 of the series). What more did I need?

It may have been too much.

All I could think about as I watched Picnic at Hanging Rock the first time was how familiar it seemed. From the compositions, girls in white lace scattered in a wood, to Gheorghe Zamfir's pan flute on the soundtrack to Peter Weir's insistent vision to fully haunt the audience with unanswered questions and confusions, creating an irony that is exactly what I look for in a great story. It starts with questions and just raises more, as the best mysteries do, and its setting of Australia, a mystery by itself, only adds to the sensations evoked by the film. 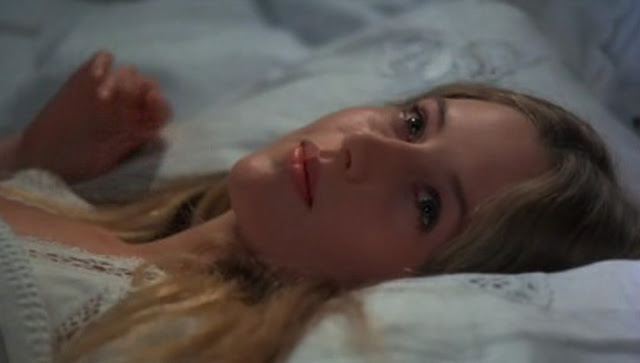 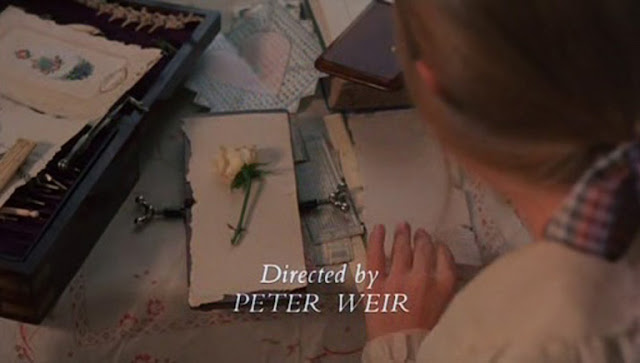 At the Appleyard College, an all-girls private school, circa 1900, a series of luscious establishing shots find the young lovelies of the school enraptured by romantic lines of poetry from Shakespeare to Poe. It is dreamy from the start. It is St. Valentine's Day. The headmaster, Mrs. Appleyard (Rachel Roberts), a hard woman, has arranged for the girls and a couple of the teachers to go to Hanging Rock for the day, where you can "remove your gloves" and relax a bit, have a picnic, get in touch with nature. "Do not wander off in the rocks," she warns.

Led by the loving Mlle. de Poitiers (Helen Morse) and the odd Miss McCraw (Vivean Gray), the girls journey in the coach of Mr. Hussey (Martin Vaughn). After the picnic, Mr. Hussey and Miss McCraw notice their watches stopped at 12 Noon, "something magnetic" perhaps. A group of girls wander into the rock and begin to climb. They are the lovely and fair Miranda (Anne Lambert); fun-loving Irma (Karen Robson); the bespectacled and thin Marion (Jane Vallis); and the oafish, whining Edith (Christine Schuler). Mlle. de Poitiers watches them as they leave. Miranda waves goodbye, a "Botticelli angel." 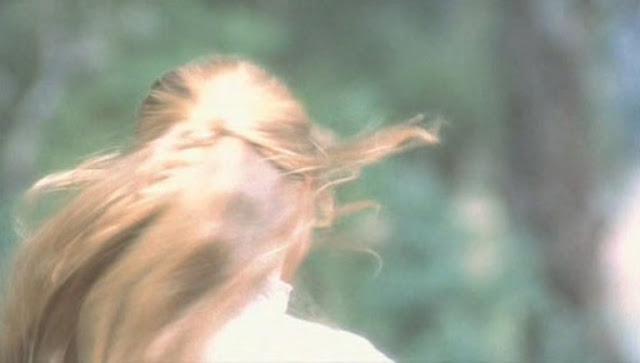 Back at the school, the waifish Sara (Margaret Nelson) is forced to stay back. Poor and unable to pay her tuition, Mrs. Appleyard makes Sara her target for ridicule and punishment, forcing her to recite poetry she so rebelliously refuses to memorize. Sara pines for Miranda, her roommate. She is one of the several characters soon to be haunted, just as the audience is.

In quite simply one of the finest sequences I've ever seen in a movie, the girls stagger up the rock, winding around, over and under. Edith complains, though she said she wouldn't. Miranda leads. Irma brings up Sara's obsession with Miranda. They talk and laugh. Skirts flowing in the wind. An elderly wealthy couple picnic in the woods as the girls pass. Their nephew, Michael (Dominic Guard), spots the girls as he shares a beer with the family's driver and farmhand, Albert (John Jarrett). Michael is haunted already...by longing, the vision of Miranda walking away through the woods. He will be more so soon. The girls continue on their path, a strange hum fills the air, a fever dream takes hold, the girls dreamily wander and gaze, that unreal pan flute piece fills our ears, back to the strange hum. The girls disappear. All save Edith, who goes back to tell the tale, a tale that can't be told, much less believed. 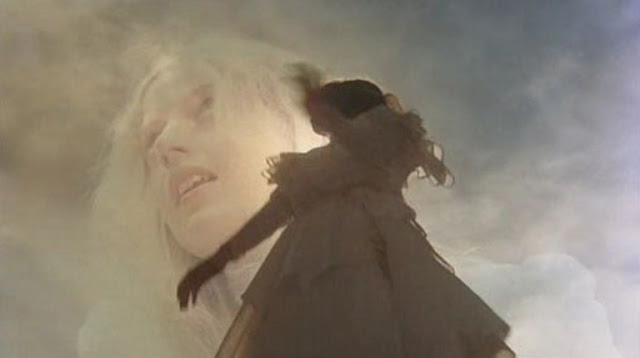 I would imagine this film might infuriate some people. I find it just right. Peter Weir is a filmmaker who has never really done wrong for me.  Looking at his filmography, I still have quite a few to see, but he has made some of the most lasting films of my life (Witness, Dead Poets Society, The Truman Show). Add Picnic at Hanging Rock to the list. It just works on so many levels. More than anything, I love it for Weir's vision alone. His insistence on focusing on the questions and the longings and pain for the missing are worth more than solving the mystery. He riddles the audience, showing returns to the girl's path on Hanging Rock through multiple characters, multiple times, offering small clues and details we might have missed and may not mean anything.

The most relatable character (for me) is the Michael character, the young man longing for something he never could have had anyway but definitely can't now. His instant infatuation with Miranda (in only a glimpse) turns to obsession in her absence. He has to find her. He can do nothing else. We are right there with him, for we love Miranda as well. There is so much truth in all this. The desire for the unattainable being one of the classic themes in all of literature.

But consider this stroke of genius. Instead of only focusing on Michael's obsession with the missing, Weir and screenwriter Cliff Green, working from a novel (based on actual Australian lore), offer Sara, also longing for Miranda and in an even stronger way. They also offer the obsession of Mlle. de Poitiers, so desperately seeking closure. And then Mrs. Appleyard, losing her school over this in more way than one. And there's Minnie (Jackie Weaver), the school house maid, feeling the absences, as she falls in love with a school groundskeeper. 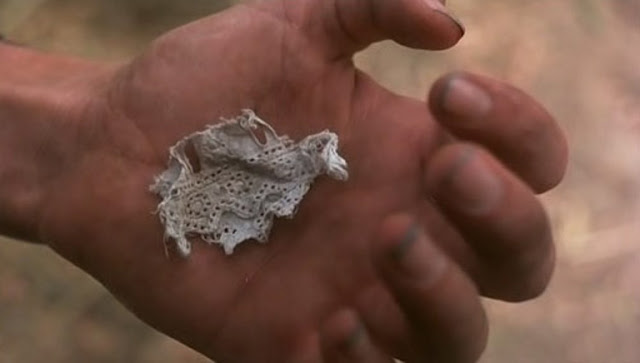 For a film that runs the risk of pissing people off, it sure has a connection for everyone. Like the best missing person mysteries, it becomes more about the mystery and the people left behind. It is a meditation on longing and repressed sexual desire more than it is a procedural. It embraces the supernatural dreaminess I love so much. And it does these things in every frame. Director of Photography Russell Boyd (BAFTA Winner) is a key to the success of this. He claims to have covered the camera lens in sheer lace in some instances, creating the ethereal beauty of the film, especially in the early scenes.

There is so much to see in Picnic at Hanging Rock. It demands to be seen many times. I feel like I could watch this film everyday and never grasp it completely. It doesn't want to be grasped, only wandered through as a path on rock through a wood, or wondered about, curiously, a search for something we may never find but that we desperately want to haunt us.