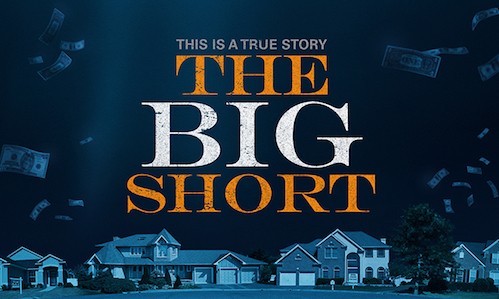 Not only is The Big Short the best movie of 2015, but it is also the most important. (Yeah. You read that right.)

It is, at once, the funniest comedy of the year and an equally searing drama. It is fun and funny, frightening and anger-inducing, heartbreaking and true, featuring a cast of some of the best male actors in the business. It stars a lead actor in Steve Carell, who continues to prove, after last year's Foxcatcher, that he is one of our finest screen actors. It is directed with style, wit, and intense feeling by Adam McKay, whose previous credits include Anchorman, Talladega Nights: The Ballad of Ricky Bobby, and Step Brothers. He started out as a writer on SNL, now he has co-written and directed an Oscar-worthy masterpiece.

The Big Short tells one story, the story of how the largest investment banks in our country, under little regulation, and with the backing of the United States Treasury, robbed millions of Americans of homes, then jobs, took no blame, received no punishment, and then got the American taxpayers to bail them out. It is really as simple as that. Of course, it is that because it is so complicated no average American taxpayer could begin to know where to point the blame. So, who do we point it at? Well, just listen to Donald Trump's sickening rhetoric...we "blame immigrants and poor people." 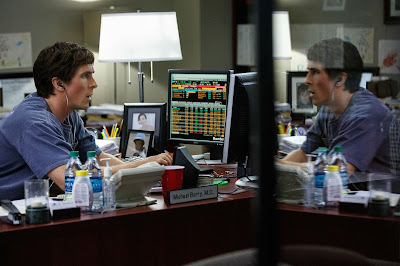 In 2005, a hedge fund manager named Dr. Michael Burry (Christian Bale) noticed a trend in mortgage loans. It seemed people had, for years, been taking really bad sub-prime, adjustable rate home loans. Loans doomed to go into default. Because for so many decades, the housing market had been considered such a safe investment for banks and our government, everybody turned a blind eye. The fact that Dr. Burry has a glass eye, well, that is just how clever this movie is. He clearly sees an opportunity to capitalize for his investors, and, with full autonomy, creates what came to be known as a credit default swap, essentially allowing him to bet a billion dollars against the housing market. The investment banks all but laugh him out of the room. He doesn't care. He has Asperger's Syndrome, wears shorts and a t-shirt to the office, goes barefoot, has a bad haircut, and listens to heavy metal at full blast in his office.

Meanwhile, an investment banker named Jared Vennett (Ryan Gosling) catches wind of what Burry has done and enlists an outside trader, the mad-at-the-world anger management case Mark Baum (Steve Carell), and his team of traders, to go in with him on a deal to purchase some of these credit default swaps. Also keyed in on this idea, by accident, are two young would be investment bankers from Colorado, Charlie Geller (John Magaro) and Jamie Shipley (Finn Wittrock), who track down the paranoid recluse and former big banker, Ben Rickert (Brad Pitt), to help them get in on the action. 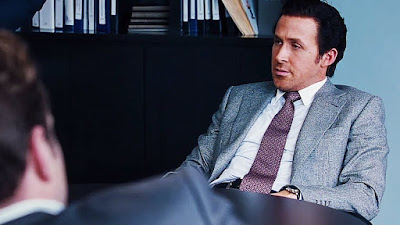 By the end of this film, all of these men will become insanely rich but not without an equally insanely rich internal conflict, which is what makes this movie so perfect.

The screenplay, based on Michael Lewis' (Moneyball, The Blind Side) non-fiction book of the same name, and written by director McKay and Charles Randolph, is the most effective piece of writing I've engaged with all year. It is profane, clever, maddening, and, at times, glorious. It shifts between narrators. It tackles its challenging, almost incomprehensible, subject matter with great ease, even going to such lengths as enlisting celebrities like Anthony Bourdain, Margot Robbie, and Selena Gomez, to face the camera and explain tough terms in perfectly clear detail. The actors themselves break from character and the fourth wall to give us astute asides about what the dialogue is all about, or even to make us aware that it didn't really happen this way. It is purely meta in the most delightful ways. 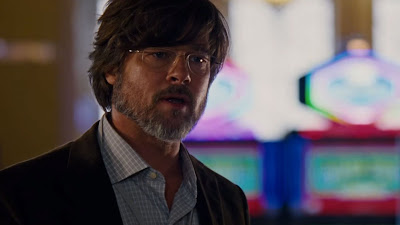 Likewise, McKay and his editor, Hank Corwin, throw everything they can at us. News footage and stills are intertwined with the action to put us perfectly back in late aughts. Title cards flash up names and terms and definitions. At 130 minutes, The Big Short plays at breakneck speed, and we never miss a beat. I literally wanted to high five this movie at times. I wanted to get out of my seat and shout "Hell Yeah!!" It moves, and moves the audience, in more exciting ways than any movie this year. It does all this without ever connecting the characters. Michael Burry never even meets Mark Baum and neither of them ever meet Charlie, Jamie, and Ben, yet their stories blend into one, as streams into a river, or as money into "the machine."

Christian Bale's performance is perfect, relying heavily on facial expression and mannerism. He is so intensely sure of himself and doesn't remotely fold when his main benefactors come calling him a nutcase, questioning him on how he seems to think he's so much smarter than Alan Greenspan.

The true heart of the story, though, lies in Mark Baum, the Steve Carell character. He is dealing with a tragedy, the death of a family member, and strikes firm at any and all injustice. Carell has an ability to transform that is undeniable. It is hard for a comedic persona we all know so well to blend into character. I totally forgot I was watching Steve Carell. He talks fast in a strong New York accent into his cell phone. He raises his voice and messes his hair. When he says he is sickened by his own business, he means it, and we feel it. His role in the film is also to delve into this at the lowest level. Consider a scene where he and his partners (Hamish Linklater, Rafe Spall, and Jeremy Strong) interview a couple of Miami frat boy mortgage brokers. This is where it gets really sad. These guys willingly sold shit home loans to immigrants and poor people in order to capitalize on the huge bonuses these sorts of loans afforded them. 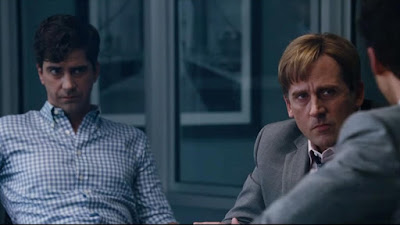 And, for the most part, all of this happened. Some of the characters are amalgams of real life people, but the facts of this film are actual facts. The Big Short does things that other films and media have tried. The Oscar-winning documentary Inside Job bored me to tears in telling this same story, even with Matt Damon as its narrator. In 2008, Chicago Public Radio's This American Life delivered an episode called "The Giant Pool of Money," which spawned a podcast called Planet Money. This movie matches and even surpasses what that did so well, which is to level out and humanize this catastrophe of greed.

We live in a country that continues to allow big banks to stay big, to gamble with not only their investors' money but also the money of the average taxpayer, like you and me. We just go about our business, it seems, and allow our bought-and-paid-for Tea Party Congress to sell us a lie. A lie that basically says everything is fine, while, under the table, they grab their seats with the money of huge business in their pockets, while the middle class gets poorer and poorer and then takes the blame for not "pulling themselves up by their bootstraps."

I left The Big Short fighting mad. I was also devastated at the atrocities our own government has allowed, and, in many cases, continues to allow. At the same time, I left happy, for I had seen a movie that made me happy and mad and sad, all at the same time. Can you think of a movie that has ever done that? Think about it and get back to me.