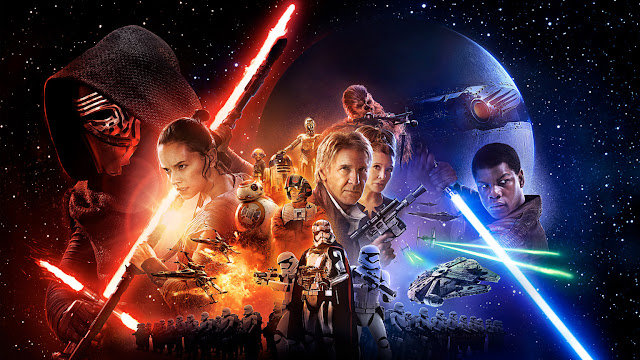 One weekend day back in 1997, my Dad took me to see Star Wars. George Lucas had just re-mastered, edited, and released his original film with updated special effects. Later, I got the original remastered trilogy box set on VHS. I watched Star Wars and The Empire Strikes Back. Then, I put on Return of the Jedi, finally, a few months later, and didn't even make it through.

Moral: I am not, nor have I ever been, a Star Wars fanboy.

I can honestly say, though, that now, the day after my screening of J.J. Abrams new installment, a continuation of the original trilogy, I'm closer than ever. I want more. 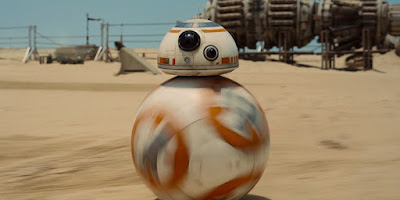 Set some 30 years after the events of The Return of the Jedi, it appears that the ways of The Force have been lost again. The Force Awakens opens with a Resistance (the new "Rebellion") fighter pilot named Poe Dameron (Oscar Isaac) and his droid BB-8 (the cute little orange and white one) coming into possession of a map on the desert world of Jakku, where we are introduced to Kylo Ren (Adam Driver), the new Darth Vader, as it were, with even more major anger issues; a storm trooper who comes to be known as Finn (John Boyega); and a scavenger girl named Rey (Daisy Ridley).

Through a series of supremely exciting chases and escapes, a group of unlikely heroes, the new (as mentioned) and even some old in Han Solo (Harrison Ford) and Chewbacca (Peter Mayhew) and the Millennium Falcon, is formed to protect BB-8 and his prized possession, a map that may very well lead to the missing (now mythical) Luke Skywalker, the last remaining Jedi, "our only hope." And that's all you get. (I will not spoil you as I was spoiled by some incredible jackass on a Facebook comment thread. Ugh. What sick individuals we have in this world.)

Now, I'll just talk about how happy I am to live in a world where movies exist and how movies like Star Wars: Episode VII - The Force Awakens are the reason we love movies. It is pure magic. It's a magic to be shared and remembered. 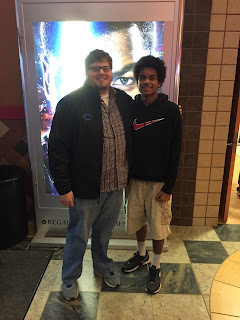 About a week ago now, I got to talking about going to see the new Star Wars with some of my 8th grade English students. One particular student asked me when I was going, as if he might want to try to see it with me, or catch me out. Happens from time to time. I just straight up said, "Well, let's just go, man." He already had my number from a field trip we went on, so I planned it and it was settled. My wife and I took one of my students to see it. When the movie was over, the young man asked me, "What did you think?" I slipped and cursed: "It was [expletive deleted] awesome!" I said. Oops. He just laughed. And agreed.

What's not to agree with? The Force Awakens is just so much fun. It drips and oozes iconic, nostalgic energy, even if you, like me, are not uber-experienced with all things Star Wars. Hell. I'd imagine this movie would be fun, even if you know nothing. It helps to know a little though. Part of the fun is in recognizing the callbacks and in-jokes and seeing familiar faces, familiar characters both reinvented and just as they were.

It all starts with J.J. Abrams, the man who brought us TV's Alias and Lost, who successfully rebooted Star Trek, made a lovely homage to 70s Spielberg in Super 8, and now takes Star Wars and perfects it. This movie looks incredible. It is absolutely visually flawless. George Lucas' original (we won't mention the CGI-cartoon prequels) is known for its state-of-the-art practical special effects. There is plenty of that here. And, even when the CGI comes into play, and there is plenty of that as well, it seems grounded and real. This is the realest looking Star Wars universe yet.

Then, there's the casting of two unknowns in the leading roles. John Boyega is perfect as the deserting Storm Trooper FN-2187 aka "Finn", so willing to fight for right. He is funny and also serious, easy to root for. Even easier to root for is the wide-eyed Daisy Ridley as Rey, whose story is quite similar to that of Luke Skywalker, both orphaned on a remote desert planet, both scavenging, trading to get by. (The mirroring aspect of this film has been criticized by a few. I adore it.) Rey is just so gung-ho and sincere, also funny. She is a true action hero. I love her.

John Williams' finest, most iconic work is here again, slightly altered but all too familiar. There is a scene, my favorite cinematic moment from this film, near the end, that is all about Williams' score, working so well with J.J.'s camera, guided by Director of Photography Dan Mindel, graced by our hero.

This is a movie filled with brilliant moments that make our heart race, cover us with goosebumps, rattle us with anticipation, build and build and build to a finale that is more satisfying than anything I've seen this year, even if it might be obvious.

If you told me last January that a Pixar movie about the emotions of an animated 11-year-old girl and a Star Wars sequel would be close to the top of my favorite films of the year, I would've laughed in your face.