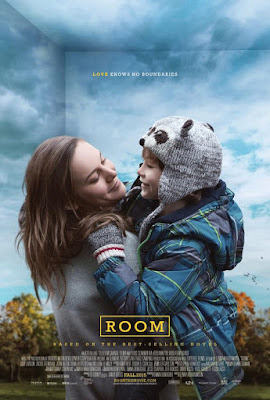 When the Walls Come Down

There's a feeling that came over me at one point during director Lenny Abrahamson's Room that I don't often experience. I'm sure others felt it too. It is a feeling brought on by an acuteness of suspense, most often reserved for the loftiest of thrillers. Take the final moments of last year's Indie darling, the revenge thriller Blue Ruin, for example. But here, in a movie that is so tender, so loving of its characters, I can't imagine how it was executed so perfectly.

That's not to say that this film is perfect. In fact, by the end, I struggled to decide how I might rank this film. I felt it left things out that I wanted to know. It introduces an important character and lets said character just disappear. Then, I had to be reminded of something:  this film is based on a novel, a novel told from the perspective of a 5-year-old boy. It's hard to admit (since I don't know what to make of needing this knowledge) but having it made this film great for me. Without it, I wouldn't be so sure. 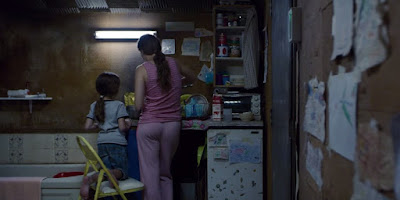 Room stars Jacob Tremblay as Jack, the 5-year-old boy in question. As the film opens, Jack's daily routine is presented, a routine of "small things" in a "small place" alongside his Ma (the most amazing Brie Larson yet). It's his birthday, and he and Ma will make a birthday cake. The "room" in question is a shed made into a tiny apartment of sorts, locked by a digital keypad, controlled by a man only known as Old Nick (Sean Bridgers). Old Nick, come to find out, has held Ma (as we know her for the first two acts) captive for seven years. I'll leave it to you as to his motives.

A mere child herself (around 17 or 18, by my estimation) at the time of her kidnapping, Ma creates the whole world inside "Room," a way for Jack to understand his surroundings without questioning what might be outside. Everything in Room has a Name. Jack loves it because he knows it and vice versa. For Ma, the walls are starting to come down, along with a developing Jack's questions. A plan is hatched, an escape is made, a reunion with the world and her family, including Grandma (Joan Allen) and Grandpa (William H. Macy), is thrust upon young Jack and a whole new chapter begins... 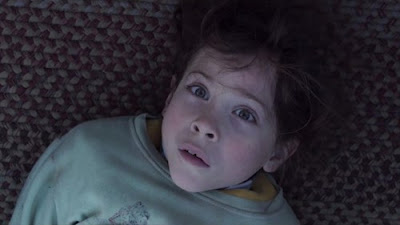 This movie works on the element of surprise, throughout, more so than just about any I've seen this year. That feeling I was talking about. It extends from an obvious labor of love between a novelist adapting her own book in Emma Donoghue and a filmmaker in Lenny Abrahamson, who, with only a small oddball comedy called Frank (unseen by me) under his belt, is proving to be one to look forward to. It works on our hearts. We love these characters, and we love their love. We know and understand their bond. This and only this is what makes the daring, the suspenseful situations so perfect. The fact that Abrahamson and Donoghue take their time in creating the world of Room so fully and clearly is everything. And the tension they are able to achieve without over-stepping into outright disturbing stems from (and works with) that as well.

Brie Larson's work here is the performance of the year, as far as I've seen. (Plenty more, I know.) But she will be on the ballot come Oscar time. She has a natural look that is knowing, intriguing. She plays a range of emotion here that few young actors ever get a chance at. In a recent interview for CBS Sunday Morning, she showed her humility and humanity, when asked how she feels about being the "it girl" of the moment. Many have rooted for her in recent years, especially in light of her giving one of the best, totally unnoticed, performances of the year a few years ago in the Indie drama, Short Term 12. She gets a second chance with this role

Young Jacob Tremblay, though, truly carries this film. He is the most confident child actor I've seen in years, hitting every emotion required of him, reading a voiceover narration (sparingly) that will tug on your heartstrings like nothing I've seen (or heard) this year. It is so exciting to see.

When I left the theater, I was supremely satisfied, yet the final act of Room isn't quite as emotionally effective as the first two. As I said before, I found myself questioning a couple of threads this film started in the second act that just didn't go anywhere. Like, why hire William H. Macy for what amounts to a half-day's work at best? I think it's the grown man in me, my demographic, that blinded me to this fact of which my wife most kindly reminded me: "But the book is from the kid's perspective, and so is the movie."

How right she was! And how good that is!