Thursday! Less than week and half until I'm off for Winter Break!

I often joke with some of my colleagues about the long breaks we get every winter, what with the two week break that often extends, intermittently, into January and February with snow and ice. Cabin Fever is real, and we often liken it Stanley Kubrick's locked up wintry hotel in The Shining. It can get crazy. It looks something like this: 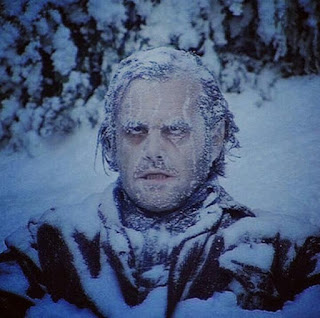 So, I guess you know where I'm going with one of my picks this week as part of Wandering through the Shelves' Thursday Movie Picks. Sorry. It has to be done. I mean...Movies Set in a Hotel? There's only so many places my brain goes. 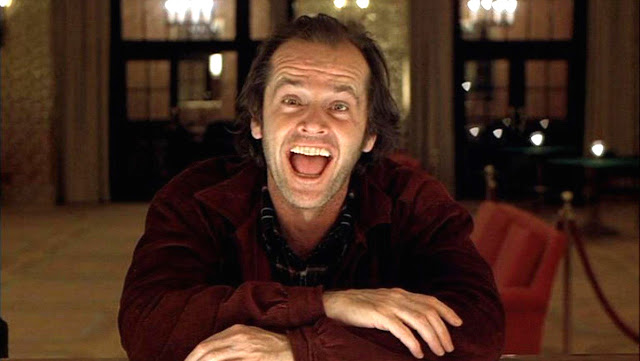 The only Stanley Kubrick film (of the ones I've seen) that I can actually say I love, The Shining is quite simply one of the most terrifying mind fucks of a film of my movie life. I needn't say much about the plot. Jack Nicholson is badass and classic crazy as the Overlook Hotel's newest off-season caretaker. Shelley Duvall, as his wife, is scared out of her mind, quite literally, if lore holds true. And that kid...equal parts creepy, knowing, and lovable. Plus, Scatman Crothers, and that terrifying music. Good God! 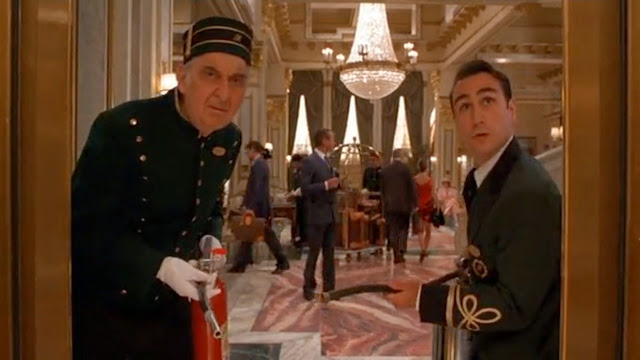 As 90s romantic comedies go, there are few better for me than For Love or Money. Michael J. Fox charms it up as Doug Ireland, the smooth-talking concierge at a fictional upscale NYC hotel. He is also a lonely dreamer, planning to build a new hotel of his own. He schmoozes and glad hands and always knows what to say, whether its with the midwestern schmuck (Michael Tucker) on a last-ditch second Honeymoon with his wife (Debra Monk) or the mobster with a heart of gold (Dan Hedaya) or the slimy, rich businessman (Anthony Higgins) he plans to hit up for seed money. The problem is his potential financier is dating the girl of his dreams (Gabrielle Anwar). This is a fun romantic comedy. I miss Michael J. Fox. 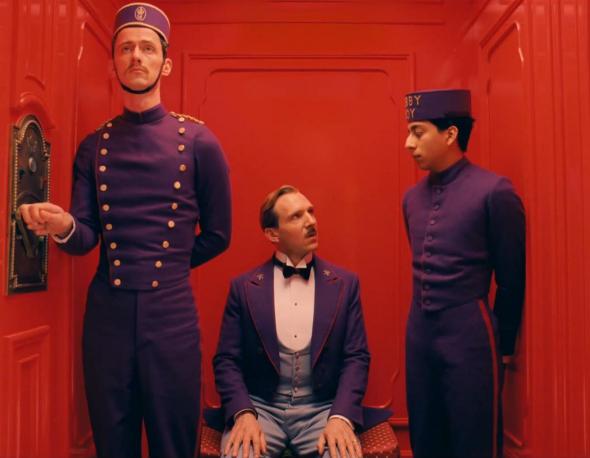 Ralph Fiennes was robbed of an Oscar nomination last year. In a great year for leading men, it was Fiennes as M. Gustav H., the concierge of the Grand Budapest in the time between the great wars, that took the prize for me. This is an astounding work from my favorite filmmaker with large doses of hilarity and wit, touches of pathos, and a production design unmatched in recent years.

Side Note: I got into a conversation with a former student of mine, an 11th grade budding film buff (I taught him when he was in 7th grade), who said this was the only Wes Anderson film he'd seen. I immediately offered my Criterion Blu-Rays. I handed them off today. It warms my heart to be able to share Wes Anderson's work with a young movie guy. He texted to me last night to say he watched Rushmore (the one nearest and dearest to me as a teenager...and still today) and that he loved it.

Email ThisBlogThis!Share to TwitterShare to FacebookShare to Pinterest
Labels: For Love or Money, On a Thursday, The Grand Budapest Hotel, The Shining, Thursday Movie Picks