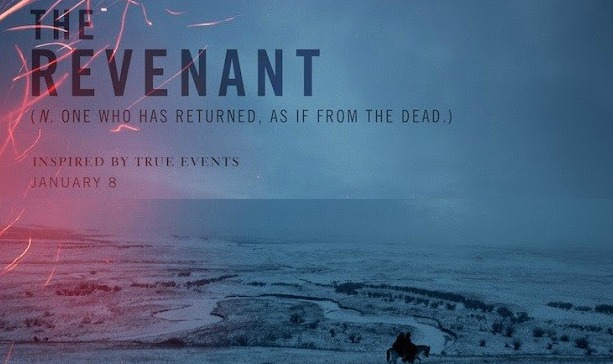 The Revenant is a painful, punishing film heightened by an obvious level of dedication from its cast and crew rarely seen in modern cinema. It is also graced by the visual touch of Emmanuel "Chivo" Lubezki, the finest cinematographer in recent movie history. It is, for director Alejandro González Iñárritu, a work on the level of the best epics of the wilderness, reminiscent of the type of maniacal filmmaking achieved by the likes of Werner Herzog with Aguirre, The Wrath of God and Fitzcarraldo or Francis Ford Coppola with Apocalypse Now.


Like those films of an era past, it was marred by difficulties. It went over schedule, over budget, and lore of the making of the film, so far, has its director in battles with crew members...fights, shouting matches, mutinies, all the trappings of a lasting epic.

And true to that "lasting epic" bit as well, this film is astoundingly beautiful as much as it is physically torturous to its cast and crew and emotionally to its audience. I have truly never had a theater experience like it. Alas, I am too young for those others, not even yet born.

Leonardo DiCaprio stars as frontier fur trapper Hugh Glass, circa the 1820s. As part of a team of trappers of The Rocky Mountain Fur Trading Company, Glass takes on the critical role of scout. We learn early on and throughout the film, in flashbacks and dream sequences, of Glass' relationship to the Pawnee, a relationship that provided the love of a woman, halted by one of the many common tragedies of life at the time, and a son, a part-Pawnee boy called Hawk (Forrest Goodluck).

As the film opens, so does Lubezki's camera and Iñárritu's grit. A group of "Ree" indians attacks the camp of Glass' team, led by a man only referred to as Captain (Domhnall Gleeson), in a move to steal the team's many bales of fur. The "Ree" have a raid-and-trade deal with the French, and this particular group is on a mission to find the chief's missing daughter. In addition to Glass and his son, the Captain also leads a group of hardened men, including most notably, the young Bridger (Will Poulter) and the angry, gruff Fitzgerald (Tom Hardy). Fitzgerald resents Glass' esteem in the group, cursing him and his "half-breed son." For reasons I won't reveal, Fitzgerald has call for his prejudices, though, are those ever good?

The opening sequence with the "Ree" attack is simply the first of many of the most astounding camera work I've ever seen, even surpassing Lubezki's work with Terrence Malick on The New World and The Tree of Life. It captures not only the up-close gore of this type of combat, mostly arrows and hatches and musket fire, but also the expansiveness of the frontier wilderness. Over its 156 minute runtime, there are nearly equal parts intriguing violence, natural punishment and splendor. Consider an unbroken shot that starts in a stream, wanders to a grisly scene on a hillside, then up into the trees, and back down again to seamlessly match up to our hero's rifle. These sorts of camera movements are rare. This movie is made of ONLY them.

Few movies are able to capture nature the way this one does. Set in a harshly cold Northern winter, the film actually FEELS cold. Actors are in and out of freezing streams and rivers. They trek knee-deep in snow. They grab the cold, hard earth with bleeding knuckles. Black fingernails. Frostbit ears and lips. It's even hard to tell what is a visual effect and what is actually happening. Did the make-up department do this, or did this harsh Canada locations do it? Is that bear real? No way, but it sure looks like it. It's noted that Iñárritu and Lubezki's goal was to use natural light only. That shows, and it is immaculate. But did they wait around for an avalanche? Or are they just lucky? I can't express the joy of seeing something like this on a massive movie screen with an audience that was just in stone cold silence the entire time, save a few heavy gasps for breath.

At the center of all this is the work of two of the great actors working today, Leonardo DiCaprio and Tom Hardy. DiCaprio's work here is more deserving of an award than any other this year, whether you care about that sort of thing or not. The dude deserves a fucking medal, if you ask me. In the face of extreme conditions, he exudes not only pain but real emotion, survival mode powered by love and desire. It is an intense performance and much without words. It is a performance of eyes and teeth and hands, all caked with spit and blood and snow and dirt.

Tom Hardy's work is menacing. His Fitzgerald is a villain of the most classic nature. He is a conniving man, on the lookout for only himself, his money, his goal of getting out of this god-forsaken Northern hell for the greener pastures of Texas. But at what cost? The decisions he makes make sense given the experience, but his evil is always underneath. It is truly an inspired piece of acting, from the accent (a British man doing spot-on Southern dirty) to the physicality in the way he messes with his balding scalp and handles his precious bales of fur.

The Revenant is an experience I just don't want to continue to spoil. As a narrative, it is simple and is mostly already known: a fur trapper is left for dead by his crew and seeks revenge on those who left him behind. That is it. It's not the end, it's the journey, the means, the balls of the producers and crew members and the director and its stars that makes this such a special film.

I have said so much, yet no words can express what The Revenant does. I will only say that it is a masterpiece. Not only that, it is the kind of masterpiece that just doesn't get made anymore. In its vision alone, it deserves a level of respect for which most movies can only wish.

Email ThisBlogThis!Share to TwitterShare to FacebookShare to Pinterest
Labels: 2016 in Film, 2016 Movies, Movie Reviews, The Revenant