I must have been at my most impressionable, as far as movies are concerned, during my junior and senior years in high school. I was not yet to a point of branching out into foreign language films. I saw movies based on who was in it or who directed it (in some cases). But so many of the movies that came out around that time have really stuck with me, even some bad ones.

I had to do a Google for this post. I needed to browse a list, looking for foreign language films remade for American audiences. It didn't take long to have my picks, and, as it turns out, all of my picks were released during 2001-2002, when I was a junior, then senior, in high school. I, to this day, have not seen the original foreign titles on which these films are based.

So, it's Thursday, a day for sharing some of my favorites as part of Wandering through the Shelves' Thursday Movie Picks. This week, of course, we have Movies Adapted from Movies of a Different Language. 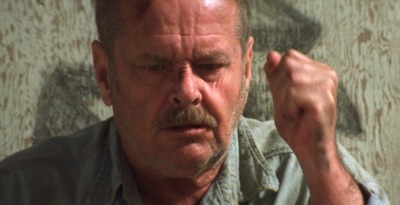 Jack Nicholson stars, in one of his more brooding turns, as Jerry Black, an aging police detective, who, on the day of his retirement party, finds himself at the scene of a crime. Someone has murdered a young girl. Det. Black pledges to find the killer, moving to a remote fishing village where he buys an old gas station as a means to track the killer, still at-large. Meanwhile, he meets Lori, a single mother played by Robin Wright, who along with her young daughter, Chrissy, becomes a larger part of Jerry's life than he anticipates. This is a dark film, directed with perfect command by Sean Penn, and, like all of Penn's films as a director, it is full of small parts played by big-time actors. The cast is killer. Here. IMDb it. I haven't seen it since I went to the theater with my Dad that winter day in 2001. It has never left me.

I saw this one with a group of friends as a senior in high school, though I didn't fully grasp until I re-watched it a few years later. It quickly became one of my favorite mind-benders of all-time. Tom Cruise stars as David Aames, the wealthy heir to a publishing dynasty, who spends most of his time partying and chasing women, including the sexy Julie Gianni (Cameron Diaz). He wants more though. He feels alone. Until he meets and falls for Sofia (Penélope Cruz), spurning the smitten Julie, who takes David on a ride that changes the course of this life and the next. The end of this film is one of the great wonders of the movies, as far as I'm concerned. It stands as Cameron Crowe's most mature film as a director and features one of the finest needle drop soundtracks ever put on film.

Running from an internal affairs investigation, famed homicide detective Will Dormer (Al Pacino) and his partner Hap (Martin Donovan) are called to aid in a murder investigation in the small logging town of Nightmute, Alaska, which lies just above the Arctic Circle, where the sun never sets at certain times in the year. After Hap is mistakenly killed in the line of duty, Dormer faces the biggest challenge of his career in the wake of the internal affairs business back home, the guilt of his partner's death, and a case that reveals a killer in Walter Finch (Robin Williams), who becomes harder and harder to catch the longer and longer Dormer goes without sleep. The setting is the best part of this film, creating a new take on the noir genre that is equal parts intriguing and entertaining.

Email ThisBlogThis!Share to TwitterShare to FacebookShare to Pinterest
Labels: Insomnia, On a Thursday, The Pledge, Thursday Movie Picks, Vanilla Sky