Thursday Movie Picks: Movies Narrated by Narrators That Do Not Appear on Screen

Now, this is a good one. It's so good, in fact, that I literally overloaded, shut down, and ultimately went with the three of the first four that came to me (and the fourth is here as a bonus). I love so many movies that use this technique, but I just couldn't find them. This is a trio of movies taken to greatness by the voice of an unseen omniscient narrator, three films that hinge on it for humor, for nostalgia, for exposition, for how imagined histories shape the best narratives. Plus, that bonus...

So, it's Thursday, one of my favorite of all the days, and it's time again for Wandering through the Shelves' Thursday Movie Picks. This week, of course, it's Movies Narrated by Narrators That Do Not Appear On Screen.


Me, Myself & Irene
Dir. Bobby Farrelly and Peter Farrelly, 2000 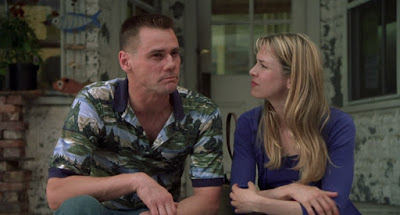 Narrated by Rex Allen, Jr., the Farrelly Brothers' Me, Myself & Irene has stood out as one of their best. I realize many may not feel that way, but this was my jam in college. My roommate and I watched this movie all the time. Jim Carrey has some great zingers, and it's a great physical role for him, finding him transforming between the mild-mannered Rhode Island State Trooper, Charlie Baileygates, and his alter-ego, the angry, repulsive Hank. That's all well and good, but it's the lazy, Southern-tinged narration by the son of Rex Allen (narrator of quite a few '50s Westerns and the animated Charlotte's Web) that really works. The apple did not fall far from the tree, and the familiarity of it is what gets me.

Narrated by Will Lyman, Little Children is easily one of the best films of 2006. It's a literary tale about intelligent, but bored, suburbanites behaving like, well,... The reading of author Tom Perotta's simple, darkly humorous prose is nothing short of perfection. It so aptly underlines the immediate emotions of each character. Put simply, it is like literally watching a novel. And Lyman's deep, non-regional American accent is an incredible touch. When will Todd Field make another film already? With this and In the Bedroom, he is two-for-two in a big time way.


The Assassination of Jesse James by the Coward Robert Ford
Dir. Andrew Dominik, 2007

Narrated by Hugh Ross, Andrew Dominik's undeniable masterpiece was instantly realized as soon as Ross' voice is heard, in its sort of soft gruffness, reading Ron Hansen's absolutely masterful prose adapted by director Dominik. There are some lines in this thing that simply amaze me, illustrating the pasts of the titular characters, the pasts of those who crossed their paths, a past that is also future even if past, in some cases. One example: "He also had a condition known as 'granulated eyelids,' and it caused him to blink more than usual as if he found creation slightly more than he could accept. Rooms seemed hotter when he was in them. Rains fell straighter. Clocks slowed. Sounds were amplified." That sort of thing mixed with Nick Cave and Warren Ellis' genius score and Roger Deakins' best work ever...period... literally makes this one of the most perfect films ever made. I praise it too much, probably, but I just can't help it.


My Favorite Ever - A Bonus Pick 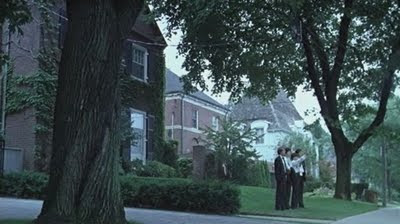 For this reason, Giovanni Ribisi narrates, "It didn't matter in the end how old they had been, or that they were girls, but only that we had loved them, and that they hadn't heard us calling, still do not hear us calling them out of those rooms, where they went to be alone for all time, and where we will never find the pieces to put them back together."

Thanks Jeffrey Eugenides for writing such a lovingly bleak portrait of teenage desire. Thanks Sophia Coppola for doing him such beautiful justice.

Email ThisBlogThis!Share to TwitterShare to FacebookShare to Pinterest
Labels: Little Children, Me Myself & Irene, On a Thursday, The Assassination of Jesse James by the Coward Robert Ford, The Virgin Suicides, Thursday Movie Picks