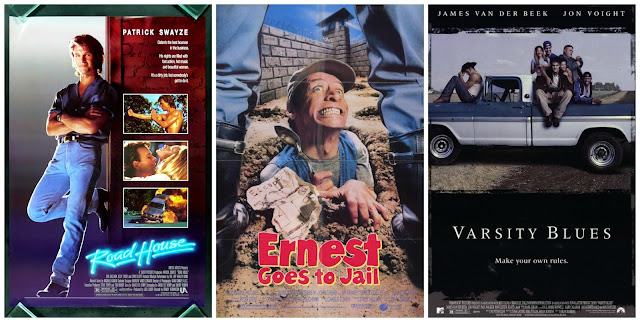 I am a failure. I have failed in that I have seen so few of the Classics. I mean that in two ways. While I'm lacking in many of cinema's masterpieces (aren't we all?), I am even further (by a country mile) lacking in the worst of the worst, the Troll 2s of the world, if you will. I even Googled on this one to get a list, realizing I'd never seen most of these movies because, well, they sound....bad.

My search led me to one of the more fascinating, hilarious things I've ever encountered. All these websites, every single damn one of them, champion a 2003 film called The Room as the "best worst movie of all-time," "the Citizen Kane of bad movies," and so on and so forth. As I write this, I am coming off of a hour-long bender fueled by YouTube clips and Google searches. I want to read the book about its making. I want to see the James Franco film of the book (The Disaster Artist) about this film. Have any of you seen this thing? Please tell me you have and that I should watch it... If you haven't, please do what I just did. I'm telling you...fascinating.

Excuse the tangent...it's Thursday, our day, and it's time of another entry into Wandering through the Shelves' Thursday Movie Picks. This week it's bad movies. The kind you tell people, "It's So-Bad-It's-Good."

Few movies are as compulsively watchable as Road House, the 1989 Patrick Swayze vehicle about a night club "cooler" named Dalton, also a Ph.D. in Philosophy and a firm follower of the martial arts. He drinks his coffee black, smokes Marlboros, woos the local ER doctor (Kelly Lynch) with his sage intellect, and carries the mantra..."Be nice." The absurdity of this film already evident, enter Ben Gazzara as a local millionaire extortionist named Brad Wesley hell bent on keeping the scum thriving at the Double Deuce, the "road house" in question. Shirts come off...a lot, always Swayze's, organs are actually ripped from bodies, yet somehow this movie never once laughs at itself. In fact, it takes itself seriously and is honestly a slickly well-made piece of late-80s cant-turn-away greatness. FACT. 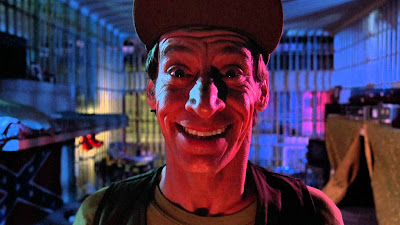 There's a scene in Ernest Goes to Jail that will forever go down as one of the greatest discussion pieces in the history of my immediate family. Jim Varney, fully embodying the lovable fourth wall-breaking goofball, Ernest P. Worrell, goes through a series of at least a dozen riffs on Cagney's misquoted "You dirty rat" line. He does it in multiple characters, personalities, filters it through other classic movie lines, even throws in some Bogart a la Casablanca. The rest of the movie is absolute unforgettable garbage, but that scene, that one scene stands as a masterpiece of comedy in my mind. It makes this movie one of the greatest movies I've ever seen.

*Note: Ernest Goes to Camp and Ernest Scared Stupid are actually not bad movies, in my opinion. Alas, I was a child then, too. 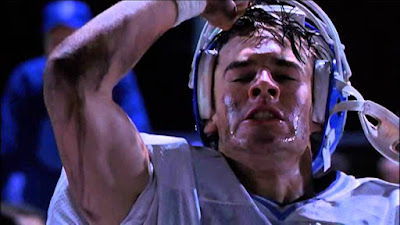 When Varsity Blues came out, I thought it was the shit. I was 14. A freshmen in high school. I loved football and cruisin' in pickup trucks and hot girls (I, myself, could never bag) and the WB television program Dawson's Creek (an odd mix, I know...). And though I loved Katie Holmes way more, I also had a bit of thing for James Van Der Beek (in a he-plays-an-unusually-attractive-kid-on-TV-who-is-also-a-dork-who-loves-Spielberg-movies sort-of way). Back to the motion picture at hand...A huge group of us met at the movies the night it opened. MTV had been shoving this thing in my face for weeks, the Foo Fighters' "My Hero" and AC/DC's "Thunderstruck" going along with it. Here is a film that really has the best intentions and is honestly pretty well made, but it is also a film that features a young actress (Ali Larter) in a "whipped cream bikini," shifting her choice of boy with the QB1 position, a ride to college. Also, a film that has the Sex Ed teacher as a pole-dancing stripper at an establishment that basically follows no laws. In which a high school football coach (Jon Voight) willingly shoots up Paul Walker with steroids and pain killers, so he can get his 23rd district championship. I took all of this as cold hard fact. Then, a few years later, I saw Friday Night Lights. I had finally come of age. The End.