Baseball and a Movie: A 30th Anniversary Screening of Ferris Bueller's Day Off

There is a scene in the 80s teen comedy classic Ferris Bueller's Day Off in which the title character and his two partners-in-crime go to Wrigley Field for a Cubs game in which they are playing the Atlanta Braves. They talk about how they should be in gym class but instead simply enjoy our nation's original pastime.

This is Turner Field: 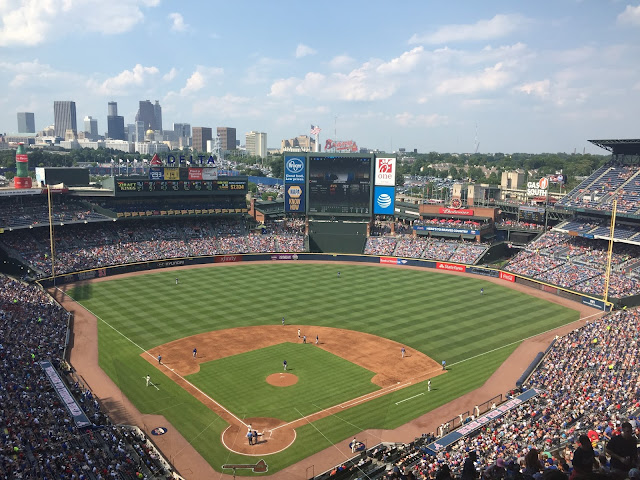 Next year, it will be empty for good as the Braves move into the suburbs and the brand new Suntrust Park.

But, there is plenty of love there in the Final Season. This is what happened there:

A 4:10 first pitch, the Cubs (the best team in baseball) took an early lead against the home Braves (the worst team in baseball) and never let up the whole game. Four different Cubs hit home runs to a final score of 8-2. There were more Cubs fans than Braves fans there.

After the game, our ticket afforded us a free bottomless bucket of popcorn, a throwback to 1986 cap, and a screening of the movie in question. Huge screen, huge sound, nothing but laughs and good times. It was a good day for a day off. 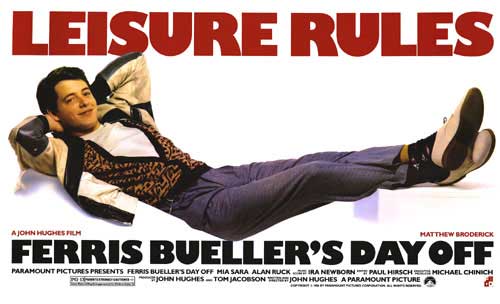 The most striking thing about my revisits of John Hughes' classic tale of teens skipping school is how with each viewing I seem to notice more visual style than in any of Hughes' other films, including the teen angst masterpiece The Breakfast Club and the original gold standard of 80s teen comedy Sixteen Candles.

Ferris Bueller (Matthew Broderick) knows he's in a movie, breaking the fourth wall to tell the audience directly what he's doing and why and what his motives are. The major motive involves bringing his shy, hypochondriac best friend, Cameron (Alan Ruck), out of his shell, with the aid of his beautiful girlfriend, Sloane (Mia Sara). He is smooth, charismatic, everyone loves him, except Ed Rooney, Dean of Students (Jeffery Jones) and his sister, Jeanie (Jennifer Grey), of course. He knows all the tricks to fake sick. He should. He's been at it for 12+ school years by now. His bedroom is engineered and his phone messages timed to the point where it's easy to see why high school is so dull for him. His ruse is airtight, the type only a piece of meta teen comedy can offer.

Hughes seriously crafted pure movie, a love letter to youth and the City of Chicago, an adventure into the minds of teenagers, bored with school and teachers and parents. The day off is one last blast for a high school senior, one last chance to make everyone's day.

Working alongside the brilliant director of photography and frequent collaborator Tak Fujimoto (Badlands, The Silence of the Lambs), Hughes creates lasting images in each of the scenes previously mentioned, images perfectly blended together by editor Paul Hirsch. And, as humorously adventurous this movie is, it is also about timeless issues of teenagers and their rebellions (or lack thereof) and how important those things can be. Maybe we shouldn't destroy our dad's priceless car...but we should at least take it for a spin.

And the car may very well be the most important element of the adventure. It is what we latch onto, what inspires our empathy for Cameron, what allows the adventure to even be possible. It's introduction is the stuff of 80s iconicism. Perfectly shot and edited to both excite us with possibility and cripple us with anxiety. The excited Ferris is who we wish we were. We are Cameron and rightly anxious. But we just can't help it. This is why we're friends with Ferris.

And the view from the top reminds us of how small we are and how big the world is and how the city is fun now but will soon mean work. Ferris' dad is down there somewhere. 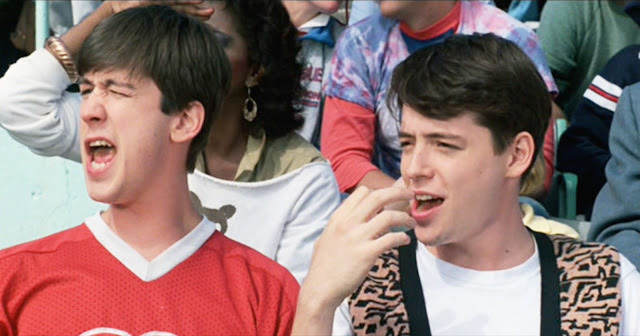 And the baseball game.  The game of American youth. The one we see grown men play, grown men who get to be kids for a living, a good one.

And the art museum where we practice being adults, pretending to understand something about ourselves...

...when we really just want to be kids on a field trip...

....and impress our best friend and our best girl and be the star of the show...one last time.

And where we learn that an experience comes wisdom, the wisdom to know that we should enjoy life for and with the people who surround us, not for material things that only weigh us down. Like a priceless car that never sees the road.

To wrap up, I suppose it's bittersweet that I see a movie that has obviously stood the test of time in a totally unexpected location, one that won't stand the same test. But what a cool thing to see a movie at a ball park. I go to baseball games, and I go to movies. I never thought I'd do both on the same day in the same place, one right after the other.