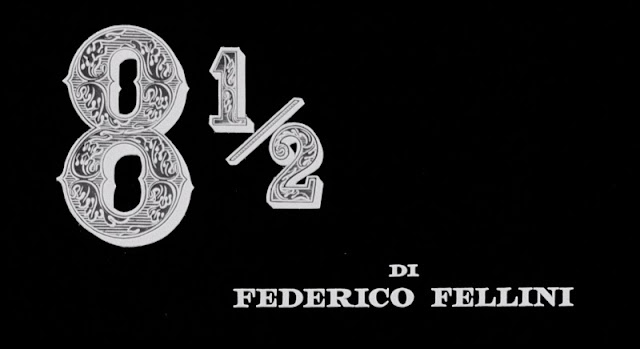 "...But we intellectuals, and I say we because I consider you such, must remain lucid to the bitter end. This life is so full of confusion already, that there's no need to add chaos to chaos. Losing money is part of a producer's job. I congratulate you. You had no choice. And he got what he deserved for having joined such a frivolous venture so lightheartedly. Believe me, no need for remorse. Destroying is better than creating when we're not creating those few, truly necessary things..."

So says Carini, the film critic, to Guido, the hero of this story, a film director at the end of his rope (literally) in Federico Fellini's eighth-and-a-half film, 8 1/2. A film that has eluded me for years and multiple attempts (I usually fall asleep within 20 minutes.) until now. I have finally watched it all the way to the end.

The scene at the end that contains this monologue from the critic, a character who pops up randomly, just as the majority of the characters do in this film, is talking about chaos. The pressure of, in this case, making a film, a venture that seems to pull its makers into utter turmoil just as any art would once the artist's art has found praise and the artist himself success. So, it certainly makes sense that Fellini's masterpiece should be chaotic. But the question for me, as someone who has struggled with this film, is Do I want to watch something so obnoxious enough times to "get it"? 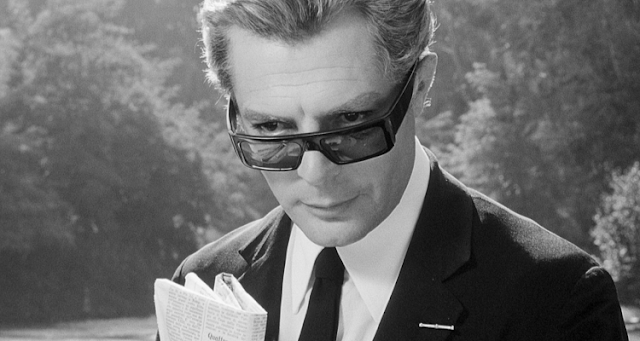 To explain... It is well-known that 8 1/2 is one of those movies that, due to its unusual structure and lack of tells in shifting between fantasy and reality, requires at least two or three viewings to fully grasp, thus becoming intimidating and/or frustrating. And this is true. My first full time through it is enough for me to know what I like and don't like about it, but it is not enough for me to decide whether I really love it or not. I'm leaning towards just not trying again...for one simple reason. It's...obnoxious.

In case you don't know, it is an incredibly simple movie on a basic plot level. A successful, really handsome Italian filmmaker (nice try Fellini!) named Guido (Marcello Mastroianni) is trying to take a break from making decisions about his new film, an expensive sci-fi sort of picture (very vaguely developed), at a spa outside of the city. There, he can't find the alone time he needs (and seems to not really want) and thus ends up having to juggle his wife, his mistress, this beautiful woman he keeps imagining (?), actresses, musicians, his producers, his partners, critics, press, on and on, while introspectively pondering, fantasizing, and remembering key moments from his childhood.


Having seen Woody Allen films in large quantities, I easily make connections with this narrative. And it's no secret that Allen, whom I love very much as a filmmaker for the most part, is a Fellini fanatic. He made plenty of movies that deal with the very same themes using similarly unusual narrative structures, including an almost blatant 8 1/2 ripoff in his 1980 bomb Stardust Memories. I like the Fellini better, but then I think about something like Annie Hall, which does many of the same things with narrative that 8 1/2 does. It's a far better film. It is because it is more relatable on a comedic level, and it features a character that isn't so rich and good-looking. I have trouble feeling for Guido, trouble buying, in Mastroianni's performance, that he is actually upset about anything. Poor him. He has half a dozen of the finest women of Italy in 1963 at his disposal and all the money you could ask for and gets to work as a film director and it's all poor Guido. Mastroianni plays him in such an aloof manner that it is impossible to connect to him. I don't identify.

And maybe I just don't get it because of the language barrier. It's hard to watch movies in a foreign language, especially ones that talk so much and so loudly. And why is it so jarring when people speak in Fellini's films? Simple. He (and most Italian filmmakers of his day) didn't shoot his movies with sound but went back and dubbed in later. This is just annoying to me. I get that his goal was to get the best possible visuals out of the camera, honing in on the intricacies and movements of each shot, but at what cost? The dialogue is too loud, unnatural, and it creates a type of artifice I don't really like. It makes the movie chaotic, but this time not on purpose. The sound dubbing is just the way Fellini thought he should make movies. 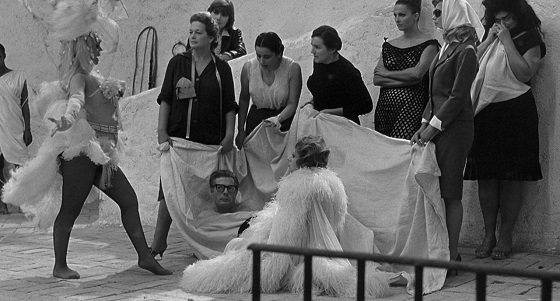 I don't mind to praise this film visually. It's a bona fide masterpiece as far as that's concerned. To look at 8 1/2 on Criterion Collection Blu-Ray is to see a picture without flaw. Not one. Not a skip or a jump but smooth, gliding camera work in every single shot, as if it was shot with the finest only yesterday. It doesn't feel 50 years old. And it isn't all surface...it's clever. For instance, the only scenes I will focus on in this reaction are two that match and that are probably considered the best the film has to offer apart from the very end. The flashback sequence in which Guido is transported to his childhood, bathed in wine, wrapped in a towel by the women who raised him is just heavenly. It is immaculately well-filmed and ever so true to the ways of memory. Then, its counterpart, a fantasy sequence in which all the current women in his life bathe him then turn on him, is equally fascinating and just brilliantly put together. It's welcomed chaos.

But not everything worked that well for me. For a movie that is really so lively, it's just hard for me to focus on it. I had to watch it in three sittings of about 45 minutes each. It's exhausting. During the second sitting, I actually fell asleep. And I wasn't even tired. I had slept nine full hours the night before and done pretty much nothing all day. I don't know. Filmmakers love this film. I get it. I even get the delight of it all, especially visually. But is this a film (while knowing I won't ever make a film myself) that I feel I need to watch more times, a film to study? Not really. Though, when I look at stills or screencaps from 8 1/2, I instantly want to go back to it. I don't know. Maybe I'll see it again one day, maybe not, maybe soon, maybe some curiosity will strike me, or someone who comments on this post will convince me. Maybe then, I will go back and will fully make sense of it all and write a new post in which...I don't know...I get it. 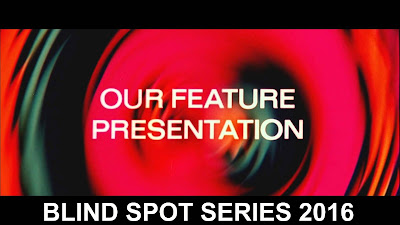