Over and over throughout last year, I kept hearing about this movie coming out, a movie which lay in wait for whatever reason for more than a year, Midnight Special, the new film from Jeff Nichols, a filmmaker I'd been hearing about for years but kept missing.
In large part, that is due to Nichols' films generally not being well marketed or distributed. With each subsequent film (and miss), I found that as soon as I heard of its brilliance, it was nowhere to be found. And I live in the Southeast, decidedly Nichols territory, and I happen to live in the only Tennessee city with an 8-screen arthouse theater. I don't even recall Take Shelter or Mud playing at all.

But they were out there. I just needed to find them. And what I have found in the works of Jeff Nichols are films, for the most part, seemingly made for me. 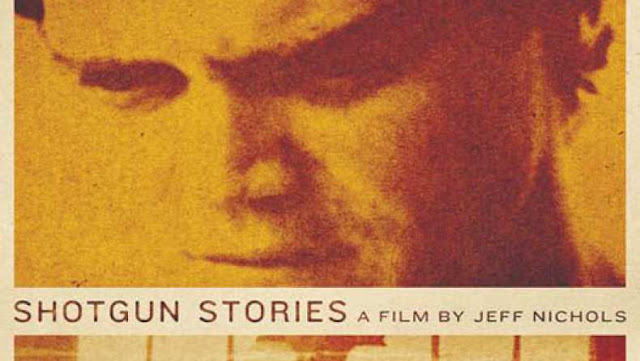 His feature debut, Shotgun Stories is borne out of the shared remembrance of the histories, legend, and lore of the Southeast. Like a fine Americana song of feuding families, here is a film that builds dread upon fear, amps up internal struggle, and leaves the violence to our own remembrance, as we've read this story before and already know what it looks like.

Alienation, isolation, desperation. These are the concepts found here, most notably. A man named Son (Michael Shannon) is one of three brothers, three protagonists, fueling the narrative. His brothers are Kid and Boy. Many years before, their drunken father left their hateful mother, gave up the booze and the abuse and started a new family, one in which he gave his four new sons actual names. That, in and of itself, is enough for Son to turn up at the funeral offering truth about the father he never had to the half-brothers that did and he so disdains.

A feud erupts internally then from provocation, without violence then with, though little is actually seen, as I said, and that is the genius of this film and would become what Nichols does so well. He isn't interested in showing us everything. He wants us to feel what his characters feel. Alienation, isolation, desperation. The feelings of a life in a poor, small Arkansas town, any small Southern town really. It's all in the details. The small rundown house in which Son lives and where he allows his younger brother Kid to sleep in a tent in the back yard. Boy's conversion van, parked by the river, never enough power to keep the A/C running. These men have had it hard and so do we.

Then the half-brothers, their nice Dodge trucks and farm equipment. Houses with gardens, men with futures, seeking revenge over a few deserved words. For Son, Kid, and Boy, all there can be is retaliation, for the the other brothers simply don't grasp their plight.

With a tiny budget, Jeff Nichols made a beautiful Southern tragedy in his first outing. One relying on the inner turmoil of its characters, which itself creates an irony what with the sensation of bloodshed looming and achieved. It's not what we see. It's what we see instead that hooks and haunts us. It's the before and after that hurts the most. 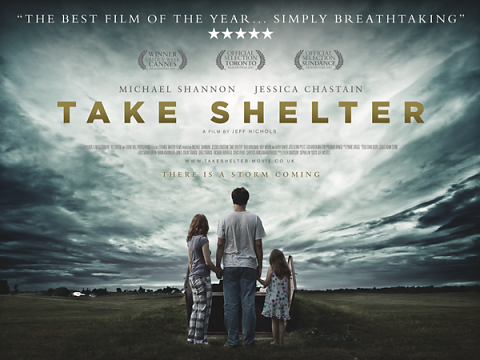 This time, in another small town in rural Ohio, a man named Curtis (Michael Shannon) begins having visions of bad things, apocalyptic storms of rust-colored rain, attacks on his family by faceless assailants or even his family's dog. His wife, Samantha (Jessica Chastain), and their deaf daughter, Hannah, remain in the dark, as Curtis goes deeper and deeper into a paranoia nobody could fully understand.

At work, his best friend Dewart (Shea Whigham) notices something strange is happening. Curtis holds it close. His mother (Kathy Baker) had a mental breakdown when Curtis was a teenager, schizophrenia was the cause. Is this what Curtis is experiencing? Is it in his mind? I can't be. It seems too real. His life begins to unravel with each new vision of storm clouds or menacing flocks of birds.

In a scene of unreal power, we find why Michael Shannon is clearly Jeff Nichols' brother in filmmaking. Shannon's work here is the best performance of 2011. He has the ability to portray denial on his face and in the next moment pure fear and anger. The scene is at a town picnic, where Curtis, now having lost his job and livelihood, friends and nearly his family, after going into debt on an elaborate storm shelter in the back yard, is confronted by Dewart. The confrontation becomes a fight and the fight becomes an emotional breakdown rarely seen in the movies.

Like with Shotgun Stories, Nichols builds an intense dread out of showing us the build up and then leaving us in the aftermath. He believes in his audience and wills us to believe in his characters. I have some issues with the ending of Take Shelter. It's a conundrum, which I suppose is the point, but it serves, I also suppose, as a cyclical way of showing us once more what we've already seen. In that, we are forced to be Curtis one last time. It is deeply affecting.

Now, Mud. It is one of the most beautiful coming-of-age stories ever told. This coming from a guy who teaches coming-of-age stories to teenagers for a living. And it is also here that Jeff Nichols becomes a Southern version of early Spielberg, spinning a yarn about growing up and falling in love and losing it and fighting for it anyway.

Tye Sheridan stars as Ellis, a poor kid of 14 living on a house boat on the Mississippi River in southeast Arkansas. His father, Senior (Ray McKinnon), makes a living as a fisherman. His mother, Mary Lee (Sarah Paulson), wants to move into town. There is a rift in Ellis' family. At the same time, Ellis and his best buddy, Neckbone (Jacob Lofland), run around the woods and float the river island to island hoping Senior doesn't find out. On one of those islands, it is told that there is a boat in a tree, lodged by a flood years earlier. No sooner than the boys find it, they also find a rough-looking man they call Mud (Matthew McConaughey). He is on-the-run, hiding, but the boys are so fascinated they agree to help Mud get some things from town. Then, it becomes more than that, as Mud enlists them for more, to reach out to his would be father, Tom (Sam Shepard), and the love of his life, Juniper (Reese Witherspoon).

Where Shotgun Stories and Take Shelter are more focused on an atmosphere and internal struggle, Mud is full of wonderful, exciting plot and even deeper characterization. Alienation, isolation, desperation. They are there. But they are also riddled with love...simple pure love. And a sense of adventure Nichols had not yet delivered. Ellis sees the breakdown of his parents' marriage and finds comfort in Mud's resolve to reunite with his true love. He seeks out his own love in the form of Pearl (Bonnie Sturdivant), a girl a few years older than him, attracted to his resolve. Lessons are learned. The type of lessons I certainly learned about the cost of falling in love and facing rejection and how we, as men, idealize certain women in our lives, pushing them so high as to make them fully out of reach.

There is pain in this film. Pain that I've felt and still feel every single day. Pain that doesn't go away because you see your own mistakes in it. Mud is a parable of unending power. One about what a man should be from the perspective of real men like your father, or the mystical men who somehow cross your path like Mud, and from the man inside the young boy, who will most likely go his own way.

Above all is the adventures we remember from our youth. Mud finds Jeff Nichols growing as a storyteller, and his ability to tap into more relatable emotion in this one and in his next, 2016's Midnight Special, makes him, like I said before, a sort of Spielberg. Watch Mud again and tell me you don't see shades of E.T. Watch Take Shelter and Midnight Special and tell me you don't see bits of Close Encounters of the Third Kind. He may never go full Spielberg, but he is the closest thing we have right now on a bare bones emotional and adventurous level.

Jeff Nichols is truly reconnecting me to the reasons I first fell in love with movies as a kid. And I love it.

Ranking (as it stands on one watch a piece)