Double Feature with My Wife: Swiss Army Man and The BFG 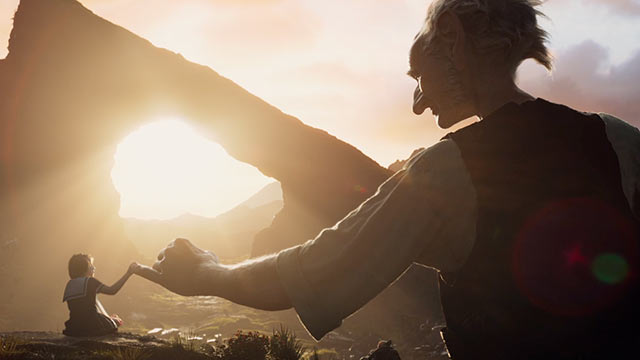 My wife thinks I'm an elitist movie snob and gets mad at me about it sometimes. Sure. She's willing to go along with my more adventurous side and see something like Swiss Army Man, even though, to her, "it just seems too weird." But I'm the guy who also wanted to see The BFG, a mainstream children's movie directed by Steven Spielberg. I will always see every Spielberg movie. It's a given. But here's what I mean:

We have just arrived at the huge multiplex (to see The BFG) after leaving the small arthouse (where we saw Swiss Army Man).

Me: You know? I find it so sad that all these people will never see a movie like Swiss Army Man.

My Wife: How can you be so ridiculous!!? Ugghhhhhhh. Why do you have to be that way!!? You don't have to judge these people, just because they go to movies strictly for entertainment?

Me: But Swiss Army Man is an entertaining movie. But I promise. I wasn't trying to be mean...I was just saying...

My Wife: But you sound like such a pompous jerk!

We get our tickets. And step inside.

Me: Listen--I really really wasn't trying to be mean about anything. I just see more movies, have seem more movies than most people, so it's hard to enjoy something that doesn't impress or do something new or match my taste. I'm sorry.

Maybe you've had this argument before. Maybe you're a snob like me. Or maybe you're more like my wife and need a safer, traditional entertainment for your Friday night movie. Maybe you get choked up at the beautiful new trailer for Disney's Pete's Dragon remake. Not a problem. It really is a great-looking trailer.

But if you're me, you continue by pointing out that...

Me: But don't you already know exactly how it will end and exactly what will happen on the way there? Haven't you seen this same movie a hundred times?

My Wife: Yeah. But it still just looks so sweet.

Me: (pondering...) Yeah. And it really does look well made.

Over at RogerEbert.com, Matt Zoller Seitz opened his review of the new arthouse buddy comedy, Swiss Army Man like this:


One thing you definitely can't say about "Swiss Army Man" is "Oh, not that again."

This film from the writer-director team of Dan Kwan and Daniel Scheinert (who are billed as The Daniels) starts on a deserted island, with a depressed man named Hank (Paul Dano) interrupting a suicide attempt to check out what he thinks is a shipwreck survivor (Daniel Radcliffe) who's washed ashore nearby. The man is dead, and very flatulent.

He goes on to praise the film for its weirdness and give it a solid three-and-a-half stars. He gave the same star rating to the new Spielberg fantasy The BFG, adapted from a Roald Dahl children's novel. While I didn't like either as much as he (though I did like them), I came away understanding something about the movies I want to see and why I want to see them and how the mainstream isn't necessarily that far away in many regards from the arthouse.

Swiss Army Man is a film built, as Seitz's summary confirms, on an epic fart joke. I can imagine the two guys named Daniel who conceived this project actually starting there. What if you could use the gas of a recently deceased corpse to propel you as a boat would across an ocean to safety? Then, that becoming: What if you could simply bring said corpse back to life in order to provide yourself a means to become a better person? To save yourself in more than one way?

Hank, the protagonist of Swiss Army Man, is a lonely guy in the loneliest of situations. We never really find out how he came to be where he is, alone on an island in the middle of the Pacific Ocean. Maybe he even made his way there accidentally on purpose. As played by Paul Dano, he begins as an emotional wreck of a human, about to hang himself out of desperation. The change comes when he finds a man (Daniel Radcliffe, the man who played Harry Potter) washed up on his beach, a man he will eventually name Manny. Then, the flatulence and the free ride to the main land, where an adventure unfolds, one in which the dead can come alive to be the hero of our hero.

Most of the first third of the movie is Hank carrying Manny through the woods, scavenging through trash, looking for food and water, Hank talking thinking nobody is listening. But when Manny comes alive, Hank does too. And this is what this movie gets so right. As humans, we need to connect to people, even in the oddest of ways. The second two acts are part action-adventure and part extended conversations about life. 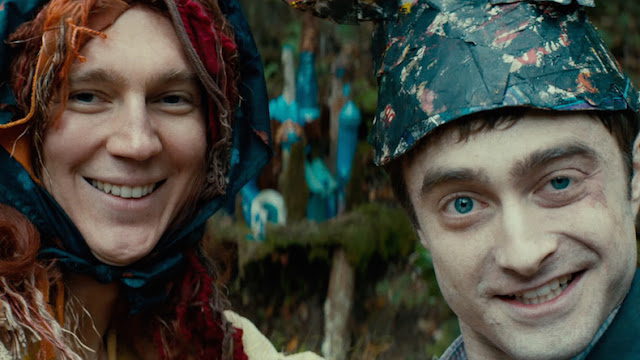 Having Manny as a tool (a human Swiss Army Knife) is one thing, and this element provides some of the most genius practical special effects in a long time. And plenty of weird excitement that I would imagine anyone could enjoy. I'm quite certain the sequence in which Hank uncovers all of the ways Manny can help him (as flint to make fire, as a means to shoot projectiles, as an axe to chop wood, etc.) will go down as one of the best of the year for me.

Having Manny as a more vital thing, someone to talk to, is another thing entirely. That Manny doesn't really remember himself or life or how anything works is where the true comedy comes in. Hank gets to teach a man about life and how it's supposed to be lived and what we aren't supposed to do. He teaches him about parents and family and love and sex (in a couple forms) and society and technology and infatuation and jealousy and on and on and on. Their conversations are hilarious in their truth and the extended fart joke becomes so as well. And Hank ends up finding out that his human fears stem from his weirdness, a weirdness that has made him alone and lonely, even before he was all by himself.

In Roald Dahl's tale of a Big Friendly Giant, a young girl, an orphan named Sophie, is likewise all alone in the world, quite literally. We don't know why she's alone (well, she says her parents died), but we don't know why she seems the outcast in the orphanage, the one who stays up nights reading while all others are fast asleep. When Sophie accidentally catches the BFG (a digital Mark Rylance) outside her London window one evening, he has no choice but to take her with him. He's been seen, and he can't be spoken of.

The BFG is lonely and outcast in his own right. He is smaller than the other Giants of Giant Country, and he doesn't eat human "beans," like the others. He lives on gross rotten snozzcumbers, drinks an upside down fizzy drink that, you guessed it, leads to an extended fart joke, and lives the life of a dreamer. In fact, he is dream-catching, cave-dwelling hermit, who visits the city at night blowing dreams through the sleepy windows of children.

Like Hank and Manny need each other, so do BFG and Sophie. The giant struggles with language, has childlike fears. Sophie is smart, a reader, confident in her new friendship. Through their adventures, they learn things about each other and life and family and love and so on. The go on an adventure together to save each other. I'm quite certain that the sequence where the BFG and Sophie seek out the Queen, both dreaming and waking, will go down as one of my favorite of the year.

Special effects play a key part here. Spielberg has, since Jaws (now 41 years old), has been a mainstream blockbuster-making special effects pioneer. Here, he continues to hone his skills with live-action motion-capture animation. But, like most big budget films these days, the effects have gotten in the way of the story a bit. The BFG gets confusing even at times, especially in the middle. I think Spielberg had a bit too much fun with his slick high-tech work and lost sight of the story a bit. But it is gorgeous to look at and exciting. And it features a performance from Mark Rylance, as the title character, that is so charming I wanted to reach through the screen and hug him. He has a way of doing that. He won an Oscar for doing it last year in Spielberg's Bridge of Spies.

Two movies: one decidedly mainstream, the other decidedly arthouse. Yet, both contain elements of story, character, and a love of the world of movies (Swiss Army Man even references Spielberg's Jurassic Park to touching, hilarious effect) that is quite clear. Both feature gross-out humor and incredible, flawless visual effects. Both are full to the brim with humor and heart. In the end, neither of these movies reached the emotional peak that I desire, though both get close. I teared up a bit at both, but I never felt full-on triumphant emotion, which, when it's all said and done, is exactly what I look for in a movie. 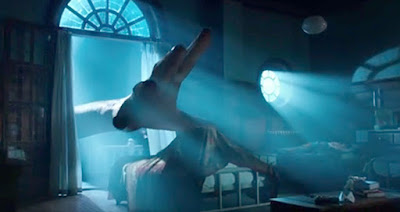 My snobbery is not exclusive to either mainstream or arthouse. It is that I'm looking for a feeling that mainstream movies don't often give me, though The BFG came close. It's the same feeling that more serious arthouse/indie movies often do, though Swiss Army Man didn't quite get there. But both movies I enjoyed watching 100%.

I've come to realize lately that I just love movies, everything I watch (99% anyway). Any movie can grab me. Some more than others. Some grab me so much I can barely contain my emotions, which is why I write about movies, here on this blog and elsewhere. Like Hank and Manny and Sophie and the BFG, I'm weird, alone in certain ways, and I need someone to talk to.