On Home Video: Everybody Wants Some!! 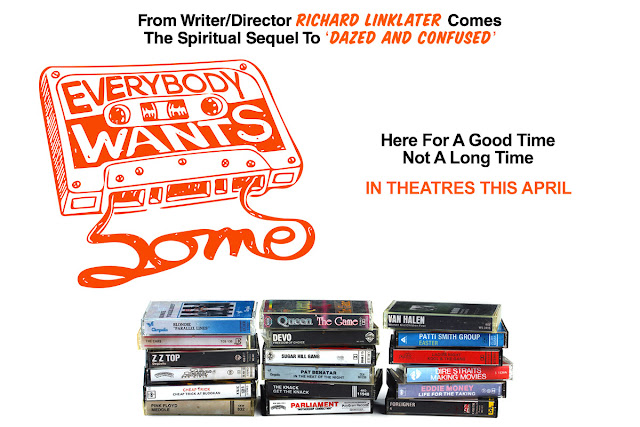 I'm pretty sure if I met Richard Linklater, we would instantly hit it off. He just gets it. His first great idiosyncratic comedy, the late-seventies one-nighter Dazed and Confused, served as an inspiration for my and my friends' teenage antics. His new one in that same vein, serves as a sort of "spiritual sequel" to the former, and works for me as a remembrance of college. Seriously, the events of this film are dangerously close to some of my college experiences. Seriously. Just not in as short a succession. (Don't judge me. I was a moron.)


What works so well about Everybody Wants Some is that for every time it goes completely over the top, it also does something so strikingly real and honest, I couldn't help but relate. Here is a movie about dudes sitting around, drinking beer, smoking a little, and talking about chicks half the time. The other half of their lives is devoted to crashing random clubs and parties and actually talking to chicks, or trying to. Occasionally, they have baseball practice. And they're good. Possible contenders. That about sums it up.

As a through line, we have Jake (Blake Jenner), one of a few new freshmen on the baseball team at an unnamed university in Texas circa 1980, and his initiation to the baseball house (since the athletic dorms don't have room for them) over the weekend before classes start. Here is a dwelling whose defining characteristic is a floor that's about to cave in. (Been there. Ask me about the house two of my best friends lived in near campus.) 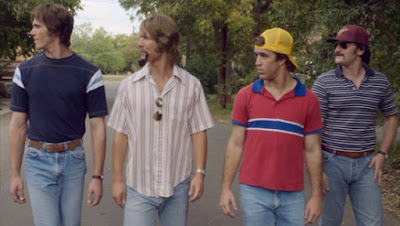 There, he meets a group of fellas (more than a dozen of them) who not only rival the gang over in Animal House but might actually beat them in terms of both drinking and chasing chicks. The wealth of great characters, all played by unknown actors, can only be hinted at. My favorites are the mustachioed older guys on the team, McReynolds (Tyler Hoechlin) and Finnegan (Glen Powell), so well seasoned...at everything. And the pothead California transfer, Willoughby (Wyatt Russell), instantly my favorite movie character of the year so far. It is Russell, so perfect as Willoughby, who charges the single best scene in the film. A simple one. The best one. One involving a record player spinning Pink Floyd's under-appreciated gem, "Fearless," four dudes, and a bong. I laughed my ass off, knowing that I have both given that rant and received it...many times. College....

This is the genius of Linklater. So many filmmakers have made movies like this. In fact, there are at least a dozen a year now. Hard R-rated comedies about dudes and drinking and parties and naked chicks. They mostly don't work (see: Dirty Grandpa). The majority that fail are missing what Linklater has...a voice. The actress Zoey Deutch plays Beverly, the artsy chick who catches our hero Jake's eye early on. A no-nonsense type ready to experience college, in her way, just as Jake is. She was also the love interest to Zac Efron in the inferior aforementioned comedy. There she was dead before the camera even rolled. Totally pointless for how good an actress she actually is. Here, she is a living, breathing human being, living it up on her own terms. It's actually refreshing.

We can bicker about little things. Sure. There is no plot really at all. There is no change in the characters. No dramatic arc. It even bothered me for a few seconds in the middle. But then I just started laughing again, realizing that these are just fun, cool, nice people. The laughs aren't huge booming ones but knowing ones, fun ones, nostalgic ones. And that's the thing... 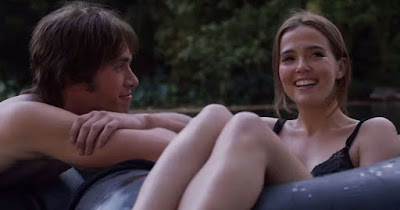 Richard Linklater started his brilliantly executed career by making a movie about his Slacker generation and followed it up with an American Graffiti-esque remembrance of high school in his time, the late 1970s. These are movies where characters actually talk, and we listen because they are us and they are our friends. That can't be said about most comedies.

Here Linklater has shown us another piece of himself, the aimless college baseball playing Texas kid he was by 1980, and he has captured another era and its music (an expansive mixture of rock and disco and country and hip hop and even some New Wave) and its mindset and its slackers and it is all joyous, ending at a beginning instead of an end. Yes! That's something he does, isn't it? Slacker? Dazed and Confused? The Before Trilogy? Waking Life? Boyhood? Now, Everybody Wants Some.

Email ThisBlogThis!Share to TwitterShare to FacebookShare to Pinterest
Labels: 2016 in Film, 2016 Movies, Dazed and Confused, Everybody Wants Some, Movie Reviews, On Home Video, Richard Linklater