"Late-period Allen" seems to be the buzz word of the moment when reviewing Woody Allen's yearly release. I'm not sure what that's supposed to mean, and it's a categorization I'm sure he would hate. I mean, he just keeps making movies and probably will until he dies. Some land. Some don't. I usually enjoy them no matter what. He doesn't really care either way, most likely. Another year. Another Woody. And, no surprise, I like this one.

Café Society is a funny movie, a romantic one, and a beautifully shot period piece that plays on classic Woody Allen themes, most notably the difference between Los Angeles and New York. Jesse Eisenberg is the Woody persona this time around, a neurotic New York Jewish kid named Bobby, who makes his way out to Hollywood in the late 1930s to land a job working for his Uncle Phil (Steve Carell), a successful talent agent quick to drop a big name at club or café or dinner or cocktail party. While getting his feet wet, Bobby falls for Uncle Phil's secretary, Vonnie (Kristen Stewart) and makes friend with a married couple of socialites played by "late Woody" regular Parker Posey and Paul Schneider.

Back in New York, Bobby's gangster brother, Ben (Corey Stoll), a guy who sits at the dinner table counting his extorted thousands while Mom (the brilliant Jeannie Berlin) and Pop (Ken Stott, also brilliant) turn a blind eye in grand fashion, is making his way into the nightclub business. When he succeeds, of course, this prompts Bobby back into a New York state of mind. But Vonnie can't bring herself to leave LA.

The classic rom-com story plays out in fairly predictable fashion. True. But it is so gorgeously composed, the dialogue written with such wit, it's hard to sit there and think about any flaws or over simplicities in the plot. It's just enjoyable.

Italian cinematographer Vittorio Storaro is the big hire for Woody here. His work is exquisite, stylish, cool, the frame gorgeously painted with the sun and glitz of California and the chandelier elegance of New York's high life. The costumes and production design likewise match Woody's vision here. It begs to be seen on a big screen, unlike last year's effort from Woody, Irrational Man, a much much darker comedy that is also worth seeing.

Not everything works. I pause with a bit of disappointment in the casting of Steve Carell. He just isn't really believable as a Hollywood suit of this era, at least in my mind, and the appeal his Uncle Phil is supposed to have doesn't come through.

Eisenberg and Stewart are both great though, sharing once more an obvious chemistry after the brilliant Adventureland and the not-even-close to brilliant American Ultra. Corey Stoll's work as brother Ben is commanding in its hilarity. (Some of the best bits of the movie involve his willingness to dispose of bodies when he needs to.) Stoll plays a New York tough just as well as he played the great Ernest Hemingway in Woody's last masterpiece, Midnight in Paris, and I'm beginning to wonder if there is anything this guy can't do. Blake Lively's small turn as another love interest for Bobby is nicely played, and Anna Camp (of Pitch Perfect and True Blood fame) pops up as a rookie working girl in one of the movie's most hilarious scenes.

Much of the humor, of course, comes from Woody's dialogue. He's still got it. Great one-liners that poke fun at everything from Italian-American cuisine to Judaism itself, sometimes even together, "I grew up Jewish, so my Mom always burned the meatballs. She had to make sure she killed all the germs." Plenty of that sort. Plenty of laughs in the screening I attended. 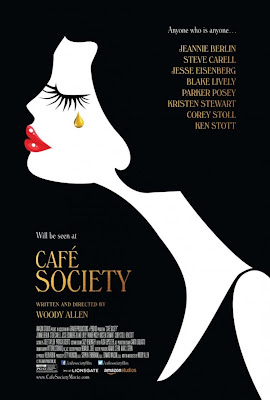