In Movie Lines: The Return (with a World Record College Football Game, George Clooney, an Ode to Texas....and Links)

I am a regretful movie lover these days. I find myself just not having the time and/or energy to dig into great movies. I'm working...a lot. The first couple months of the school year for a teacher being the most brutal drain of mind and body imaginable. I know. I know. We get two months off in the summer, but come August, it's full throttle. Come September, you wonder where your life went. By then, it's football season.

And in East Tennessee...that means something. For example, this one, the one where my wife and I spent more money than we should've in order to camping at a drive-in movie theater... 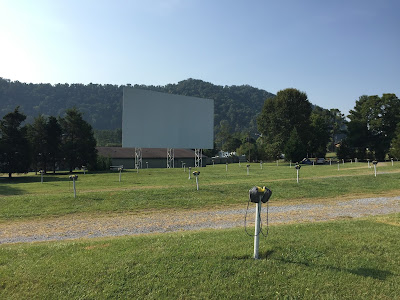 ...in Bristol, TN, where we camped across from a guy called Steve the Pirate, who drives "Piddlefart", the neon green Ford Bronco,... 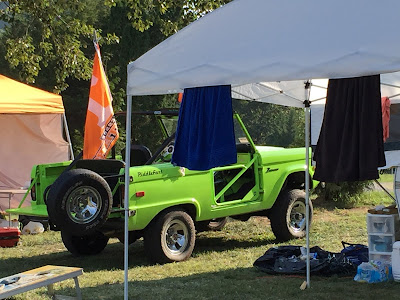 ...and saw a college football game at Bristol Motor Speedway, a venue of 160,000 seats. My Tennessee Vols played the Hokies of Virginia Tech in The Battle at Bristol,... 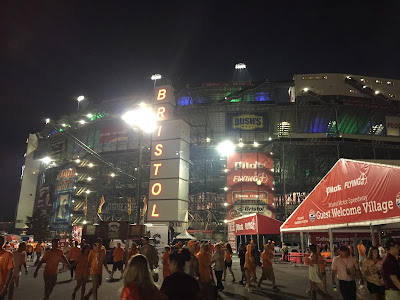 ...where you climb walls to leave as you burn, burn, burn under fireworks, leaving as one of the mad ones,... 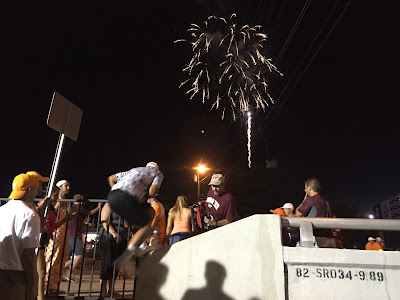 ...and, then, on the way home, you see this, and think twice about who you've been high-fiving. 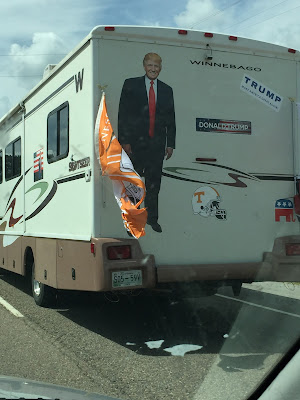 Go Vols! We won 45-24. And are part of the crowd that broke the Guinness World Record for Biggest College Football Game.

Because I have managed a few.


Lone Star is a brilliantly and boldly written movie. A story expertly told, sprawling, layered, perfectly plotted. It's my first experience with John Sayles, who wrote, directed, and edited. You can feel that watching it. This is a work of complete and utter control. He really succeeds all around, making a movie as much about the whole of Texas as it is about its own brilliant central plot. Matthew McConaughey and Kris Kristofferson own their small roles, as does the always great, late Elizabeth Peña. Chris Cooper carries the thing through all its shifts and every thread. Great film! ★★★★


Money Monster is a film I had much higher hope for. In all honesty, I don't think financial crisis movies can be done anymore. Last year's The Big Short sort of broke the mold, the comedy and the drama both worked equally. Director Jodie Foster's try at the hostage-crisis-while-making-a-statement flick worked from time to time but ended up becoming a bit too obvious and ultimately flat.  Here is a drama that falls to some really misplaced attempts at humor that just don't work. Clooney and O'Connell do well enough with the heavy lifting, but it's just not enough. ★★


My wife insisted on watching this after a friend of mine and I were talking about it recently. It's one of the great slow burns of all-time. Always solid but landing in the most quietly triumphant of ways in its final act. Tony Gilroy, known for writing The Bourne Trilogy among other solid thrillers, makes a directorial debut that is nothing short of remarkable, gets a Best Picture and Best Director nod in one of the best years for movies in my lifetime, and, to be clear, deserved every bit of that. This is a movie made by an expert. I wish old Tony would show us something like this again. Clooney, Swinton, Wilkinson...unreal performances. ★★★★


It's on the lower end of Fincher's filmography for me, but it's way better than I gave it credit for. This watch showed me something I didn't see the last time I saw it, as a stoned college freshman in a movie theater. This sequence here is Fincher's visual virtuosity on full display. Just sick camera moves matched by slick editing and visual effects. A style on its way to perfection. ★★★1/2

Allie at Flick Chicks reviews Sing Street, a movie I can't wait to see and am mad I missed.

Fisti at A Fistful of Films does his thing on the year in movies 2000.

Robin at On the Screen Reviews remembers some great movies scenes from 2016.