In the midst of this "heydey" of remakes and reboots, I must admit that I rolled my eyes at even the prospect of a remake of The Magnificent Seven, itself, of course, a reimagining of Kurosawa's 1954 epic Seven Samurai, a film I've put off for years for its three-and-a-half hour runtime alone. (And I'm sure many of you Western buffs will scoff at the fact that I haven't seen the original western either, at least not in its entirety.)

It doesn't matter. It's a story we all know. I've seen countless other films with the same essentials. On my mind, specifically, is the underseen 2003 Kevin Costner western, Open Range. The said essentials, in the case of this take on the story, are that a ruthless robber baron called Bartholomew Bogue (Peter Sarsgaard) and his group of thugs, mostly town lawmen, terrorize a small village in California circa 1880. After Bogue murders her husband in a chilling, masterful opening scene, Mrs. Emma Cullen (Haley Bennett) sets out to find the best of the best, a bounty hunter called Chisolm (Denzel Washington), who she thinks may be willing to take on Bogue's army and restore peace to the townspeople.

Of course, he won't be able to do it alone, so Chisolm assembles a team, equal parts gunslingers and outcasts, to help him out. Chisolm never misses his shot, to be sure, and he instantly finds Josh Faraday (Chris Pratt), a card-playing, hard-drinking gunslinger, who helps him and Mrs. Cullen track down the rest:  the Confederate rifleman, Goodnight Robicheaux (Ethan Hawke); his knife-wielding sidekick, Billy Rocks (Byung-hun Lee); the frontiersman Jack Horne (Vincent D'Onofrio); the lone Apache warrior, Red Harvest (Martin Sensmeier); and Chisolm's next bounty, the Mexican sharpshooter, Vasquez (Manuel Garcia-Rulfo). All fit the bill. All look the part.

And all seven bring a particular expertise with a personality to match and, in unusual form, given the overloaded summer messes known as Batman v Superman (which I didn't see) and Suicide Squad (which I sort of liked), are given pretty much equal time in terms of setup during the inevitable roundup sequence. It slickly glides along, interviewing with kills.

If my love for Denzel Washington, the action hero, didn't fully get me through the door on this one, then it was Chris Pratt who did. There is nothing that dude can't do. But never did I expect to be so in awe at the reunion of Washington and Ethan Hawke here again with director Antoine Fuqua, such a perfect trio in Fuqua's 2002 crime drama Training Day. I was actually giddy when they showed up in the same spot. Then, Vincent D'Onofrio shows up.

And he steals the whole show. His fat, bearded, coonskin cap-wearing Horne is comic relief, voice of reason, and mastermind. D'Onofrio plays him with this sort of off-beat rhythm, every word hanging on a high-pitched release. It's actually hilarious. Then, he becomes the man with the plan, and we sense we are in good hands, even when the script goes to the inevitable "planning session," where the characters tell us what's going to happen, leaving out just enough to keep us surprised here and there in the final act, a classic western shootout easily as fun as you'd expect. There's some great pacing at work in The Magnificent Seven that sets it up there as one of the year's best action movies. And it looks great.

When you have such a standard storyline, it's hard to add anything new. I can't seem to hang onto much as far as the dialogue is concerned, though there are a few solid zingers, delivered mostly by Pratt and D'Onofrio. Likewise, it's hard to add anything new for such familiar actors when there are so many familiar actors in the same picture. I felt myself wanting more Ethan Hawke, more Chris Pratt, and especially more of the lesser-known trio of the seven. And I have to tell you, the final seconds leave a lot to be desired. (I can't believe a screenwriter the caliber of Nic Pizzolato, of HBO's True Detective fame, would even go there.)

The best thing about The Magnificent Seven is that it made me want to go back and watch the films that inspired it, and maybe even some of the films those films already inspired, at least the ones I haven't seen. I suppose something like this still works because it's comfortable, which, in this case, just isn't a bad thing. I saw it on a Friday night, a date with my wife. We laughed. We hung on in suspense. We escaped. 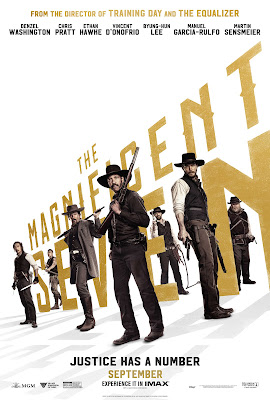 Based on the screenplay for Seven Samurai by Akira Kurosawa, Shinobu Hashimoto, and Hideo Oguni