My own angst as a teen had nothing to do with the world-at-large. It was insular, singular, riddled in longing and unchecked romanticism. In fact, I recall a recent conversation with my wife about the "drama" flowing through the halls of the middle school where I work. Teenagers deserve their feelings, it was decided. I remember as much. The wanting. The realness of those feelings, mostly in my pining for what literature would call that Obscure Object of Desire.

This Thursday on Wandering through the Shelves Thursday Movie Picks is a gut-punch into the painful stress of my own romanticism, my own Teen Angst.

Here are my picks, all about boys, sensitive boys tortured by a search for the meaning of life and love: 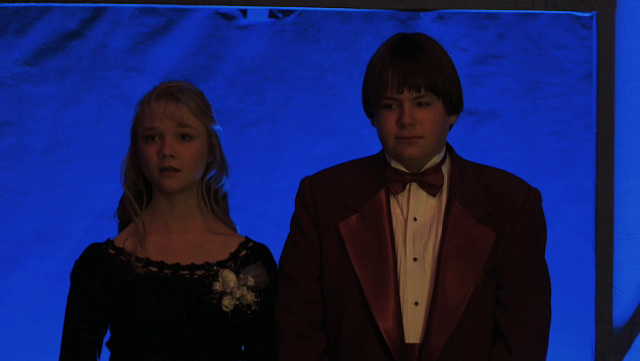 Angus Bethune (Charlie Talbert), an insecure, overweight high school science nerd, who doubles as a pretty good football player and lives with his mother (Kathy Bates) and grandfather (George C. Scott, in one of his final roles), finally has it out with his lifelong nemesis (James Van Der Beek) while dealing with the torture of confronting his lifelong crush (Ariana Richards). I watched this movie all the time as a young teen. It seemed made for me.

Terri (Jacob Wysocki), an insecure, overweight high school kid, usually clad in pajamas, lives with his elderly uncle (Creed Bratton) and generally lacks any direction whatsoever. But he has compassion, specifically for the school's budding "bad girl" (Olivia Crocicchia) and its well-known "troubled kid" (Bridger Zadina), and he has support from the warmest assistant principal there ever was (John C. Reilly). This movie breathed life into me when I saw it. It contains a sleepover scene so true and painful, I can hardly stand to think about it. It just warmed my heart, broke it, and warmed it again. Here's my full review.

Ellis (Tye Sheridan) is confident but naive, about to head into the world of high school as his family and his home crumble around him. He pines for an older girl, an unattainable one, as a drifter with a troubled past, a fugitive called Mud (Matthew McConaughey), spins a yarn about the beauty that got away, his lifelong love (Reese Witherspoon), who punished him as he punished himself. Few movies have taught me more about myself as a young man than this one. It is a masterpiece, one of the most beautiful stories ever told.