Speaks Reviews: The Edge of Seventeen 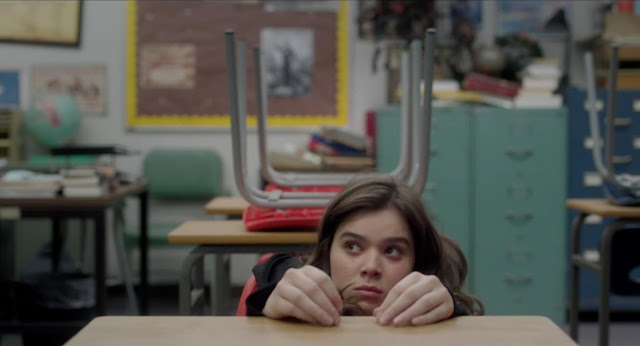 Consider the year 1999. It was 17 years ago. I was a high school sophomore. The biggest teen comedy of the year was a brutally honest but ultimately raunchy movie for teenage boys called American Pie. It is still one of my favorite movies. Then, remember the biggest teen comedy for girls that year...10 Things I Hate About You, which is on my mind right now. It just got added to Netflix, and my wife jumped at the chance. She loved Heath Ledger, you see, and, even more so, Joseph Gordon-Levitt.

You probably remember...it starred Julia Stiles as a 17-year-old, quick-witted, if over-written, anti-social "movie character." A girl claiming she didn't want to be noticed by proudly proclaiming she didn't want to be noticed. If it seems like I'm crapping on that movie, it's because, as sometimes funny and endearing as it is, it is also completely false. At least American Pie had the honesty thing going for it. I mean, I talked about boobs and handjobs all the time in 1999. Nobody quoted Shakespeare or sang Frankie Valli on the football field. 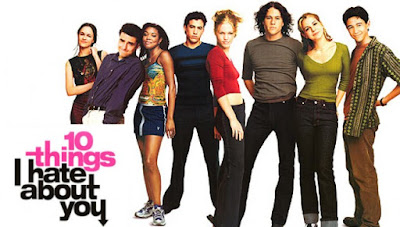 If you travel back a decade to 1989, you might find yourself in another world entirely and in the arms of one of the truest teen comedies, Cameron Crowe's directorial debut Say Anything... Cameron Crowe's talents have gone to waste in recent years, but his early ideas caught the attention of James L. Brooks, who helped get Crowe his financing, something he did again a few years later for a Texas kid with big ideas named Wes Anderson (heard of him?).

Hailee Steinfeld, most recently seen as the newest member of the Barden Bellas in Pitch Perfect 2 but also an Oscar nominee for her debut performance in Joel and Ethan Coen's update of True Grit, stars as Nadine, a pretty but somewhat anti-social 17-year-old navigating high school hell in suburban Oregon. Her brother, Darian (Blake Jenner), is an all-star athlete with plenty of friends and the adoration of Mom (Kyra Sedgwick). It seems Nadine's only friend is her Dad (Eric Keenleyside) until she meets Krista (Haley Lu Richardson) in 2nd grade and finally learns what it is to have a best friend.

Time passes, the elementary playground becomes standing in front of the bathroom mirror in complete horror at the zit on your chin. Life intervenes, leaving some sadness in its wake, the loss of her Dad, her second-best friend. More time passes, and Nadine is 17, still at it with her Mom, still annoyed at the thorn in her side, her seemingly perfect older brother, still best friends with Krista. 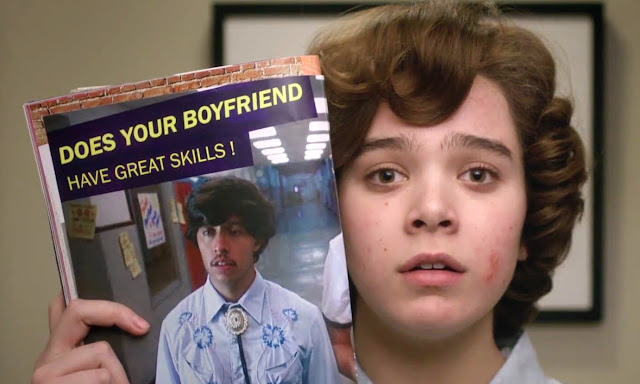 But now they've gotten older, making it to junior year, the everyday desires of adolescence have come fully to the front and center. It is these desires that will fuel the rest of the film, starting with the introduction of the first genius wrinkle in Nadine's narrative:  The older brother she can't stand and the best friend she loves really really like each other. A downward spiral ensues...but not in the ways you might think.

Like so many teen comedy heroines, Nadine puts on an anti-social front. Her best friend outside of Krista is her history teacher, Mr. Bruner (Woody Harrelson). She dresses in that weird eclectic way we're used to by now in this type of film. The difference here is that she isn't so self-serious about it. She's just a kid trying to figure things out.

Writer-director Kelly Fremon Craig allows us to immediately see right through Nadine's "I hate everyone" facade, revealing her as a wonderful young lady simply waiting for someone to make her feel that. Like many teens, Nadine doesn't know what she wants but acts as if she does. What we see, however, is not what she sees. This is the genius of this script, one of the smartest of the year.

Hailee Steinfeld is an actress who can rattle off dialogue with the best of them (see: her upstaging of Matt Damon and Jeff Bridges in True Grit), but she can also express fear, anger, sadness, frustration, confusion, anxiety sometimes within the same scene without missing a beat. That she gets to do both here is a testament to the talents of Ms. Craig, who has written dialogue that is both honest and hilarious, while creating visuals that match that very same tone. Consider an early scene where, upon finding out that Mom is going out of town for the weekend, Nadine calls her brother for dibs on the house and proceeds with Krista to get hammered on cheap vodka and orange soda. Craig's camera captures the perfect moments, the progression of the night, which are then shuffled together at incredible speed. It's so much fun. I horse laughed. 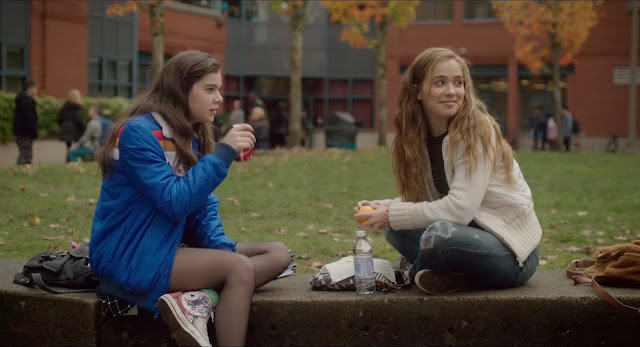 At the center of this movie, though, is not really some sort of angry falling out with her friend, though that is inevitable and an important aspect of the plot, but an exploration of a lost girl without a Dad. On the other end of this, she doesn't know how to navigate her feelings towards boys at school. We see her heavily desiring (with vivid language) a good-looking hipster sort named Nick. When we see Nick, we see a jerk loser. We see her enjoying the company of and fully matching wits with Erwin (Hayden Szeto), a Korean-American guy in a couple of her classes, but totally oblivious to his obvious crush on her. When we see Erwin, we fall in love. We see her clinging to Mr. Bruner, bashing his teaching style, unloading her problems. When we see Mr. Bruner, we see the Dad she lost. None of this feels forced, nothing is over the top. Like I said...genius.

The casting of this movie is brilliant. In addition to the Oscar-worthy Steinfeld (no kidding!), we have veterans like Kyra Sedgwick, so perfect as the lonely, manic middle aged mother, seeking some sort of happiness with the years she has left to fully experience life. We have up-and-comers like Blake Jenner (seen earlier this year in Richard Linklater's Everybody Wants Some!!!), so perfect as the prodigal son who would never boast about his mother's favor and is really one of the most likable movie siblings ever found in a teen comedy. Haley Lu Richardson and Hayden Szeto make perfect school friends, equally supportive of Nadine, no matter how much she takes and doesn't give back.

And then there's Woody Harrelson, one of the most interesting, varied, brilliant actors of my lifetime totally toning it down and just being real. His Mr. Bruner is the single most honest depiction of a burnt-out high school teacher this side of Matthew Broderick's Mr. McAllister in Election. Harrelson sees that and raises it. He raises it by lowering the stakes. He teaches high school history, and he isn't damaging anyone. He pops in a video some days. He grades papers. He eats his lunch alone in his classroom, except on days when Haley interrupts him. He matches her wit with patience...and sarcasm. Harrelson and Steinfeld have the best on-screen chemistry of any two actors I've seen in a movie this year...and it is a far cry from a romantic one. 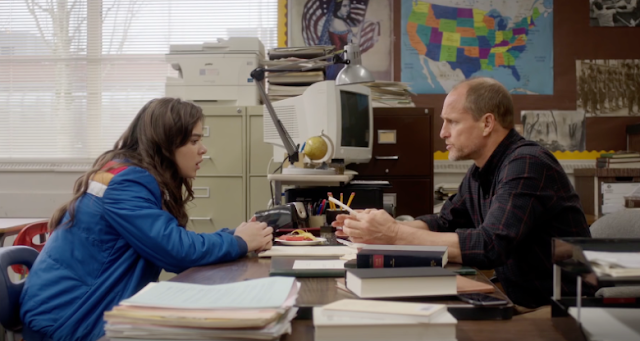 Movies like The Edge of Seventeen are perhaps once in a generation. I have written a book here and haven't scratched the surface. I've neglected to properly express how unbelievably funny this movie is, instead focusing on its unending tenderness. I have given plenty of props to the brilliance of Kelly Fremon Craig's script and her direction, but I haven't mentioned my favorite part of it...that it contains the most honest, sincerely, truthfully, life-like, vulgar dialogue about sex I've ever heard in a teen movie.

Right now, this film is in a wide release. It is drawing a teenaged audience, and, if my screening was any indication, that audience is finding it. I can't make the argument that movies this smart for teens are so usually hidden from their view. I can't tell you how satisfying that is. It's my first glimmer of hope for the future in two weeks. Things are looking up. 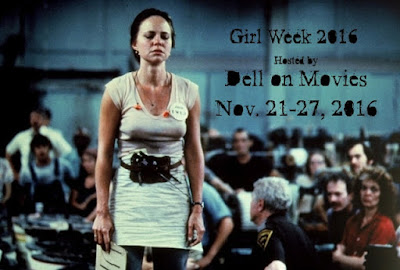 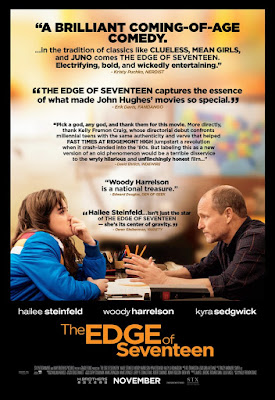 See this movie immediately and with your whole heart. It will easily allow you to do so. Forget the stupid R-rating, though it is deserved for all the F-bombs, it should be mandatory viewing for every teenager in America. It is in my top three of the year at the moment.