Mike Mills has a way of creating unusual sensations in the audience. Visuals so real and relatable you feel the elation lifting you out of your seat as if to be made lighter by the comfort of seeing a past life so close to your own. Isolated, staged images, stock footage, photographs, facial expressions, memories, thoughts, all blended together as your own dreamy adolescent musings or the remembrance of them as an adult. I've no doubt done a bad job of getting the point across. To appreciate a film of Mike Mills is to see one.

This one, a follow-up to Beginners, the semi-autobiographical story of his father coming out and finding love late in life, is 20th Century Women, the semi-autobiographical story of his mother figuring out how to get him through his teen years without a masculine presence. I found myself recalling Chuck Pahlaniuk a la Fight Club, "We're a generation of men raised by women. I'm wondering if another woman is the answer we need." Well, for Dorothea (Annette Bening), that seems to be the only option.

She owns a perpetual fixer-upper, an old mansion near the Pacific coast of Santa Barbara, CA, circa 1979. She is 55 years old. Her 15-year-old son, Jamie (Lucas Jade Zumann), is not quite as lost as she may think, but her ways have given way to an opportunity. Her home is a revolving door of friends, acquaintances, boarders. Her two tenants are William (Billy Crudup), an ex-hippy handyman, who means well but doesn't connect with Jamie on an interest level, and Abbie (Greta Gerwig), a punk-rocker with purple hair, who is recovering from a life-changing illness that has left her near hopeless for the future. Then there's Julie (Elle Fanning), the object of desire, a 17-year-old daughter of a therapist unable to cope with the idea that her best friend Jamie now wants to touch her when she sneaks in at night to sleep in his bed (Oh! How I know that torture!). Dorothea decides these two women will be able to offer him life experience that she can't give him herself.

While the main action of the plot takes place over the summer of 1979, the film holds actual time as loosely and as tightly as it feels like in the moment. So much so, that it is hard to even fathom how director Mills and his editor did it. Popular fiction and literature and self-help books of the time make appearances, in sound and sight and specificity. Popular songs, mostly punk and hardcore from the late 70s, are used to anchor thought and reflection on the current states of the characters and their pasts and where they may all end up. The most famous speech of the Jimmy Carter administration plays a key role. And the rooms of Dorothea's home seem sometimes to be shot as cutaways, much like Wes Anderson does, the fourth wall removed, allowing us to watch as we glide from room to room. He uses fast motion, sometime to quite practically move things along, sometimes touching the frame with a sort of psychedelia I've never seen before.

The way it all seems to work so well is credit to Mills as a screenwriter, now with an Oscar nomination for Best Original Screenplay. The film shifts voiceover in such a way as I've never seen. All of the characters exposit and explain and remember, even speak of a future of which we only get small glimpses. But they also talk to each other in honest truths. They say things that actual people say without fear of embarrassment because they truly care for each other. So many movies miss this, that sometimes its best to forsake the comfort of the audience in an attempt to make them feel. This is a film that treats women with respect and has them talk about basic issues women face. The women of its title have periods and talk about it. They have sex and talk about it. They have dealt with miscarriages and unwanted pregnancies. They have gone to Planned Parenthood for counsel and help. They have really sage advice about and for men that is universal to men, all men.

And it's all so damn relatable, it's actually funny. I laughed my ass off. I laughed out loud more than any other movie this year.

The masterstroke on another level the casting. All are perfectly cast, but let's focus on Annette Bening, who is due an Oscar and didn't quite make the cut this year. She is a force to be reckoned with. Just as the film uses unexpected visual cues to lift us out of ourselves, so does Bening's face. Her Dorothea is an unconventional type, the type to ask the school principal why it matters Jamie missed some school if he had something else he had to do that day. Only it's not that she asks, it's that she looks at the principal with such incredulity. She looks the same way at anyone who challenges her, so challenging them. Mills shows us her face, and the way it changes. He does this a lot. It's the right call. It's powerful. 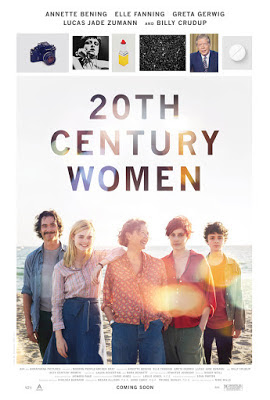 On a Personal Note

When I figured it all out, I got the purpose behind Mills use of that Buzzcocks song I listed at the start. I thought of the tall summer blond beauties of my own youth, the older women who taught me things I may not have been ready for, the mother who looked at those who would hold me back with incredulity, memories full and real even romanticized I can feel them with every sense. And I want to touch them.