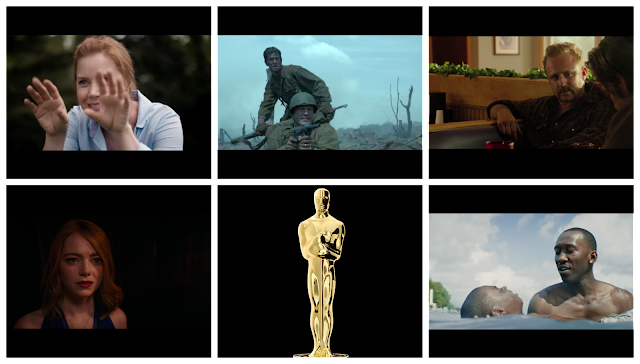 This piece is my submission to The LAMB Devours the Oscars 2017, a roundup of Oscar talk from around the movie blogosphere.

Over the years, the Oscar for Film Editing has been one of my favorite to predict. And this year, while editor Tom Cross' work on "La La Land" seems a lock, features a race of nothing but the best. In fact, all of these movies are of the highest class, narratives driven by directors who have chosen exactly the right people to assemble their visions in the editing room.

Each of these films provide plenty grip us as whole stories, scene-by-scene crafted shot-by-shot to create the highest emotional responses possible.

Here are the 2017 Academy Award nominees for Achievement in Film Editing:

With his second nomination in the category, Joe Walker's work with director Denis Villeneuve on "Arrival" thrives within the timeline tricks of the narrative itself. The film is deliberately paced as a whole, suspenseful, heart-rending, slowly revealing and re-revealing events past, present, and future. Walker's work, especially in conjunction with Jóhann Jóhannsson's score.

Also with his second nomination in the category, John Gilbert's work on Mel Gibson's visceral, violent WWII film "Hacksaw Ridge" shines the most in the epic final third of the film, the battle sequence on the barren wasteland the title suggests. Fast, jarring, incredibly effective, we see everything at varying speeds and feel everything just the same:  fear, suspense, excitement, gratification.

With his first Oscar nomination, Jake Roberts' work on director David Mackenzie's masterful, perfectly-paced modern Western "Hell or High Water" is at its fullest effect when the film's two protagonists, down-and-out brothers played by Ben Foster and Chris Pine making good as bank robbers, are seen together. Just as director of photography Giles Nuttgens spaces them within the frame, Roberts' editing highlights the nuances of the performances, the closeness of their relationship, the differences in their personalities and behaviors.

After winning in this category for "Whiplash" in 2015, Tom Cross seems like a sure thing to go two-for-two. His work here with director Damien Chazelle again on "La La Land" is as vibrant as the film itself, managing Chazelle's highly-active long takes as well as his attention to detail within each shot. The most striking moments come when Cross builds moments between the film's two stars, Emma Stone and Ryan Gosling, managing also their chemistry, finding equal weight to their individual and mutual stories.

Possibly the truest achievement in film editing this year is the move director Barry Jenkins made to tell a story in three distinct acts with three different actors. His editors made that work. Nat Sanders, here with his first nomination, found all the right ways to get us into the perspective of Little in the first act as well as the teenage Chiron in the second, employing jump cuts within scenes, similar shots, to offer small breaks, breaths of air, if you will, in the intense intimacy. Joi McMillon (the first African-American woman to receive a nomination in the category) shines with her work in the film's Wong Kar-Wai-inspired final act, a languid, tension-filled meditation on unrequited love and redemption.

And the winner is... 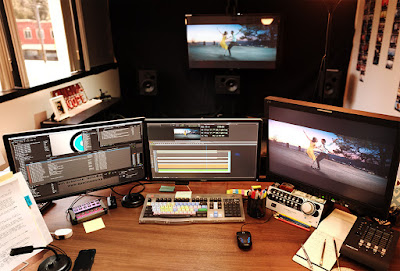 Tom Cross will win, deservedly so, for putting together the most MOVIE movie of 2016. "La La Land" just moves, and there's no other way to put it. It is solid work. The sad thing is that editors of "Moonlight" and "Hell or High Water" both do things with perspective, relationships on such a more personal level. "Moonlight," especially, seems almost fully made in post-production, while "La La Land" seems more planned--blocking, camera, choreography.

Then, of course, there is a nearly unbelievable snub in this category. I like Jennifer Lame's work on Kenneth Lonergan's gorgeous "Manchester by the Sea," a film that hinges on flashbacks perfectly blended into the main storyline. I find it odd that the most solid story of the year missed here. Then again, I don't know who to knock out. The technical achievements of "Arrival" and "Hacksaw Ridge" can't be denied.

Anyway...best to all the nominees!