"But soft! What light through yonder window breaks? / 'Tis the east and Juliet is the sun. / Arise, fair sun, and kill the envious moon, / Who is already pale with grief / That thou, her maid, art far more fair than she." (Romeo and Juliet, Act 2, Scene 2)

The metaphor within a metaphor, the iambic pentameter, the painful foreshadowing, the tragic loss of innocence, of love. This is why I studied English in college, why I thrive in a life of other narratives, why I love literature and film.

I'm back at this Thursday Movie Picks thing, after being away a spell, and I'm not sure how regular I'll be at it, but I like this one, and I want to pay tribute, for Valentine's Day, to the original English romance...in several iterations.

The most iconic romantic drama as the most iconic Broadway musical. Verona is New York City. The Montagues are a white street gang called The Jets. The Capulets are Puerto Rican immigrants trying to make it in the face of intolerance. Romeo is Tony. Juliet is Maria. "Somehow, someday, somewhere..."

The language of Shakespeare unchanged, the setting still Verona (but not actually), the swords are guns, the family name's the same. Two of the hottest young stars of the time (Leo and Clair) in Baz Luhrmann's sweaty Shakespearean fever dream perfect for the MTV generation. And damn entertaining. "Love me, love me, say that you love me..." 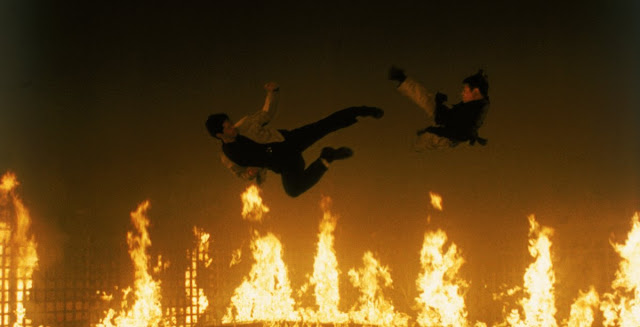 Jet Li is Romeo. Aaliyah is Juliet. I don't remember anything else, but I remember seeing this randomly when I was in high school, a trip to the mall with Mom, my Litter Sister's choice, and I freaking loved it.

Will Shakespeare (Joseph Fiennes), a blocked up, penniless playwright in London, meets Viola de Lesseps (Gwyneth Paltrow), then her alter ego, a young male stage actor, in a simultaneous play on Twelfth Night and Romeo and Juliet, all the while Will finds the will to write his greatest sonnets and this the greatest tragic romance. The screenplay by Tom Stoppard is an English major's dream, complete with the lore, the wonderings, and the period detail. It won an undeserved Best Picture Oscar (which should've gone to your favorite of the two WWII films), but it's a great film nonetheless.