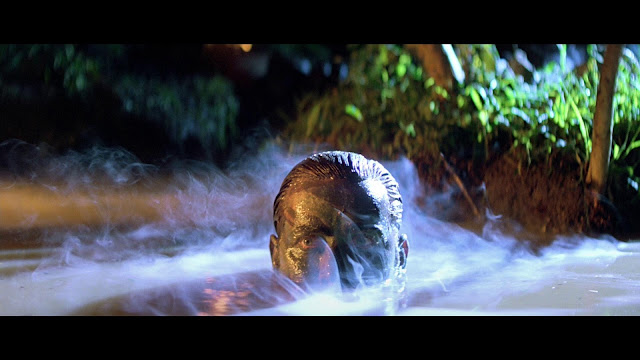 Francis Ford Coppola once said, in the cocksure way only a knowing genius would, "My film isn't about Vietnam. It is Vietnam."

Now, to be sure, it's not...but it looks, feels, burns, tastes, smells, hurts, terrifies pretty much exactly like I understand it to. It was shot primarily in the Philippines and became what the finest film lore will tell you amounted to nothing short of a living hell, an apocalypse in and of itself (so it had the art as truth angle pretty locked down). Years later, after praise of the film only grew and the lore only more important to American cinema, Coppola's own wife would release, in 1991, a documentary called Hearts of Darkness: A Filmmaker's Apocalypse, which delves into the apparent trouble that came of nearly every aspect of making this film...casting changes, script and shooting issues, went way over budget, etc. Coppola sank some of his own money into this thing and nearly went under. Many regard it as the best Vietnam film ever made and on the shortlist for best War film in general.

But does this film match all of its legend? 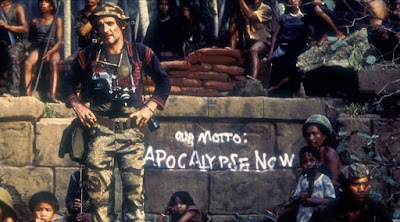 The answer is YES.

To be upfront, I have seen Apocalypse Now Redux, the too much longer 2001 Director's Cut version, about five times. The DVD I was gifted only had that cut, and I never ventured back to the theatrical...until now. It is a downright real and true masterpiece. Visually, one of the most astounding films I've ever seen. I can't imagine how these shots, as much as Coppola filmed in the making of this movie, came together in such a way as to create such a perfect tragedy of the human mind at war.

Adapted from Joseph Conrad's 1899 novella Heart of Darkness, the Congo of Conrad's tale is replaced with the Vietnam War circa 1969. Special Ops Captain Willard (Martin Sheen) is poisoned by war, obsessed, cursing his R&R, drunk when he gets the call to join a Navy patrol boat and its four-man crew up a river to find and terminate an off-the-reservation Special Forces Colonel named Kurtz (Marlon Brando), now commanding missions off the grid and behind enemy lines in Cambodia. Willard's journey only grows deeper and darker is it continues, as he becomes seduced by the dossier of Col. Kurtz, obsessed with the questions of what this war has done to this man, a man clearly on his way to General or even Chief of Staff, what this war has done to the young men he himself commands, what this war has done to him, and everybody else.

With its rich sound design, downright ballsy cinematography, masterful organization by the maniacal helmer, Mr. Coppola, and his editor, one of the greats, Walter Murch, and performances, all perfect, from legends ranging from Brando and Sheen to Robert Duvall, in an Oscar-nominated turn, to small but powerful work from Dennis Hopper, Harrison Ford, and a very young Lawrence Fishburne, I am pleased to add Apocalypse Now (1979) to The List.

"This is the end, beautiful friend, the end." - from the song "The End" (Jim Morrison) 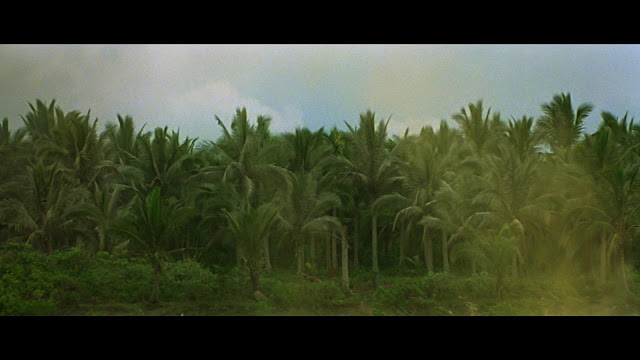 It can't go without mention that the opening sound design of the helicopter, the black screen lightening to this static shot of the jungle, is haunting. Then, that song kicks in, the irony, the end already at the beginning, fire breathes down from the sky, and you're locked in.

(v.o.)"Everyone gets everything he wants. I wanted a mission, and for my sins, they gave me one. Brought it up to me like room service." - Cpt. Willard 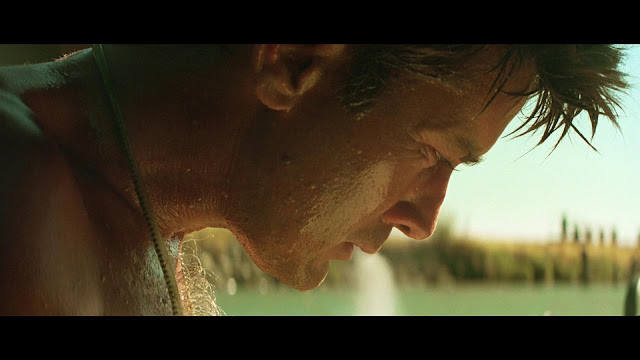 One of the moves Coppola made to keep the early foreshadowing intact throughout the long journey and the deathly violent stops along the way was to have Sheen do a voiceover of certain philosophies and desires of his own while reading passages, documents from Kurtz dossier. Sheen is made of sweat and fear in this film, and smoke, he smokes constantly, the fear and the heat and smoke thick on him, a man doomed only for failure even if he succeeds. 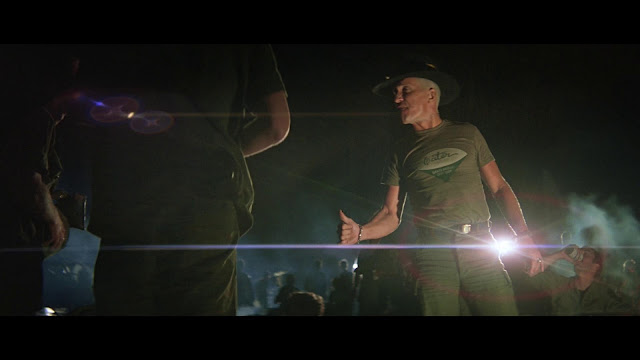 Robert Duvall's maniac 20-minute interlude as the star of the show is one reason to alone to watch this movie. A surfer and surfing aficionado, Lt. Col. Kilgore (Duvall) speaks in long, deep quips and commands, his Air Cavalry (helicopter) unit's calling card on all the Viet-Kong they mow down, camera crews following him around, church services and prayer circles, a random cow, steaks and beers and arguments with his crew about how to fit some good surfing into tomorrow attack. He will be Willard's escort to the mouth of the river. Women and children and civilians and Viet Cong will die in his wake. 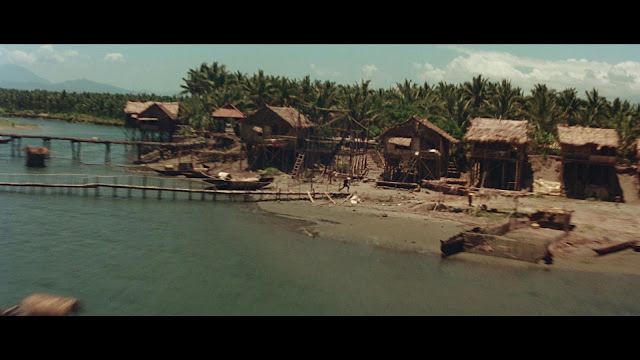 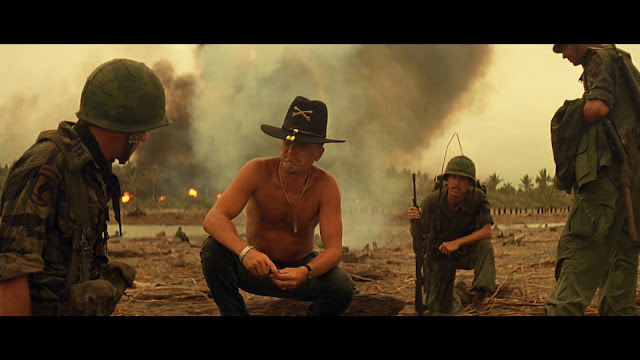 Maybe you were expecting some commentary on that line about napalm and how good it smells. But the truth of Duvall's performance is captured here, Coppola capturing the orange remnants of death by fire, with this small look on his face as he tells Lance (a Navy man, a pro surfer, on Willard's crew and who will soon become a thematic focus of this essay) a truth, that, yes, this war will end, but do I want it to?

These young men still have a chance, the focus of this film is not them though. It is the officers, the men who have spent years by now in country, fighting, witnessing tragedy, committing horrors, hardening to it, loving it. 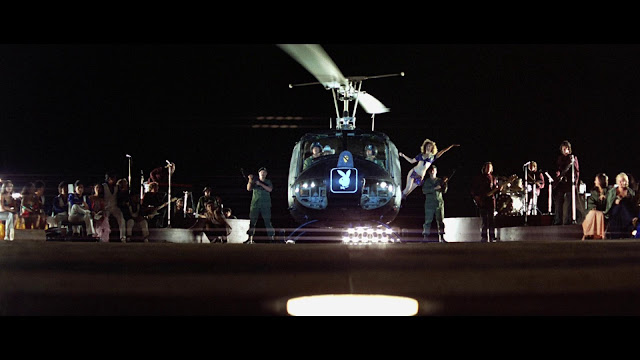 Speaking of not wanting to leave the fighting, how about when Playboy Magazine sends a few Bunnies to a supply outpost along the Nùng River. The lights of a giant stage cutting through the darkness of the jungle. A helicopter again. But this logo is not of death, only hysteria, an illustration, once more, of the instant spoilage of all things home. Nothing is right in this place. Cpt. Willard's plight is the evidenced the strongest here. He's seen it all before, everything is calm for him, this is his home, which is why he doesn't flip out at the sight of scantily-clad centerfolds. 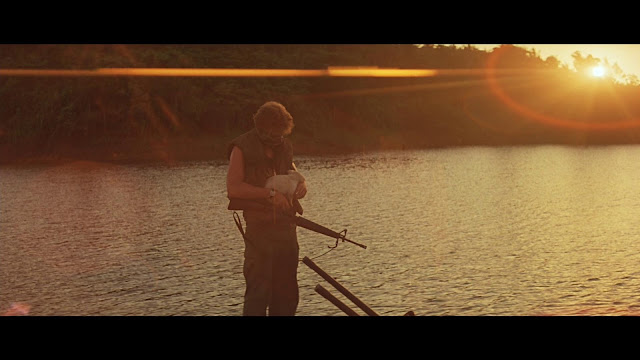 Chaos has been the nature of the game up to this point. Get off the boat, and you get shot up. blown away, or even, in the case of Chef, the high-strung Navy crewman, a tiger chase. But here is where The power struggle emerges, albeit briefly, between Chief (Albert Hall) and Cpt. Willard. The Chief has a job to do, which is to patrol the rivers of Vietnam. The Captain does to, which is to kill Col. Kurtz in Cambodia. These two interests certainly conflict. When Chief ignores the Captain's order to "not get off the boat," a harsh reality is on display, the line between Charlie and civilian no longer there. And the last countrymen standing is a puppy. The disintegration of the self begins...through young Lance, the Navy man who would face death with chemical enlightenment.


"Ain't you!?" - Unnamed Private shooting into oblivion on the Do Lung Bridge 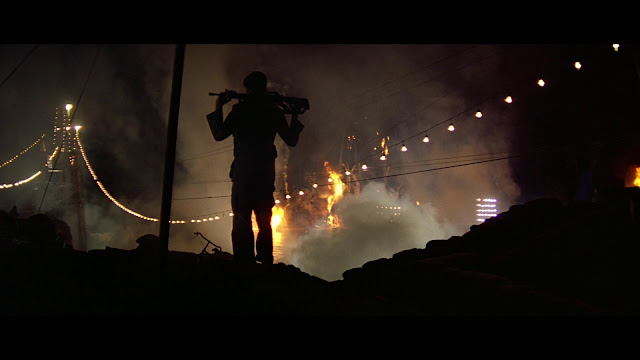 When Cpt. Willard, Chief and crew arrive at the Do Lung Bridge, the last stop on the way to his destination, he is greeted by a soldier delivering the crew's mail, who tells him where he his, "the asshole of the universe, Captain," just as young Lance drops a hit of acid. His ongoing experience prolonged from this view here, a stoned young soldier in the middle of Hell, through the rest of the film and then the war, the atrocity itself, men left alone by the tens of thousands, with nobody to follow.

The area surrounding the bridge is under attack, or has it already been attacked, who is firing on whom, who is in charge, etc. etc.? Coppola uses this utterly chaotic final checkpoint to clarify for us (and Cpt. Willard) the truth of Vietnam, the soldiers were men without leaders for the leaders were gone, either dead, deranged, or desked. "Who's your commanding officer?" Cpt. Willard asks a young man, savagely, randomly firing into the fire. 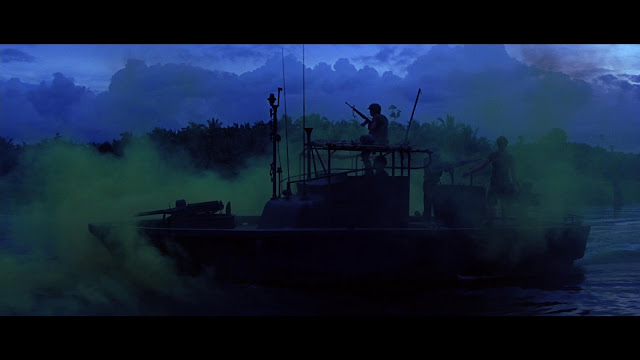 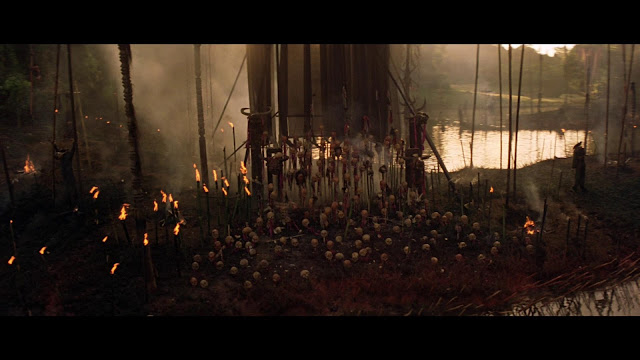 "Are my methods unsound?" - Col. Kurtz 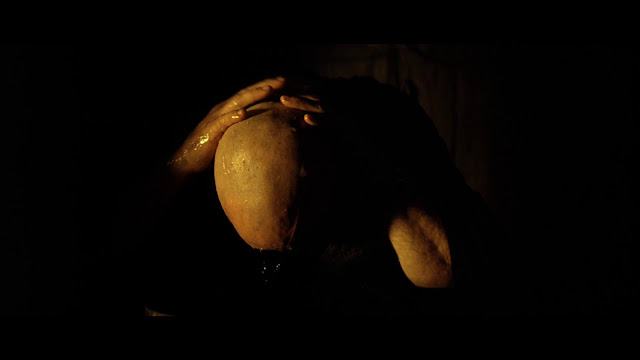 If Willard is fear and smoke, then Brando's Kurtz is fear and water. His is the more pure, not polluted by the brass, he is the brass. To him, Willard is an errand boy. He knows why he's there, and he isn't afraid to die. He speaks in whispered philosophies, stories of the horrors he's seen, legions of American military and locals fighting his war without prejudice or concern. The power of Brando's brief performance lies in that we believe him, we've travelled up the river as far as he has, we've seen it, we see why we would believe in him. We are nearly as far gone. Willard is as well. he just won't admit it. His obsession is like that of Robert Ford, who would murder Jesse James, out of that obsession alone, the admiration becomes envy, the thrill of completing a mission more powerful than the truth you see in your mark. 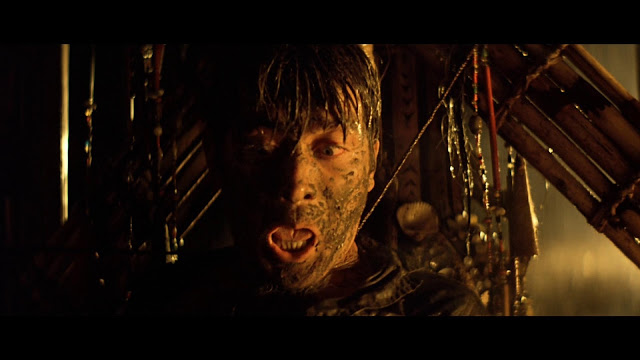 "Shape without form, shade without color." - from "The Hollow Men" by T.S. Eliot, recited by Col. Kurtz as he lurks in the shadows 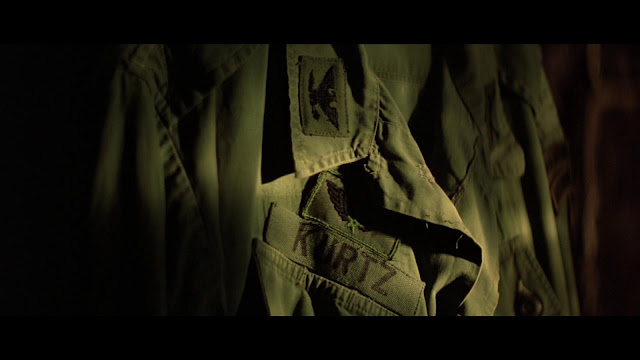 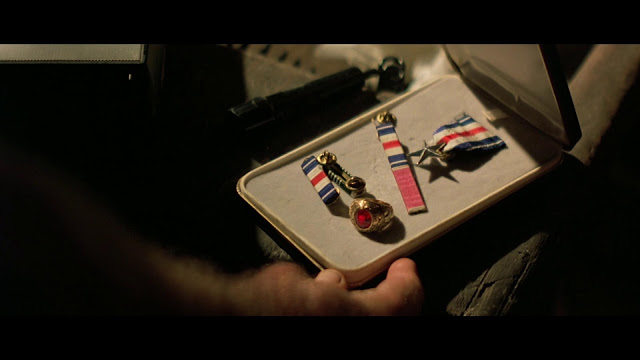 And it's hard not to be obsessed with a man like Kurtz. We don't fault Willard for struggling here. He is an impressive specimen, one who has conquered the war from himself, if for only himself. Even after he both lectures and terrorized Willard and what's left of his Navy escorts, Willard still admires him. Struggles to kill, even after hearing the words (see below) of a man who would gladly die.

"It's impossible for words to describe what is necessary to those who do not know what horror means. Horror. Horror has a face. And you must make a friend of horror." - Col Kurtz 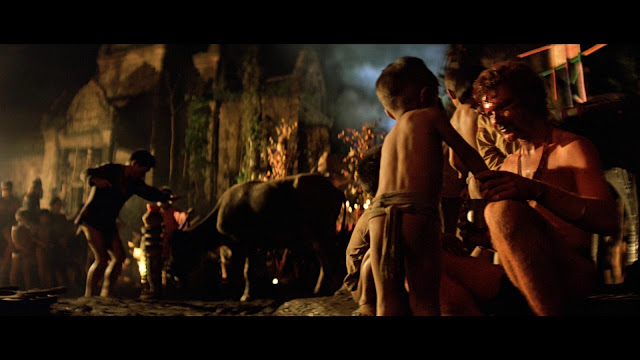 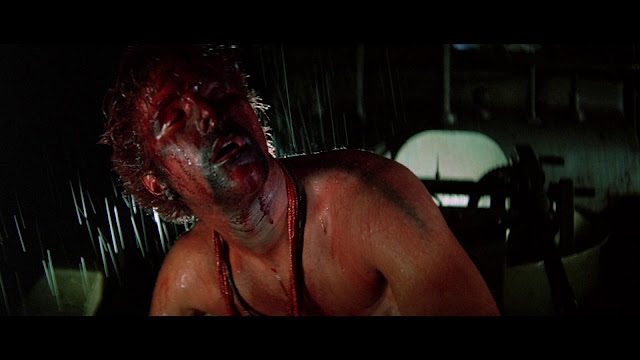 As for Lance, he has been changed. He is still young. He is not injured. The war, we fear, has turned him. Is he too far gone for war? Or not far enough gone? These are the painfully violent, profound questions Coppola leaves us with...questions of fear, death, pain, victory, defeat, sweat, blood, tears, war paint...

The List is a series of essays in quotes and screen caps covering re-watches of my all-time favorite movies. It is named after an actual list I once made of all the movies I wanted to show my girlfriend (now wife) when we first started dating. It is now an ever-growing list of movies we've both seen and love and that I, particularly, find important enough to recommend as essential viewing for any movie lover.