And I've never felt that way before. 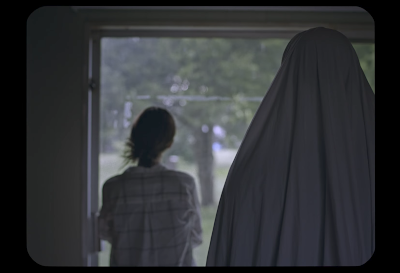 A Brief Reaction to "A Ghost Story"


When I went to see David Lowery's "A Ghost Story," mere hours before it would disappear from the one projector in East Tennessee that had it, I sat in front of an older married couple, who I'm pretty sure were drunk and thought they were there to see an actual "ghost story," like a thriller or something. I don't know...they talked through the whole thing. It was maddening.

Yet, that incident speaks volumes about the utterly unique power of the film. People won't know how to react to it, if they aren't willing to let themselves feel its oddities, and, more importantly, its discomforts.

Casey Affleck and Rooney Mara play a married couple living a quiet life in a modest rural home. Time passes in various ways as time does, sometimes slowly, sometimes quickly. Lowery's camera paces that out. It doesn't move much. We are never really sure when the next cut is coming. Their relationship plays out in silences. They talk about maybe moving, perhaps the wife (the characters aren't named) wants to be closer to town. The husband doesn't. He loves that house and all of its quirks, particularly its sounds. And its a love that they've made together. They hold each other in the early morning hours. Then he dies suddenly. She is alone. He comes back as a white-sheeted ghost. She can't see him. And, yes, she grief eats an entire pie while we watch. And she has to move on. And he can't.

What follows is a journey into the realms of the afterlife that is as haunting as the title suggests and as emotionally effective as any movie I've ever seen. This in spite of the fact that it is so simple. That it telegraphs its twist so obviously early on and even goes so far as to have an insufferable, drunken, bearded hipster pontificate about the very nature of director Lowery's own philosophy, this in a party scene at the film's very center.

In its final, and most successful act, the film somehow manages to take everything it has us betting on, everything we thought we knew and thought we were seeing and then raise. I won't spoil it. But the passage of time gets even deeper than it had already, that we thought possible. And it does this not by holding still but by moving. The small moments of the first act move as a snail's pace, still images framed in that academy ratio, a box with rounded edges (a brilliant stylistic choice). The larger moments, the mind-blowers of the third act come with quicker edits.

And then there's that song and how it blends with the rest of Daniel Hart's brilliant score. And there it is again. And that one time again. And I'm in tears. And I'm not mad at the loud talker. And I love the way I feel. And I've never felt that way before.