The State of the Horror Address

Thought on the Horrors of September, "IT: Chapter One," and Aronofsky's "mother!"

We live in strange times.

I went to see two horror movies in one week...well, that might be a stretch....

I saw a truly great coming-of-age story riding shotgun in a solidly terrifying, if not always original, horror movie.

Then, I saw a claustrophobic fever dream of never-ending extended metaphors in which a movie star makes laps around her house for two hours, the last half hour of which is the most confident filmmaking I've witnessed in a good while.

Both of these movies have been hot topics. Both September releases. Both sold as horror movies. Both offering something way outside the typical norms of the genre. One is a box-office juggernaut and easily in the running for the most popular film of the year. The other has made no money and is simply in the running for most polarizing.

But director Andy Muschietti's adaptation of Stephen King's "IT" takes the early teen "Loser's Club" of one half of King's gargantuan masterpiece, puts them in the late 1980s as opposed to the late 1950s, and casts them with simply the most likable, relatable crew of young actors in years. Think the child casts of 80s classics like "The Goonies" or 90s nostalgia fests like "The Sandlot" or even the current sci-fi favorite "Stranger Things" but in a gruesome, foul-mouthed movie that is both horror and comedy without being a horror-comedy. One that deftly blends the novel's underlying ideas on bullying and child abuse with the fear-induced games of a cackling, monstrous clown called Pennywise (Bill Skarsgård).

It works because not only it is so consistently well-drawn in its characterizations, including Jaeden Lieberher ("St. Vincent", "Midnight Special") as the stuttering Bill Denbrough, grieving the loss of his little brother, Georgie, and the absolute firestorm that is Sophia Lillis as Beverly, the butt of the school's rumor mill, whose home life is more terrifying than any sewer-dwelling monster, but it also is so consistently funny in its teenaged banter. All of "Losers" are sharp characters--Finn Wolfhard's (of "Stranger Things" fame) potty-mouthed, clown-scared wisecracker at the forefront-- and exaclty you'd find in any crew of 9th graders now, in 1989, and forever.

The horror elements are honestly where the movie gets mixed just a smidgen. Honestly, how many times do we need that shimmy-shake run of Pennywise right at the camera? It's the least scary thing about a movie fully of striking, terrifying visions, and it goes back to it more times than I could count.

The movie takes time (too much time) early on to show us every single one of the "Losers" confronted with Pennywise running games on their fears, which is fascinating but just doesn't require seven iterations. It is redundant to say the least. There are three TRULY terrifying encounters with Pennywise and the rest of the fear introduction could've been saved for the BRILLIANT haunted house sequences.

It does a bit better with the human antagonist Henry Bowers (Nicholas Hamilton) in only that he is more choosy on whom he launches his terror. Alas, there is a mess here in his characterization as to just how over-the-top the movie makes him. His bullying is more internally psychotic than the somewhat weak payoff near the end would have us believe.

These are small gripes in the grand scheme. "IT" offered me one of the best times I've had at the movies in a long while. It works on the back of its talented young cast and a dream script by Gary Dauberman re-worked from an earlier script by Cary Fukunaga and Chase Palmer, the former of whom was meant direct but backed out over some differences in how dark and gritty the film should be.

Whatever happened with Muschietti at the helm instead worked.

It worked for me because it became more about kids coming-of-age in finding strength in each other in the face of various horrors than about the horror itself.

Darren Aronofsky's "mother!" is not a horror movie. It is a movie about horror.

It is even moreso a movie about the circle of life, religion, fanaticism, destruction of the environment, and quite simply about the feeling of just wanting your house guests to leave.

Jennifer Lawrence plays a woman never referred to by name but billed as Mother. She is re-modeling the rural farmhouse of her husband Him (Javier Bardem) after a fire has destroyed it. Him is an artist, a poet, stuck in a rut of creation. Enter Man (Ed Harris) and Woman (Michelle Pfeiffer), throwing the stereotypical quirks of their names at their hosts (Man's booze and cigarettes and flattery; Woman's spiked lemonade, criticism, and gossip). Mother wants them out. Him needs the distraction.

There you have a sort of picture of contemporary marriage.

But the tone is played in a minor key. There is a sense of horror in the suspense of not knowing what's next...like not even close. The characters are thin, and we can't grasp their pasts. It's all distant. But the camera is close, really close, and Jennifer Lawrence owns that closeness on her face in every single shot. There were moments where I just knew I was a vision not seen before and several times went Wow! under my breath.

This awareness is meant to start us into projecting our own ideas into the lack of characterization and the lack of story, in general. We are watching a sequence of events fully fabricated with no sense of reality, though very really felt, as some sort of dream, shocks to the system, metaphors urging reader (audience) response and laughing in the face of our need to be entertained.

Why is this movie so confined to this one space? Where is this house? Is it even a house? Or is it merely a symbol, a stand-in? Are Man and Woman Adam and Eve? It seems that way, especially when their two sons enter. Or are they just annoying house guests, in-law types? Is Mother actually Mother Nature? Or is she Mary? Or is she just a woman taken for granted by her husband? Is Him actually God? Or is he really a struggling poet? Is this movie about creation or evolution or both? Is it about the horrors and divisions in our country today? Or is it simply a movie that wants us to ask questions and then try to answer them?

It is all of those things, whatever you want it to be, and it culminates, as previously mentioned, in the most confident, visually terrifying nightmare imaginable.

It treats the audience like a teenager trapped in a movie where his fears come to life.

But we're not teenagers. We're adults. And the fears are larger and recognizable in real life. They are on our news in the morning, in the beliefs we have...or don't...or part of the religions we cling to...or not.

And in the end, it's the simplest, most perfect thing ever, if you're okay with not knowing what it all means. If you're not okay with that, then you will hate this movie.

Either way, Aronofsky, and the major movie studio that backs him and this project, doesn't seem to care. They want you to be an audience with questions, even about the way you see movies.

I put it best, most likely, in my Letterbox'd diary entry in which I decided a full five stars was the right call only to write, "Or 1 star. At one point or another this movie is every star." It, like Paul Thomas Anderson's "Inherent Vice," the last major studio movie to blow my mind like this (though in completely different ways) defies traditional movie scoring or rating systems.

No matter how you score it, for me, it is one of the very best movies of the year.

As for the State of the Horror Movie, I believe it to be alive and well, both old and new, and, now, working as a representation of not only the tricks our fears play on us but also a representation of the horrors of the world we live in, whatever they are to you. 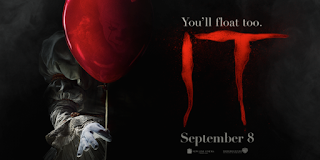 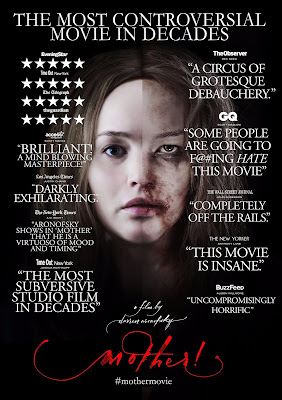