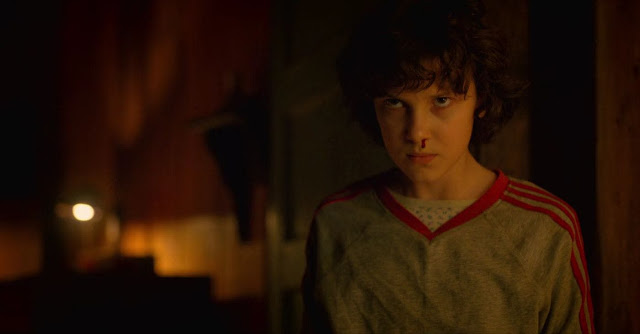 Don’t ever let anyone tell you that that sentimental longing, that wistful affection known as nostalgia is bad or weak, especially in terms of storytelling. People have been trying to do that to me on social media, and I don’t like it. A couple weeks ago, I wrote about two movies that double back on elements that came before within the frameworks their creators set forth for them. One of those movies was from a director named Noah Baumbach, who, in his first film, had one of his characters actually say, “I’m nostalgic for things that happened yesterday.”

That’s pretty much the boat I’m in when I think about how much I already miss being back in the fictional Hawkins, Indiana, and the 1984 world of “Stranger Things 2,” the much-anticipated sequel to Netflix’s smash hit from summer before last…“Stranger Things.”

Dubbed, in its so appropriately meta way, “Stranger Things 2,” instead of just Season 2 of “Stranger Things,” the new season finds itself to be bigger (as in there is so much more to the visual elements), faster (as in I watched it in a binge worthy of my days rifling through “Lost”), and stranger (as in the paths it chooses to explore with its superb cast of young actors).

I'm as up on this show as the next guy, and the next guy is loving this thing nearly as much as the first. If I’m down on anything, it’s only in the fact that the bigger elements, the abundant sci-fi action gets in the way of the brilliant teen drama.

It happily finds new ways to bathe us in 80s nostalgia as well, even down to some of the casting, and it is so much fun. The haters (very few) on my Twitter and Instagram feeds seem down on all of this.

Lucky for me, I could sit in 80s nostalgia all day. My favorite childhood movies, toys, and on and on came from there, and I sit here, after watching nine hours of a TV show in one day, sad at the fact that I don’t have any more to watch.

And The Duffer Brothers, the creators of the series, know that. They know it so well, they even put their characters in Ghostbusters jumpsuits, like the one I wore to school on Halloween one year, and they play music on a background car stereo, the Psychedelic Furs, which blared on the Hi-Fi system in my childhood living room every morning.

They’ve tapped into something perfect twice now. They’ve filled the small town of early-mid 80s Hawkins, Indiana, with amazing visuals, CGI and non. And cast the thing with adult actors we feel nostalgic for and with teen actors so effortless in their performances that we can’t not fall in love with each and every one of them.

And they’ve made something so perfect for middle and high school age kids that you parents of kids that age should shudder at the thought of the vile horror movie garbage in the theaters right now.

Let the nostalgia wash over you. Then, because it’s Netflix and will never go away, Rinse, and Repeat.

Here are 7 things I LOVE about “Stranger Things 2” (SPOILER WARNING! I have tried to not be too specific in my dealings with the plot here, but there will be some spoilers. Proceed with caution.): 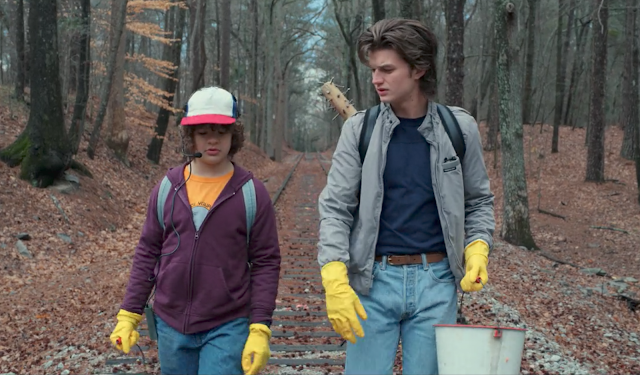 1. The wonderful homages to 80s movies in the casting alone. Paul Reiser comes in as a mysterious doctor at Hawkins Lab, a really wise choice if you remember his villainous character in James Cameron’s “Aliens,” a sequel that also ups the action along with its multitude of scary creatures. And then there’s Sean Astin, playing the new love interest of Winona Ryder’s terrified mother character, Joyce Byers. He IS Mikey from “The Goonies” grown up.

2. Two new additions to the young cast, a girl named Max, an object of desire for at least half of our “party” of dorky boys, and her muscly-mulleted step-brother, Billy, come in as whats-up-with-these-two red herrings (which almost doesn’t work) and leave as part of the fabric of the show. Billy showing up at the Wheelers front door step may be my favorite TV moment of the year.

3. The narrative chances it takes with the famed telekinetic Eleven (played to perfection by Millie Bobby Brown), now hidden in plain sight, painfully away from Mike (Finn Wolfard), who unfortunately doesn’t get as much to do in the separation. The new relationships she does have, though, make up for the lack of Mike and the parental Wheelers. And the brilliant final moments make up for all of this and then some.

4. Likewise, I can’t help but LOVE what this story did with Steve (Joe Keery), High School King and love interest to Mike’s big sister, Nancy (Natalia Dyer). He is given the best arc of the series so far, growing and changing and becoming one part of an unlikely duo. Nancy’s continued adventures with the older Byers (Charlie Heaton) work in new ways as well.

5. The slow-burn of the first few episodes is worth noting. I love that this show continues to take its time with the characters and the, well, nostalgia. It wants to be in the world of the 80s. The KFC line (Steve, again!) is worth a Netflix subscription alone.

6. The performances! This show is acted to perfection. Most notable this season, and rightfully so, is the work from Noah Schnapp as Will Byers, who spent the better part of Season 1 in the upside down and away from viewers. Now, possessed by a lurking evil, he gets to show his chops for real and runs away with this thing.

7. Oh, and even though The Wheelers didn’t get much time, getting to meet Dustin’s mother and Lucas’ little sister was the best comic relief this show could hope for.

Binge-watch! Now! This thing is on Netflix forever!