﻿On the soul of Greta Gerwig's crowd-pleasing "Lady Bird"


It's hard to say what possessed 17-year-old Christine McPherson of Sacramento, California, circa 2002, to change her name to "Lady Bird."

There’s something about the name you’ve been given just as there is no place like home.

I was 17-years-old in the year 2002 and living in Clinton, TN, and the only Lady Bird I ever heard of had the last name Johnson. She was the First Lady for a while. She was from Texas.

Oh, and also from Texas was “King of the Hill” Hank Hill’s dog named Lady Bird. She was named after the First Lady Lady Bird though most likely.

No matter what the connection or lack thereof, “Lady Bird” (in quotes) is certainly the name of one of this year-for-awful-people’s absolute BEST people, a movie character, a classic artsy high school senior at it always with her mother (Laurie Metcalf), herself always at it with the lack of money and her husband’s (Tracy Letts) unemployment, a girl dating her life choices—the theater boy (Lucas Hedges) and the school musical, the rich guy in the band (Timothée Chalamet) and the coffee shop, trying on best friends (Beanie Feldstein and Odeya Rush)—a girl I knew and you knew, another in a duo of career-defining performances from the Irish actress Saoirse Ronan…

….And the new film, the directorial debut of the actress Greta Gerwig, “Lady Bird” is now the best reviewed movie of all time, surpassing “Toy Story 2,” a fact documented by the movie review aggregator website Rotten Tomatoes on Monday.

It's hard to say why this movie is so good, at least without baring your own soul in the process. (I can’t fathom trying to put into words how I connect with this movie, even as simply as how it relates to being 17 in 2002.)

This is a movie about the soul, the old one and the young one and how they’re not so different. “It’s like coming home”…would be its most fitting cliché, and who doesn’t love that one?

Here is what I know to be true:

1. “Lady Bird” is a movie grounded in place and time like only the best visions of memory can be. It is loved because it loves. It’s just one of those movies.

2. Greta Gerwig is amazing behind the camera. I sensed her presence all over this movie and learned things about why I love her as a writer and actress in the process. And her feel for time and place are perfect, from the rapid rhythms of change from one scene or one love interest or one friend to another in such a finite amount of time as a senior year to the feeling of a particular song that plays on the radio too much but, in hearing it with the company of love under a shroud of pain, it enters your soul forever. Little things like that are huge in this film.

3. Saoirse Ronan is amazing at channeling Gerwig’s teen persona. I believe she is “Lady Bird.” She would be called “Lady Bird.” Ronan is as perfect as, if not the perfect opposite of, her 1950s teen immigrant in “Brooklyn” a couple years back. And I love her.

4. Beanie Feldstein, as the best friend Julie, is amazing at being a best friend. I have best friends that good. I love her more here.

5. Lois Smith is amazing at portraying empathy and understanding in every frame she enters. The conversations Lady Bird has with her nun character are priceless.

6. Laurie Metcalf is amazing...simply that. She is a national treasure.

I’d talk about how sweet Tracy Letts’ work here as the supportive father is, how charming (and true), in their own ways, Timothée Chalamet and Lucas Hedges are.

But this is a work of true girl power! 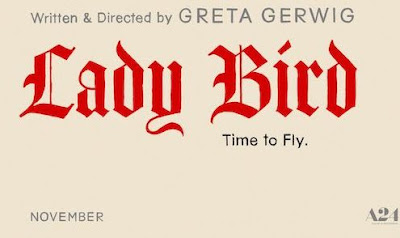 A+/Five Stars—It’s a great movie for all people. It’s an even greater movie for people who went to high school in the early 2000s. It’s a potential game-changer for all high school students anytime, just advise on the R-rating, mostly for language. Please, go see this, all of you.