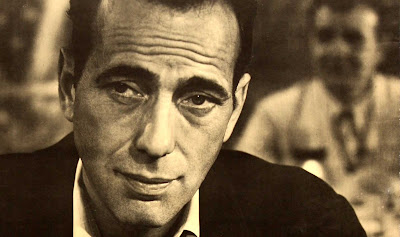 My Mom wanted to watch an old movie on Christmas Eve, so she chose the original film noir, John Huston's 1941 classic "The Maltese Falcon." From there, I realized that Christmas Day was Humphrey Bogart's birthday, so it seemed fitting to just continue with the Warner Bros. star's run of greatness in the 1940s. I skipped "Casablanca," because I've seen it several times.

Here are my takes on three of Bogie's greats (that I hadn't seen):

“She tried to sit in my lap while I was standing up.” THE BIG SLEEP (dir. Howard Hawks, 1946) — This movie is damn near incomprehensible on first watch. But who cares? Bogie and Bacall fire through that dialogue like it’s nothing. And it’s so much more than nothing. In fact, it’s a damn delight — DVD—Best of Warner Bros. 100 Film Collection | Project—Watching Roger Ebert’s Great Movies | #speaksebert #thebigsleep #howardhawks #humphreybogart #laurenbacall #filmnoir #film #movies #movie #cinema
A post shared by Kevin Powers (@speaksmovie) on Dec 25, 2017 at 6:42pm PST

“I know what gold does to men’s souls.” THE TREASURE OF THE SIERRA MADRE (dir. John Huston, 1948) — Now, this is some classic screen acting. You got dirty, greedy Bogie doing his thing. Then, you got Walter Huston in what may be one of my favorite performances of all-time. Thus concludes my accidental-then-on-purpose Humphrey Bogart mini-marathon. — Format—Best of Warner Bros. 100 Film Collection - DVD | Project—Watching Roger Ebert’s Great Movies | #speaksebert #thetreasureofthesierramadre #humphreybogart #western #film #movies #movie #cinema
A post shared by Kevin Powers (@speaksmovie) on Dec 26, 2017 at 5:59pm PST