A review of "Hereditary," the new horror film released by A24

When A24 puts a horror movie on their mega-hype train, we nerdy movie buffs go headlong into it, while the more tradition horror fans show up on opening weekend and start in on their " What was that? It sucked!"

Or maybe they're just the ones who believe quotes like "it's this generation's 'Exorcist'" or "this film that will be talked about for decades"?

I finally got to the new A24 horror release, "Hereditary," knowing as little as possible. I had to literally fight myself off of most reviews. I went in excited. I'm into the critically-acclaimed and always have been. When I left, I wish I hadn't even watched a trailer. Way too much in the trailer. Alas, A24's marketing style made them virtually unavoidable.

But it's a really great scary movie, an even better bleak family drama, gut-wrenchingly, horrifyingly so, and it achieves this, above all, with not only shocking visuals but sound. Only the best ones really go to work with the latter.

Consider a moment late in the film where the Graham family's teenaged pothead son Peter, played by Alex Wolff, is way down the tragic pit of doom into which writer/director Ari Aster's film has thrown him. He awakens from a hellish nightmare alone. He goes to investigate a noise in the dark. We await a jump scare. It comes, not with a usual musical cue but with a terrifying visual we aren't sure we even just saw.

But the real fear isn't in that visual either. It's not even in the classic Hitchcockian anticipation of it. It is this sound of whispering, a humming of some kind so faint I literally whispered to my sister, "What was that?", taking my eyes off the screen to discern whether this was some other patron talking to a friend or some horror emanating from the speakers surrounding the auditorium. When I finally landed on the latter, I knew I was watching a special film.

Toni Collette stars as Annie Graham, a woman who has known some tragedy in her life, has some demons. We first see her speaking at her mother's funeral service, awkwardly acknowledging a number of mourners she's never seen before. Her mother was indeed a mystery, strange it seems, guarded, manipulative. She passed in home hospice care under Annie's roof.

After the funeral, Annie tells her husband, Steve (Gabriel Byrne), that she feels like she should be more sad. Sometimes the loss of a loved one is like that.

Her 13-year-old daughter Charlie (Milly Shapiro) is an odd kid. Shapiro herself is an actress born to be a kid in a horror movie. She has the sort of facial features (amped up with makeup here) that induce the sort of curiosity a film like this demands. She loved her late grandmother. We learn they shared some special bond. Charlie makes miniature human-like figures out of found objects, including the head of a dead bird. She does this little tongue-click noise that resurfaces at random.

Tragedy befalls the Graham family again, an "unspeakable" one...as so many other reviewers have called it. Annie's mind begins to unravel along with each member of the family. Nightmares, both waking and sleeping. Fights full of bottled guilt. Her work, making detailed miniature models mainly of her own life, is going down the drain. She is late on her submission to the art gallery. She looks to group therapy and finds a support there in Joan (Ann Dowd).

But the demons haunting the Grahams are mostly within, inherited, and we are left with the downward spiral of a family. Mix in the late mother's involvement with the occult, and horror ensues.

Director Ari Aster seems mostly interested in exploring how we deal with our pasts in the wake of tragedy, gazing within ourselves. He find horror in genuine human thoughts, and how we often do not dare communicate how we really feel to those we should love the most. There is a dinner table argument and a later scene where Annie checks on her sleeping son that reach levels of domestic pain I've never seen in a movie. Do we cry? Or do we recoil? Credit to Collette for her work in this film. She is worthy of awards for these two scenes alone.

Aster does begin to answer questions from the first couple acts in the end, and he does it in shocking ways. But, above all, he clearly understands that what the mind's eye sees under a shroud of dread and memory is more terrifying than some tangible monster hiding behind the door. As viewers, when we are finally shown the light so to speak, we're never really sure if what we're seeing is actually there or not. THAT is scary in and of itself. That is an achievement.

Like most horror movies, "Hereditary" ends with a shocker that leaves us as viewers also questioning what we saw before, and, if it works for you as it did for me, you'll likely immediately want to see it again...until a couple days later when you're sitting in a dark room at night and can't shake what you saw in the last 15 minutes of this film and you start to doubt if you can handle it again. 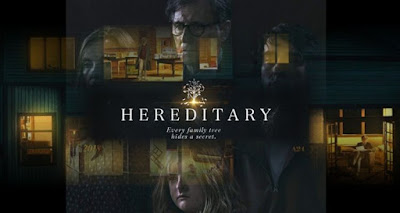