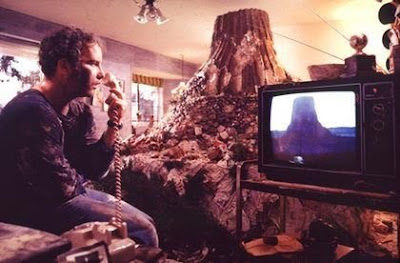 Thoughts on Power, Voice, Choice, and the Manhood through an exploration of Spielberg's Close Encounters of the Third Kind and James Gray's Ad Astra.

As I’m finding my own voice through my particular study of American Literature as a graduate English student, one in which I seek to consider where power, voice, and choice are ill-used, I consider the choices my Dad made that led to the breakup of our family and the power that has had over me. I consider also his lack of choice. My Dad has become a thread in much of the writing I’ve done lately, and I see that continuing through the rest of my grad school journey. In a personal narrative essay I wrote about my Dad’s drug addiction and the last two weeks of his life in the late Fall of 2016, I defined the word Power like this:

"Power is situational. It arises in moments of need. It sits in contrast to control, for it is control that makes us powerless. Power comes from letting go of the need to control, of control itself. Letting go is power, a form of it that is decidedly situational."

For years, I have written about film. I prefer, actually, writing about film than I do novels and poems. Films are every bit as serious and important as fictional literature. The major difference is that a film’s text is underneath the moving pictures that capture our eye. Films are more easily and necessarily revisited because they demand it more so than do books. Fiction writers peel layers back over hundreds of pages of text for us, so we can gather the themes through one solid reading and perhaps a closer skimming of choice passages on preparing to write. Only through revisiting films repeatedly can all the layers be found. You'll see that in the imbalance with which I analyze the two films in question: Steven Spielberg's Close Encounters of the Third Kind (1977) and James Gray's Ad Astra (2019).

Recently, I have been unable to write about movies as much as I like to. It’s actually a hobby of mine, so this particular piece as part of my graduate American Literature journey is surely welcome. A week ago, my wife and I went to see the new Science Fiction film Ad Astra on the big screen. Set in the near future, the movie stars Brad Pitt as an astronaut named Roy McBride, who is tasked with going on a mission to Mars to communicate with his father, Clifford (Tommy Lee Jones), an astronaut presumed dead for decades after a failed mission to search for life on Neptune and the outer reaches of our solar system. Contemplative, moody, and profound, it is probably the best new movie I’ve seen this year. It is also what prompted me to re-watch the classic Spielberg sci-fi family drama and adventure film Close Encounters of the Third Kind, a film I discuss in much detail in paragraphs to come. 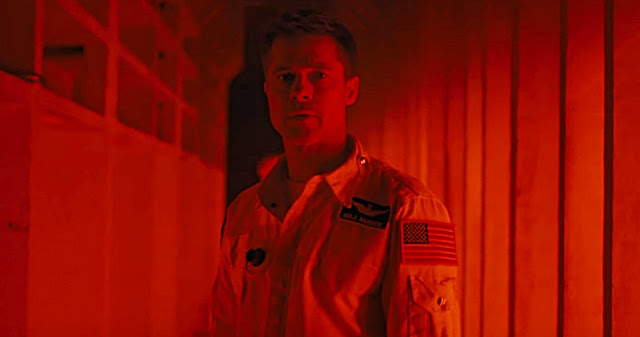 What happens out in space once a man chooses to leave Earth and his family to explore the universe? This is the driving force of power behind Ad Astra. It reminds us of a certain form of masculinity that is borne out of the desire for control. It is also the story of a son emotionally ruined by the loss of his father. Ad Astra is a representation of one of the overarching motifs in science fiction: the absent father. If someone is to explore the universe, who do they leave behind and what trouble is left in the wake? It’s the same story found in last year’s First Man, a biopic of Neil Armstrong, the lovely MCU entry Guardians of the Galaxy: Volume 2, or perhaps the best movie of the decade, Christopher Nolan’s Interstellar.

One Friday night in my early teens, likely middle school (can’t quite remember precisely), I stayed over at my Dad’s apartment. It was his weekend, one of the "every other"s issued him by the court system in his divorce settlement with my Mom about 8 years earlier. I was watching TV in the living room. Dad had gone back to his bedroom to watch TV, to catch some alone time, I suppose. I went back to see what was up, and he said “Hey Kipper! I’m watching Close Encounters of the Third Kind.” And he motioned for me to come sit with him and watch. I was awestruck by it and warmed by the experience of a moment between just me and him. It would be years before I watched it again. When I did, it instantly became one of my favorite movies. Over the years, I’ve watched it at least a dozen times (most recently this morning), and it has occurred to me in the last several viewings that my age has led to a rediscovery of what Steven Spielberg’s epic story of the overtaking of a man’s psyche after a close encounter with a UFO really says about manhood.

Close Encounters struck me, when I was younger, as a wondrous story of a man seeking something grand and finding it in benevolent visiting aliens, who want nothing more than to communicate with the humans of Earth through light and music. They want to take some of us with them, to show us something of intelligent life beyond our universe. It’s easy to become wrapped up in the fun adventurous visual spectacle that Spielberg was able to create in just his third theatrical feature as a director back in 1977. It has become a classic for nothing more than it’s most famous line, as French researcher Claude Lacombe (played by the French New Wave director François Truffaut) through his interpreter David Laughlin (an equally charming Bob Balaban) interrogates the film’s protagonist, Roy Neary (Richard Dreyfuss): “Have you recently had a close encounter?” A shot of Lacombe looking out a window follows, with the camera catching the iconic Devil’s Tower, Wyoming, in reflection, an image burned into the psyches of Roy and the others touched by the lights of those visiting starships. These moments are triumphant, the best qualities the film has to offer, when we see the spaceships, light and camera tricks, coloring the sky.

But what leads to these moments is cause for discussion. Because this is really a movie about divorce, the breaking apart of a family, and the psychological obsessions that lead many men astray. After the brilliant discoveries of the opening of the film in which Lacombe’s team discovers missing WWII planes that have randomly appeared in the desert, we meet Roy Neary and his family in their small home. He is in his own world, building a model train set in his living room. The place is a mess, his three kids argue, the TV blaring, toys scattered, life as a parent in a modern American society. Roy is a Lineman for the electric company in a rural town in Indiana and gets a call to check out a major power outage. A bright light beams down on his work truck. He has just had an encounter with something beyond explanation. It takes him into a mental breakdown that seemed lost on me in earlier viewings before I was married and had kids myself. And his breakdown in some ways mars the triumph of the film’s beautiful ending. Roy leaves his family to journey into space with the aliens. They have chosen him.

Close Encounters is famously inspired by the divorce of Steven Spielberg’s parents, something he has returned to in films throughout his career. The weight of providing for a family, it seems that Spielberg is saying, is too much for some men. Is the ending Spielberg’s wishful thinking that when his Dad left he did so to do and see the impossible? Does he believe that the family was holding his Dad back? Do families do that? In the absence of choice, however, (he didn’t choose to be touched by this encounter) Roy, like my Dad, becomes something of an addict. He likes the mania of his post-encounter life. He tries to include his family but instead alienates them and pushes them away with what, to them, is nothing more than a selfishness they can’t possibly fathom. He tells his wife, “It’s okay. I haven’t felt this good in years,” as he shovels dirt and bricks into his kitchen window, embarrassing them in front of the neighborhood, in order to continue building that nagging vision of Devil’s Tower, seen in shaving cream and mashed potatoes and mounds of dirt, the place he must find to be whole again. And it’s in the family’s living room and kitchen where the greatest flaw of this film can be found: it skips out on developing the pain Roy’s children are enduring as a result of all this, which is something Spielberg “fixed” in later edits of the film, including the Special Edition and Director’s Cut versions, which spends a few more minutes in the Neary home and few less with the aliens at the end.

The most outstanding question becomes: If Roy was chosen by the aliens, did he thus lose his own ability to choose to save his marriage and fix his family? Can obsession be overcome? Can addiction? Drug addicts, and others suffering from obsessive psychological disorders, seek to control their lives with substances, but, in reality, addiction is actually the ultimate loss of control. It seizes its moment of power and breaks families apart. Obsession, faith in something others doubt and deny, chasing a feeling of freedom or release, seeking answers, also like an addiction, carries a stigma to the point where a man must sometimes choose to leave his family.

At the top of this essay, I offered a definition of power in which power can only be attained by letting go of the need to control. When Roy McBride finally finds his father near the end of Ad Astra, what he finds is more complicated than what he lost. In one particular beautifully composed shot, father and son do a sort of dance, tethered together in open space under the rings of Neptune. The older begs his son to let him go, just let go. It is a powerful moment that sparked this whole line of thought about my own Dad and movies we watched together and the pain I felt when he left me back in 1989 and then left me for good in 2016.

The quest for control, that defining trait of manhood, is all over science fiction films. The astronaut is the postmodern explorer, following dreams and obsessions that others can’t understand. Our society stigmatizes these sorts of dreams as all societies have. We ask men to be grounded providers. We deny them paths that may fulfill them. I ask why my Dad chose to leave my family, and why he eventually left forever. Could my Dad not handle the pressure of being a father? Can I? Will I do better? Ad Astra answers these questions, and, in that way, takes over where Close Encounters left off, exemplifying the nature of the best science fiction, the kind that not only gets us to ask questions about what’s out there and what may come but also gets us to ask questions about our limitations as human beings in a vast world beyond our comprehension. 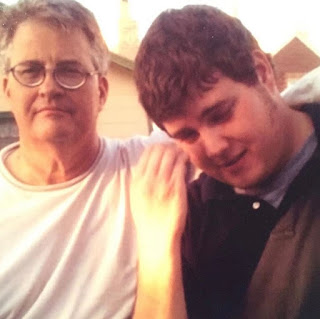