There's a Place for Spielberg's West Side Story, Somehow, Somewhere 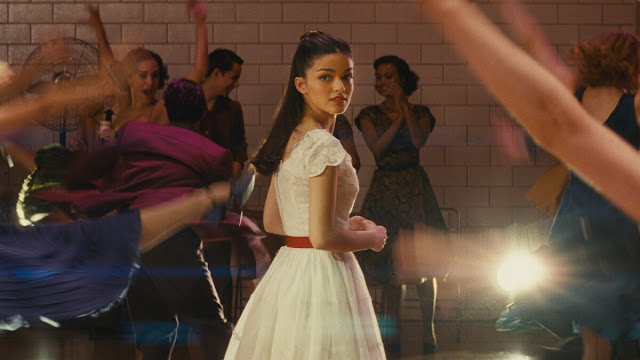 Encouraging All to See Spielberg's West Side Story in a theater before it's too late.
I first saw it when I was in 8th grade. It was in Mr. Moore's Music Appreciation class. And boy! Did I appreciate it. It made me love musicals...forever. I had seen the Disney musicals of the era. I had even seen Grease, an okay musical, one that loses steam early and struggles to land much after "Greased Lightning." But West Side Story...it hit different. It was for me then. I believed in the magic of love. The music of Leonard Bernstein enlivened by Stephen Sondheim's words, metaphors, daggers through the heart of a hopeful boy that would last forever.

Like many people, I shrugged at first at the idea that Steven Spielberg has chosen a remake of the 1961 Best Picture juggernaut, a bona fide classic of American cinema, as his next project. Why? It's so perfect as it is, or was. It had been awhile since I had watched it. Even so, a Spielberg completist, I knew there was no question I would see it and see it on the big screen, right where it surely belongs. The questions I had are not strange. Consider this exchange on my Facebook page the other day, toying with the current discourse in movie critic land, incredulous in reckoning with the fact that latest Spider-Man movie has the third largest opening weekend in American history while West Side Story just fails.

My Post: Did my patriotic duty and saw West Side Story in the theater. Your turn. When will you give your all for the cinema, for America?

First Comment: How was it? I am a movie buff, and have been cautious about a remake of a classic. I wonder what the Beard would think if David Fincher remade Jaws, or Ridley Scott did Close Encounters, or Michael Bay did Indy or ET or Jurassic Park? Did it need a remake? 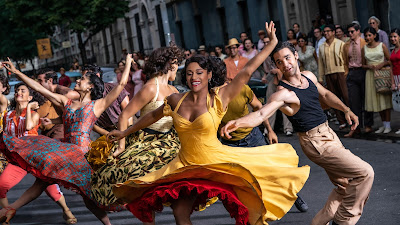 My Reply: It's funny. I had those same questions. Yet, I knew I would see it anyway because I am determined to be a Spielberg completist. What's really funny is this question: Why those questions? Spielberg's Jaws and Close Encounters get remade often...just by different names. Jurassic Park has been sequel-ized and literally remade and resequel-ized. West Side Story was remade last year, as a play on Broadway. Why not another film? I was skeptical myself, but the trailers and reviews got me there. I was stoked to see it. I can say without question that it is Spielberg at the height of his powers single-handedly saving the American cinema...and nobody is seeing it. It is failing at the box office and getting absolutely demolished by the 8th (actually 9th, my bad) Spider-Man movie to come out in the last 19 years. So to answer your question...How was it? It was everything, of the best movies ever made (just like the original is, just as Spielberg almost always has done). It has the music, the dancing, the vibrant colors, the best songs ever written for a musical, all of them. All the artifice of the stage show and original is there but then Spielberg adds his tricks, his flair, grit, humanity, realism. Everything this movie. And nothing. Maybe never again will we have cinematic experiences like this, if we can't even go see a Steven Spielberg movie. Spielberg. Spielberg! Cinema! Go, My Friend! And Take Everyone You Love With You!

So, here's the rest of the story we know so well:

There is Tony (Ansel Elgort), the boy trying to better himself after his path takes him to prison for a stint, even when Riff (Mike Faist) and the rest of the Jets seem bent on deploying the anger of their reality. There is Maria (absolute movie star, Rachel Zegler), the headstrong beauty trying to find her way in America, even though her brother and leader of the Sharks, Bernardo (David Alvarez) and sister-in-law, Anita (Ariana Debose) want her to keep her head down and marry a Puerto Rican guy.

It is such a simple story, the classic one, taking Shakespeare's Romeo and Juliet as its backbone, placing it in a 1950s slum, where rival gangs, the white Jets and the Puerto Rican Sharks, fight...for nothing. In Spielberg's vision, this nothingness is literal, a pile of rubble making way for what will become New York City's famed mecca for the arts, Lincoln Center. A smart call.

In Spielberg's vision, the Jets are actually the hoods the original would have us believe, even as they snap and twirl in the streets, vandalize Puerto Rican business, and sing their song of brotherhood. The Sharks are harder, fully aware of the blessings and curses of their experience as immigrants, the streets again, practical, realistic sets, later making the famed "America" number more breathtaking than ever. Smart calls. There is the undeniable love at first sight at the dance, the fire escape, the heart-pounding gut-punch at the rumble. It's the same in the right ways. 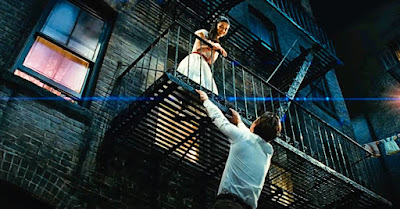 In Spielberg's vision, the rich humor of numbers like "Gee, Officer Krupke" and "I Feel Pretty" remain, but are both transplanted to new settings, again offering a newness that only strengthens the themes of the originals: awareness (or lack) of America's societal failures and even simpler ones like hope for a better future. I will not spoil what Spielberg and writer Tony Kushner decide to do with "Somewhere," but I cried. So, there's also that. The tender moments of love, the duets between Tony and Maria are as classic as the original, gorgeously composed. I was smiling, crying, wholly moved throughout nearly every moment. It's different in the right ways.

Spielberg's vision is the better movie. Yes. It is because he is a master of the moving image, and it has all been building to this. Think of the smooth choreography, the musicality, of an Indiana Jones fight or boys on bicycles flying through the air to save a friend. Spielberg was a wunderkind, nailing down huge TV jobs in his twenties for knowing just how to build suspense with a perfectly placed camera. It is now fifty years later, and he has made his musical, peppering a classic with visual flair he must've been dreaming about all that time. His camera does everything this production does, except sing.

So...this is all to say that you can go and see Spider-Man 9 and should. I will too. Spielberg would want us to. But there's a place...for...this movie. Somewhere...a place...for it. (lol). Go! If we are willing to miss Spielberg on a huge screen, we are willing to miss the best that cinema can be. The Movies are in trouble. West Side Story isn't some elitist arthouse film. It's a spectacle made by Steven Spielberg featuring a supremely talented cast and the best, most legendary, songs ever written for a musical. Don't sell yourself short. Go, take the family, buy tickets, make a thing out of it, and, especially, take your teenage sons, so that they may know not only the visual spectacle of the cinema in total perfection but also the power of song, of dance, of pain, of joy, of love. Movies like this make people better.